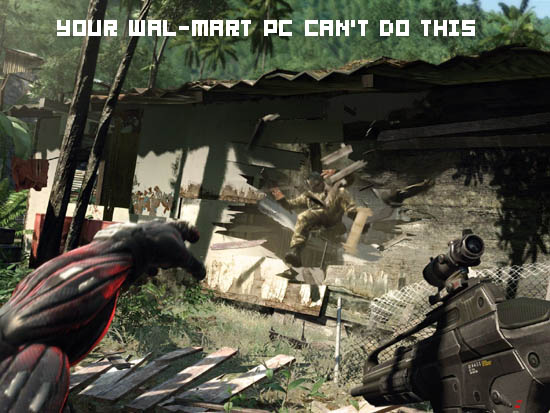 Does the PC need casual games to survive as a gaming platform? Probably not, but a new focus on the growing trend could help in the battle against gaming consoles.

Panelists from Nvidia, Intel, Microsoft, Electronic Arts, and Crytek at GeForce LAN 4 were naturally positive about the state of PC gaming at their panel, but that doesn’t change the fact that PC gaming sales numbers are down, fallling $970 million in 2006 from 2001’s $1.5 billion.

The classic PC gaming complaint is focused at the cost of a PC gaming rig versus a console. Top tier PC titles like Crysis have hardware requirements that are beyond the standard off-the-shelf store system’s specs, where as console gaming’s hottest titles only require a game purchase.

One solution to get PC gaming’s numbers back up is to involve more owners off-the-shelf systems, and casual games could be the perfect vehicle. Panelist Randy Stude, director of Intel’s gaming platform office, agrees: “Something needs to be done so a person buying a PC at Wal-Mart could be a PC gamer too.”

Casual games will have more mass market appeal than current popular PC titles. It seems that many of the top titles are shooters or strategy games that aren’t as easily approachable. Intel VP Dadi Perlmutter recently pointed out that these days PC games seem to involve killing on a mass scale. C|Net’s News.com makes a really good point: people are buying PCs anyway, so why don’t game developers focus on casual yet compelling games for those of us without an itchy trigger finger?

Our take is that the PC doesn’t need casual gaming, but it could definitely help. These easier, more approachable games can be a sort of “gateway drug” for newcomers, and shorter development times and lower development costs could equal more money for PC game makers. It seems like a no brainer, doesn’t it?