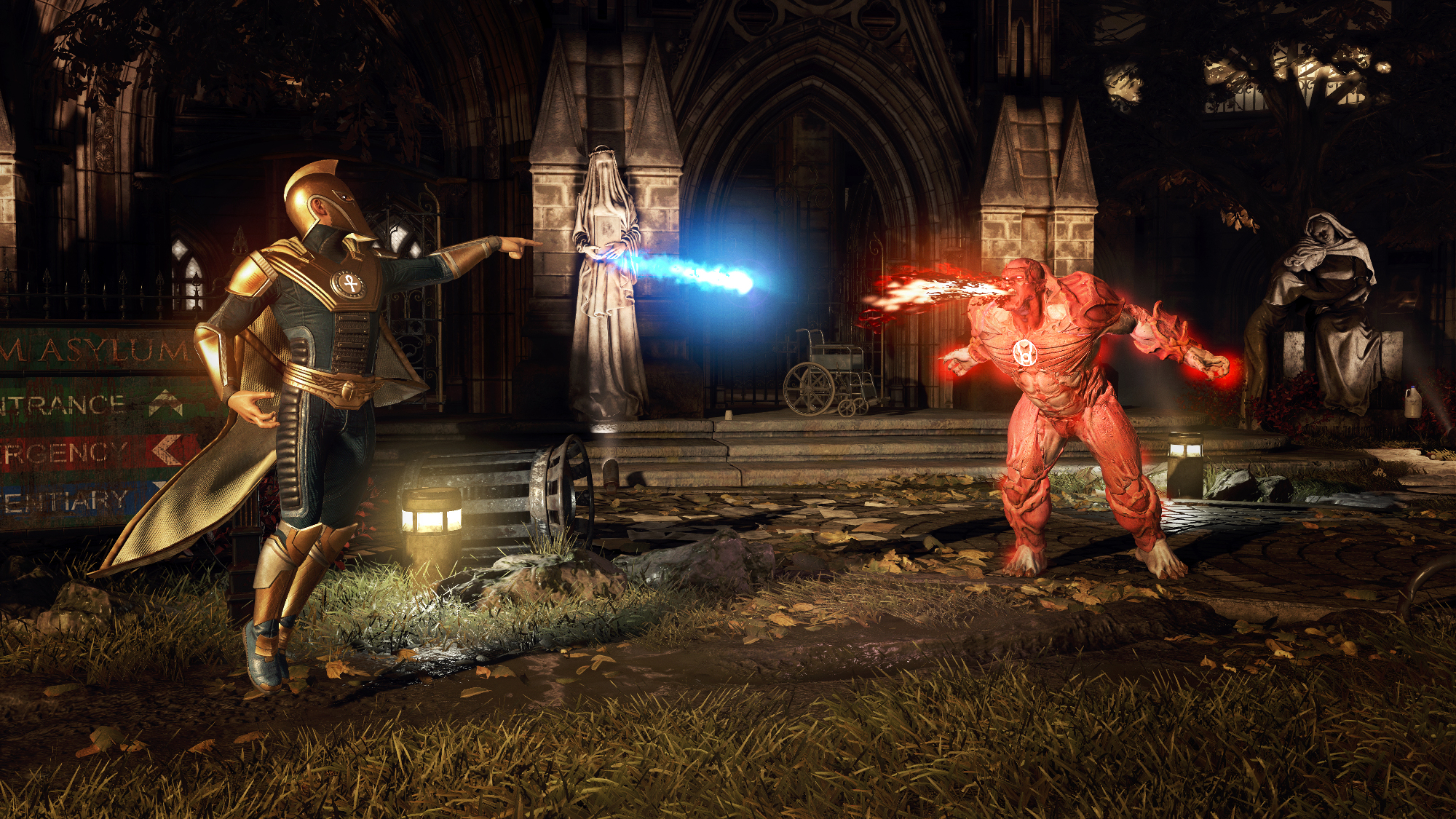 I only know Doctor Fate from his brief appearance in the Young Justice cartoon, but I enjoyed playing him during my hands-on with Injustice 2 here at the Game Developers Conference. For a game as dark and gritty as Injustice — Superman is a fascist, crime-cleansing bad guy now and Batman’s son slices open a man’s throat right in front of him as the ultimate expression of “Fuck you, dad!” teen angst — Doctor Fate’s brighter color scheme and atypical fighting style brought, accidentally or not, a bit of undercutting levity.

In keeping with the tone of the story, most Injustice characters exact horrible, plain violence upon one another. They impale each other with swords and riddle each other with machine guns and punch punch punch until you’re blue in the face. But Doctor Fate fights with magic (comic-book-knowers feels free to yell at me in the comments).

Mostly he is hitting people with Egyptian hieroglyphics. His throw does impale downed foes with a giant gold ankh,  but generally his attacks involve him gently waving his hand around like a music conductor to make shiny magic happen. And Swamp Thing reacts the same way to a blast of blue light from Doctor’s Fate as a punch to the face from Superman. So Fate, when played well (by the computer, against me), starts looking like the ultimate badass, because expending little effort is cool and kicking Superman’s ass by waving your hand around like Minority Report is cool, too.

I am less into the gear system, whereby your favorite heroes get new pants and hats and weapons that make them stronger. All of Injustice 2‘s fighters can be augmented with loot for their head, torso, arms and legs, plus an accessory slot that’s typically a weapon (Swamp Thing has a bunch of clubs, Harley Quinn’s got gats). All these items have a rank from 1 to 20, though they also have randomized stats, meaning there might not be a guaranteed set that everyone online is rocking so that “every time you go online you’re going to see someone totally different.”

It gets deeper, too. You can also unlock color swatches to cosmetically alter your favorites with looks, “[mined] from all the history of DC.” They aren’t all palette swaps either. A snowy Swamp Thing. Batman with a kryptonite-infused set that, when you have all the pieces confers additional stat bonuses, like a bigger bat swarm. The level of minutia seems MMO-like, though I’m not sure that’s what anyone wants from a fighting game, though comic fans might appreciate the deep cuts Easter eggs. The gear can dramatically change things up, though, like giving Deadshot a bazooka that knocks enemies into the air, or giving Supergirl a move that drags opponents along the floor and into the corner.

That said, NetherRealm made it easy enough to equip gear without ruining pacing. After each match you’ll tend to pick up new loot and can quickly compare it to current gear and, if you so desire, immediately equip it. And there’s something neat about being able to change a fighting game character you like to match your playstyle, while the constant drops might foster some sense of progression.

The deep, grindy gear system seems to have something for super fans, but also seems excessive for a hilariously self-serious game that’s the equivalent to mashing action figures together. Maybe it works out fine for Injustice 2 and it seems like it can get out of its own way for people who aren’t paying attention to stat maximizing every stat because the superhero slobber knocker is still at the forefront.