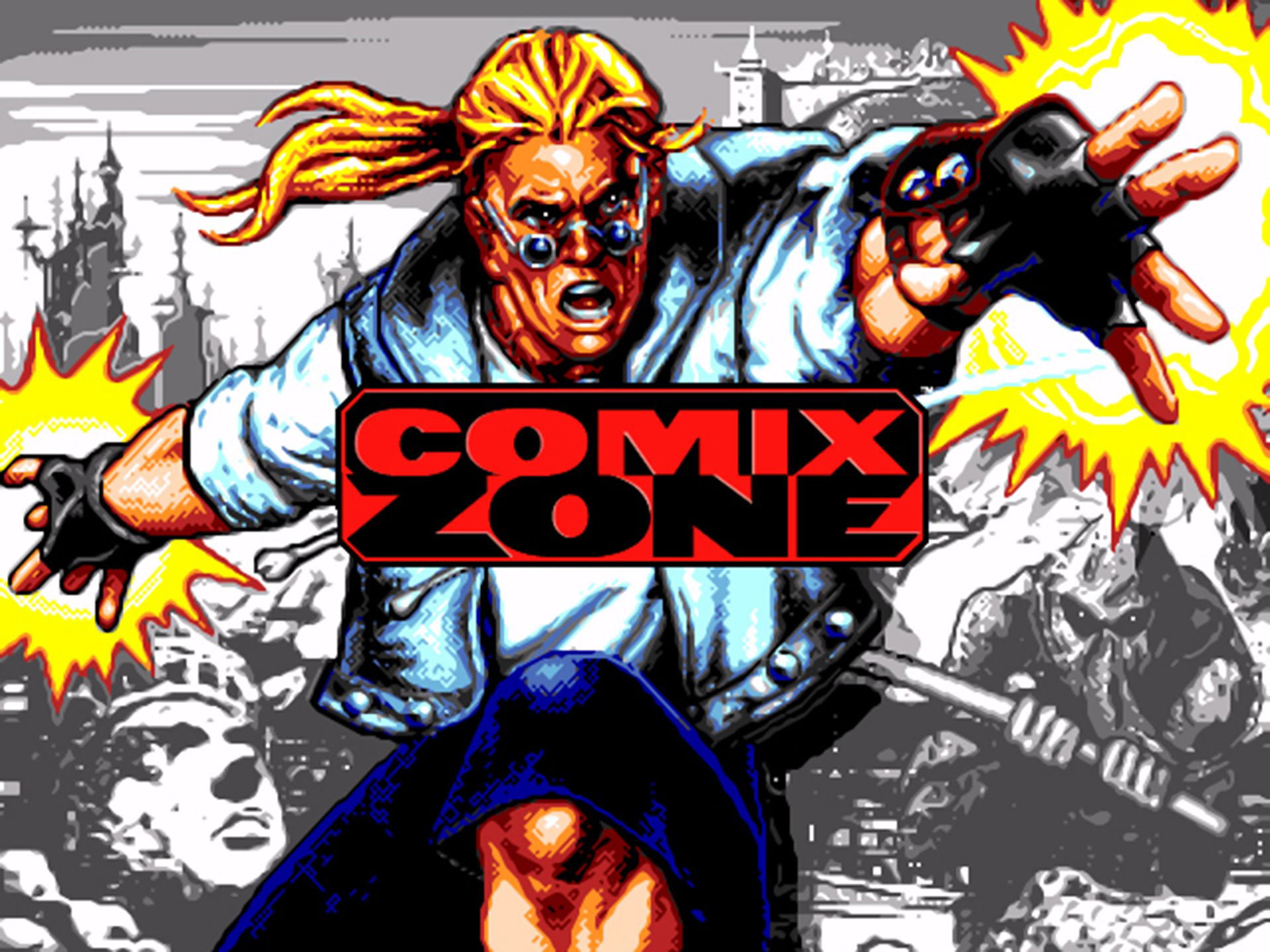 When we were young teens, me and my brother laid claim to the basement. The rest of the house was neat and orderly, a pastel world of floral designs and tasteful drapes. But, the basement was ours. A savage land of hand-me-down sofas, coffee-stained carpets, and a musty dank smell that never, ever, went away. Like any warrior tribe, we felt it necessary to mark our territory. The border between the DMZ of our basement and the rest of the house was the basement door, as made clear by a ritual pasting of clippings, promotional art, and covers from back issues of game magazines and instruction manuals from years gone by.

Right in the exact middle of that collage was a full page ad for Comix Zone.

Neither of us particularly liked that game. It carried no cache, no special meaning to us. But there it was, dead center of the door. Another mystery of the teenage mind.

Comix Zone (released on the Sega Genesis in 1995) was a rental game through and through. It was a side-scrolling beat-’em-up like so many others of its time but WITH A TWIST. The entire game was set inside a comic book. You’d traverse the stage by moving from panel to panel, left-to-right and top-to-bottom, flipping through pages. Sound effects would show up in giant Batman ‘66 style “BOOF” and “BLARG” bubbles. If you got really desperate, you could tear a bit of the background off the page and use it to create a devastating paper airplane to throw at the various mutant and chuds attacking you. A little fourth wall leaning that was pretty forward for the time (for some reason Sega thought this was so earth-shattering that they actually filed a patent for the effect).

It was a cute aesthetic. Cute enough to almost distract from how bog standard and mediocre the rest of the game was for the length of a weekend rental. Almost.

Comix Zone tells the story of Sketch Turner (subtlety was an unexplored concept in the mid-’90s), a freelance comic artist who becomes trapped in his own independent comic. When I think about his character design, I can only imagine the conference room where Poochie the Rockin’ Dog was born. Brothers of the same cynical corporate mother.

Sketch was VERY cool. He has these little round Morpheus shades (four years too early), a ponytail, a super slick cut off hoodie+shorts combo, and of course, fingerless gloves. I know they were going for an edgy artist type mixed with a dash of alt-rock, but he comes across more like an unsavory bike messenger. Even back in the day, Sketch seemed like he was trying too hard. He reminded us of the community theater actors they’d bring in to stage a play explaining why Hepatitis C was a real bad rap, or the dangers of sniffing glue.

Comix Zone was a hard game, harder than it had any right to be. Like other beat-’em-ups from the era, the developers still hadn’t quite worked out how to make the experience work in the home console setting. One foot still firmly planted in the quarter-munching world of the arcade, punishing players with cheap shot after cheap shot. The other foot in the narrative-driven world of consoles, with a story, characters, and nary a high-score list to be seen.

Worst of all, Comix Zone made you play through with only a single life. Absolutely brutal considering the number of pits and tricky stacked battles against multiple enemies it threw at the player. Most stages contained obstacles that forced you to break them to proceed, but (and this is rich) hitting objects chipped away at your health bar. You have one single, bloody life, and Comix Zone would constantly make you lose health punching out a door. Have you ever seen a game over screen because you lost a fight against a deadbolt, or a pile of rubble? Not fun.

Extra lives (more like continues) could be earned by getting further into the later levels, but good luck with that. Like most beat-’em-ups, the path to getting better at Comix Zone was brute memorization, exploiting AI quirks, and above all, random luck. Try to remember where the enemies will appear on screen, where the bombs are going to drop, hope to high heaven that you don’t take too much damage – start over if you do.

It was the kind of game that would be back in the drop-off slot at Blockbuster on Sunday night like clockwork, never to be played again.

So how did this mediocre game end up at the center of our basement door collage? If we were looking for a Genesis game with attitude, why not go with Sonic? Or why not a better, more worthy game to claim this pride of place? The looming keep of Castlevania’s Dracula, the zany action of Gunstar Heroes, or the timelessness of Zelda’s Triforce? Nope. Instead we chose to feature a goofy idiot in bicycle shorts.

The easy answer would be that it looked good there, this ironically rad ‘90s dude leaping out from a page of comic panels, exploding with action. It looked like all the other clipped pictures were radiating out from that blast, a tiny big bang for 16- and 32-bit games localized on our basement door. But honestly, I’m crediting us with a little too much artistic intent for that to be the case.

Maybe it was a sense of nostalgia for a time not too long gone. Comix Zone was a game we played a just a few years earlier as children, but by the time we decorated the basement door, we were young teens well into the PS1 era. Maybe it was our own unconscious celebration of the so-so games we played not that long ago. The also-rans that failed to leave their mark in gaming history, but were the building blocks of our tastes and experiences.