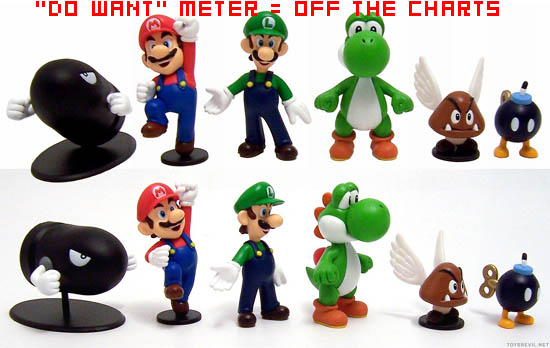 Either you’re the type of gamer that puts on your “cool guy” facade and goes into work, never mentioning a word about video games (except for maybe the socially acceptable Halo series), or you’re the type that’s proud to proclaim that you’re a gamer. If you’re in the latter group, these figures might appeal to you.

I’m a full-blown member of the latter group. I have to swim through game and anime trading figures to make it into my office, and I trip over manga and PSP game boxes on the way. I will definitely be adding these Mario figures from Corgi International to my mess.

The toysRevil blog has pictures of the first six of 24 total Mario-themed figures. We’ve got Mario, Luigi, Yoshi, Bullet Bill, Paragoomba and Bob-omb now, though I hope that Peach and Toad are on the way soon. They’re all to scale, and the smallest is 2cm (goomba?). Each of these figures will come in limited edition tin sets.

UK Web store Gamestation is supposed to have them in stock in December. I’m currently in the process of finding out where else these will be available. More updates later.

For now, I can daydream of having a pile of Bob-ombs on my desk to bury other random figures in. Hit the jump to see more pictures.