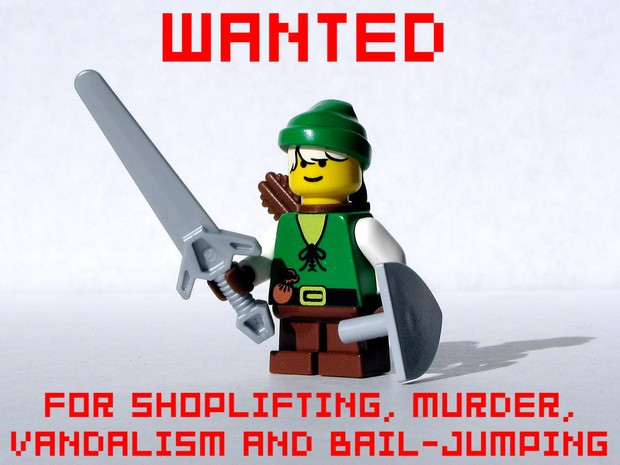 Link’s Awakening on the Nintendo Game Boy was one of the fruits of the success of Link to the Past on the Super Nintendo. A portable episode of Nintendo’s adventure had been a long time coming, and after wading through the SNES game, I lined up the handheld Legend of Zelda for a purchase.

Beforehand, I heard of a way to get an expensive item from a shop without having to pay for it. I believe I watched an episode of Gamesmaster, and it showed the familiar green/yellow tint of the Game Boy screen. Link ran in circles around the shopkeeper to the point that he was looking the other way, leaving Link to run out of the shop with the item. When I had the game myself, I found that if you tried to nip out the shop without paying for something, you’d be stopped from leaving by the alert owner.

That revealed, I decided to have a go at the shoplifting. Around I went several times, and I rushed out the door, prize in hand. However, I was then reminded of the fact that I was not to return to the shop. This warning would lead to the downfall of Link and my positive gaming experience.

I had left the shop, but the reminder not to return was, in theory, only tempting me to go back and check out what would happen. Whether I played a bit of the game afterwards or foolishly had a peek straight away, it didn’t matter; my curiosity was aroused. Like a child that had seen something that looked nice and edible, I took the opportunity regardless of the approaching cost.

I opened the door, stepped into the shop … and this happened …

He killed me. But worse was to come. When I continued through the game, I would walk up to characters to have a chat to them, mainly for information regarding the continuation of the adventure, but always for the entertainment. Sadly, the penny dropped as to how wide-reaching my Winona Ryder-style antics had become.

My name wasn’t Link anymore, or even my own real name, but Thief. ‘Hello Thief, how ya doing?’ ‘Hi Thief, you’re not looking so good. What’s up?’ ‘Thief! The weather is nice today, yeah?’ The name I was now lumbered with felt like an albatross around my neck. The amount of pain that shot through my heart altered depending on the situation. Initially I was humiliated greatly, and as I went along I got used to others calling me Thief. Then, just as I was getting used to it, I’d have an important conversation with a female character, and I’d get hurt and confused again.

In real life, whenever I did something I knew wasn’t right, I’d get some kind of punishment, and I really felt the pain. I wasn’t a goody-goody; I was just trying to go through life without having to have another heavy burden to add to the shoulders, heart or mind. Whichever part of me was afflicted, I just learnt to make sure I wouldn’t have to go around like someone who had their soul ripped out, someone who would do anything for a bit of respite.

Link’s Awakening was a minor example of my suffering after ‘doing the wrong thing’ I easily dropped the matter and got on with my life, since I didn’t get that emotionally involved with it, despite what I felt above. It was interesting, though, that it was one of the first moments of feeling the consequences of doing something illegal in the game world, and getting called out for it.

The problem of guilt was much deeper than the game had reached. I had Obsessive-Compulsive Disorder, and whilst it made me keep on the right side of the tracks, I was suffering badly in later years, getting panic attacks, intrusive images and the constant need to check whether I locked doors. Whenever I felt or did something that made me feel bad, I would react badly, as if the consequence of my action would resonate. At the time, I didn’t know what was wrong with me or why I was feeling this way, but thank goodness I knew what I did in the game was fiction, and that it wouldn’t have ramifications in the real world.

Knowing this now (and having the appropriate medication), I wonder if I would have felt better if I tried that same manoeuvre for the first time now. I’m sure that I would, but to be honest, that just isn’t my gaming style. I try to do the right thing, no matter whether it is Virtua Cop or Grand Theft Auto IV I’m playing. I try to make an effort at cornering in a race car without intending to use the opponent as a brake.

Once again, don’t get me wrong. Just because I’m not a born thief, vandal or killer, it doesn’t mean I’m immune from mistakes, lies or acts of vengeance, verbal or otherwise. I just get hurt if I do them. And the last thing I want to do is to walk down the street with my reputation in pieces. Thank goodness for videogames, eh?