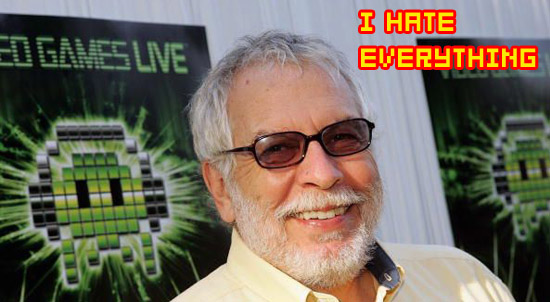 In a recent interview, Nolan Bushnell (founder of Atari and creator of Pong) made some comments that set the gaming world aflame, calling current games “pure, unadulterated trash.” As per the usual, the internet exploded into a bucket of flamewars about the legendary gaming icon, with opinions spanning approval to wishes for his public demise.

Gametap decided to follow up with Bushnell with an interview that addressed his sensational comments and also produced some more food for thought. The following paragraph made a specific impact on me:

What I have consistently been concerned about is sort of the repetition and the lack of innovation. Innovation is one of those things that I value very highly, and I just find that as much as I applaud the beautiful, fantastic production guys of Halo 3, it’s really Doom 1 in different clothing. Clothing or not, the clothing is nicer, but the game is the same. And so is it an economic success to do Halo 3? Absolutely. Is the network connecting architecture fantastic? Yes, it’s wonderful. Is there real innovation? Not a lot.

It begs a question abstractly considered by many before it, but rarely expressed with such cut-to-the-quick directness: Does the overwheming success of franchises such as Halo 3 affect the possibility of more innovative games that “break the mold”, so to speak?

Hit the jump, where I will likely offend someone.

While games have evolved past the wildest dreams of kids who grew up playing 16 bit systems, some of those gamers are disheartened by the direction gaming has moved in. While graphics are more exquisite than ever, the average time spent playing a new game has dropped significantly in the last 20 years. Attention spans have gone down, and gamers will blame a variety of different reasons for it. A frequently voiced complaint is that games are not as good as they used to be. But how can that be true?

Indie developers have always struggled to get their projects to see the light of day, but in the era of Halo, it seems it may be more of a challenge than ever. The bottom line is plain and simple: If you can make a game that makes an enormous amount of money, the need for innovation, breaking the mold and new ideas simply isn’t as valued anymore. If a formula works, follow the formula. While it isn’t the fault of Halo or any other successful franchise, it seems the monetary success of these franchises pushes a lot of less formulaic titles by the wayside.

I champion Halo because it has vaulted the gaming industry to new heights. At the same time, I fear its impact on games that have the capacity to break the mold by being different. Being different from these blockbuster franchises could mean bad in the eyes of an industry that is attracting more and more “Hollywood types.” Nintendo is fortunate in that they were able to use their clout to premiere a console that dared to do something different by changing the control scheme. Despite being a less evolved system, its still outsold its more advanced competitors. Nintendo cured people’s boredom for a while, and that is a great accomplishment.

There is a gamer out there who wants to be challenged, to learn new things, and to step outside of the norm. They can never rival the sheer masses of gamers that love franchises for the comfort of familarity and fun of following a solid series. There’s nothing wrong with either of these types. However, the latter don’t have to worry that the game they want will see the light of day. The former, however, may have something to fight for. Support indie gamers and organizations that promote them all you can if you care about seeing the unusual side of gaming. Or you could move to Japan, where Subway FaceRape Yodel Festival 3 is likely coming out for the DS this week.

Filed under... #Halo#Things gamers do