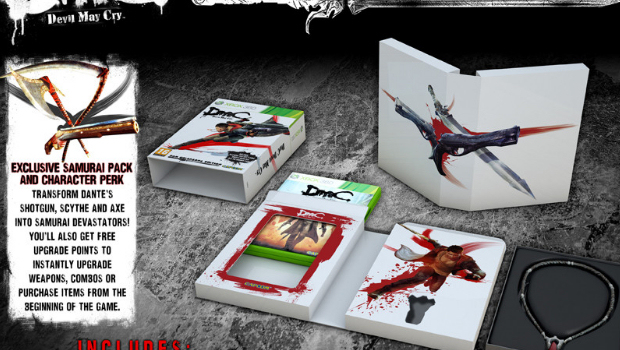 The ever-wise All Games Beta has discovered an image of the limited edition for DmC: Devil May Cry, known more impressively as the Son of Sparda Edition.

As well as flashy packaging, the special edition features the Samurai Pack, a piece of in-game content that turns Dante’s weaponry into “Samurai Devastators.” You also get an upgrade points boost to gain an early edge in the game.

If you’re a fan of physical tat, the offerings a bit less lavish than other special editions. You may have a replica of Dante’s necklace. I hope you like necklaces.

So far, the Son of Sparda edition has only been revealed for Europe. It’s going to be a GameStop exclusive in the United Kingdom, where it’ll retail for £59.99.