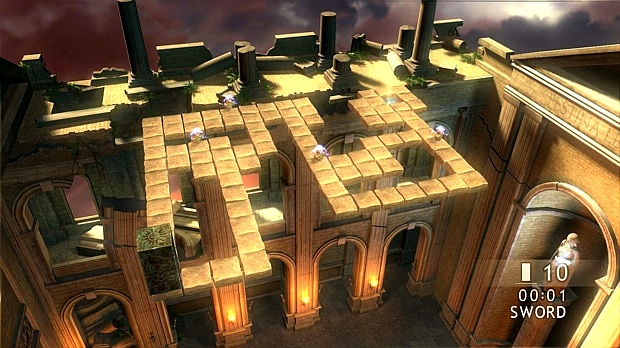 Magic Ball will receive the first batch of downloadable content on April 16. The content is called the “Magic Ball Booster Pack” and will add 25 “witch-themed” levels to the game. Sounds spooky.

Cuboid’s and Mahjong Tales’ DLC isn’t dated, however, we do know what it’s bringing to the table. The “Cuboid Booster Pack” will add 33 new levels to the base game and introduce a nifty level editor that you can use to make your own crazy puzzles and then upload them onto PSN for others to try out. The “Mahjong Tales: Ancient Wisdom Booster Pack” will add 25 new layouts, a level editor, mouse support and level sharing options over PSN as well.

Both Cuboid and Magic Ball will receive in-game custom music support via a patch in the near future as well, because as we all know, downloadable games aren’t fun unless Valley of the Dead is pumping in the background. Hit the break for the press release.

Magic Ball, a fresh spin on classic brick-breaking gameplay in which players bust apart 3D environments, offers gamers new action with the release of the Magic Ball Booster Pack, featuring a whole new world to destroy.  Players will be able to smash their way through 25 all new magical, witch-themed levels, earning a series of new trophies along the way.  Custom music support will also be made available via a free patch download.

Cuboid, a mind-bending 3D puzzle game, will offer gamers three different options for add-on content. The Cuboid Booster Pack contains 33 new levels that will test even the best players’ skills, rewarding gamers with new trophies. The Cuboid Level Editor allows players to become level designers and challenge others with their own custom levels.  Players can either create a brand new level from scratch, or improve upon any existing level, created by other players or taken from the original campaigns. User-created levels can be uploaded to the PSN where they will be made available to other players (who have downloaded the free patch). Players can also earn trophies for creating their own levels, and for rating the levels created by others.

“Gamers are going to thoroughly enjoy the Cuboid Level Editor,” said Anatoly Tikhman, founder and CEO of TikGames. “With this new add-on, anyone can take on the role of game designer to create and share levels with the rest of the Cuboid online community.  Gamers can choose to create simple yet entertaining levels, or try to build levels that will challenge even the most cunning Cuboid players.”

The Cuboid Bundle Pack includes both the Booster Pack (33 new levels) and the Level Editor.  Custom music support for Cuboid is also on its way via a free patch download.

The Mahjong Tales: Ancient Wisdom Booster Pack features 25 all new layouts to beat in Infinity mode, as well as a level editor that allows players to create their own layouts from scratch and share their creations with other gamers by hosting an online multiplayer game on their custom-created level. Players can then save any new customized level that they have created or played via online multiplayer invitation to their HDD. Also included is a series of new trophies, obtainable by only the most dedicated Mahjong players. Highly-requested mouse support will also be made available via a free patch download.

“We are thrilled with the response that our first three PlayStation Network titles have received from both the PlayStation community and the media, and we are excited about releasing these Booster Packs to add to the great gaming experiences that so many PSN players are already  enjoying,” said Vladimir Starzhevsky, CEO of Creat Studios, Inc. “We have listened to our gamers who have repeatedly asked for more levels, level editors and new trophies, and we’re thrilled to be able to deliver on so many of their requests.”

Magic Ball, Mahjong Tales: Ancient Wisdom and Cuboid additional downloadable content will include PLAYSTATION Trophy support and have been rated “E” for Everyone by the Entertainment Software Rating Board for this platform.