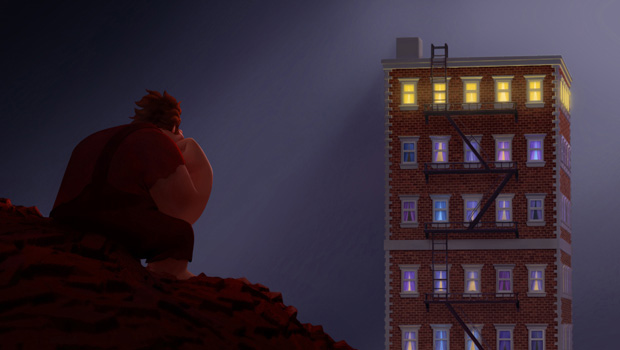 It’s very easy to tune out when Disney announces a new non-Pixar animated film these days. Slowly but surely, the company is starting to recapture some of that old spark with movies like The Princess and the Frog, Tangled, and Winnie the Pooh, but I still get nervous, especially when it comes to CG projects. The main animation studio ought to stick with the hand-drawn stuff, please.

Still, you might want to keep an eye on this next one. Entitled Wreck-It Ralph, it stars John C. “For Your Health” Reilly as the titular Wreck-It Ralph, the villain of a Donkey Kong-ish arcade game who wants to try his hand at being the hero for a change. Not much else about the story is known, but we now have some (what appears to be) concept art of various game worlds, such as a Halo-inspired zone and another that looks like Candy Land.

The movie is scheduled for November, and there is still so much that can go wrong before an official trailer surfaces. Regardless, I’m glad that studios are finally embracing real game lore into their films that isn’t simply the button-mashing zombie using a PS2 controller to play what sounds like an Atari 2600.