Many retro games do hold up. I mean look at the masterpiece that is VVVVVV. Based on a heavily Commodore 64 aesthetic, it uses new-school design but is firmly rooted in an old school foundation. Many retro games are what I like to call “clean,” with simple mechanics that it executes to the letter.

Aladdin Genesis and Lion King SNES (and friends) are not what I’d call fully “clean” games, but as far as licensed joints go, they’re above board. The appeal is certainly limited when it comes to a newer audience, but the comprehensive Disney Classic Games package makes it an easier sell. 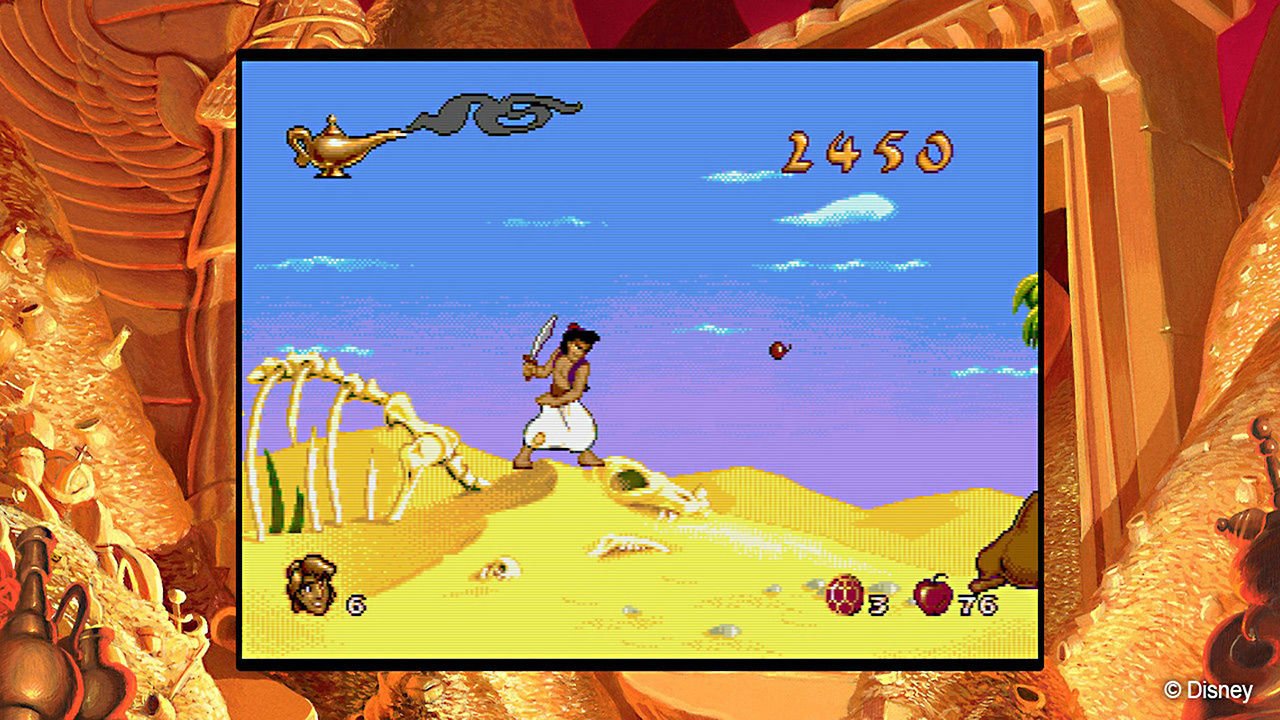 Before I even talk about the games it’s important to note that this collection is legit, and arguably a member of the gold standard in terms of how to treat retro re-releases. Not only does it include multiple versions for each game (Genesis, GB, GBC, Japan-edition, and in the case of The Lion King, SNES), but it also gives you the works in terms of options that eclipse what a mere ROM runthrough would provide.

It has the standard rewind feature, sure, but the “watch” concept, that allows the game to automatically run through any portion of the game for you, is brilliant. It’s been done before, but anyone who’s played The Lion King and remembers the very early “I Just Can’t Wait to be King” stage hurdle, this option is a godsend. It also kind of just does it effortlessly without making such a big deal about it, which is what all these retro packages should be doing baseline.

Digital Eclipse also went the full mile, providing a never-public-before technical demo for Aladdin (and a final cut version with bug fixes), as well as a museum portion that puts most of the “extra” menu options in other collections to shame. I’m talking tons of video (almost a short documentary’s worth) and art from Disney itself. The fact that both of these properties are relevant again with live-action remakes (as polarizing as they may be) is perfect timing, and makes it a fun holiday gift for a hardcore Disney fan (there’s cartoon movie extra art too!). I appreciate that the galleries actually have explanations too, and that they’re not just .jpg dumps.

As for the games, they’re from a very different time where patience was required a portion of the time, and difficulty spikes weren’t as well thought-out. Some levels are a breeze, others can be hellish. That’s where the auto-play feature comes in, but given that I personally want to actually play these games all the way through, a few portions (especially in the Game Boy renditions) nearly aren’t worth the squeeze. The Game Boy ports are also much rougher, especially when playing them directly side-by-side.

There’s two glaring issues with this new release: the price ($29.99) and the complete omission of the best game out of every iteration on the collection, Aladdin SNES by Capcom. Although I dig the Genesis version well enough (the sword is such a nice touch, even if it’s not very Aladdin, who mostly relies on tricks and speed until the very end of the original film), the SNES game is what I’m exactly referring to when I talk about a “clean” retro experience. The art style might not be as ambitious as its Genesis counterpart, but the fundamentals are there to the point where you can easily breeze through it in under an hour without fuss.

With the SNES version in tow it would be a no-brainer, as I still hold that up as one of the best licensed games of all time decades later. As it stands, Digital Eclipse has a lot to be proud of, just be wary that these two games might not be for you.

[This assessment is based on a retail PS4 build of the game provided by the publisher. Disney Classic Games is also available for PC, Xbox One and Switch.]