NIS America has announced that the latest entry in their cataclysmic adventure series Disaster Report is set to head west next year. Disaster Report 4: Summer Memories will be localised for PS4, PC and Nintendo Switch.

The game’s grim concept sees players in the role of a custom protagonist, who arrives in the big city for a job opportunity in the middle of a sweltering summer. The titular disaster strikes when an almighty earthquake hits the city, causing untold devastation. It is the player’s job to guide their protagonist through the dangerous landscape, interacting with fellow survivors, gathering food and resources, and managing both their physical and mental trauma. It ain’t Crash Bandicoot.

Guide your character through the remnants of the ruined city, stay mobile, clean and calm. Help out survivors, or save your own ass. Watch for falling debris, aftershocks, fires and other hazards. With resourceful teamwork and more than a little luck, maybe you can survive the aftermath of the carnage.

Originally planned for PS3, developer Irem halted Disaster Report 4’s scheduled release after the terrible 2011 TÅhoku tsunami – which took place that same week – before the game was eventually cancelled several days later. The licence would then be picked up by developer Granzella, who restarted development from scratch, Disaster Report 4: Summer Memories would finally launch on PS4 in Japan in November 2018, with a Switch port planned for later this year.

Disaster Report 4: Summer Memories will arrive in the west sometime in early 2020 for PS4, PC and Nintendo Switch. A limited edition set is also planned for the console release, which will include the game’s soundtrack CD, along with a backpack, identification tag and “First-Aid” style packaging. 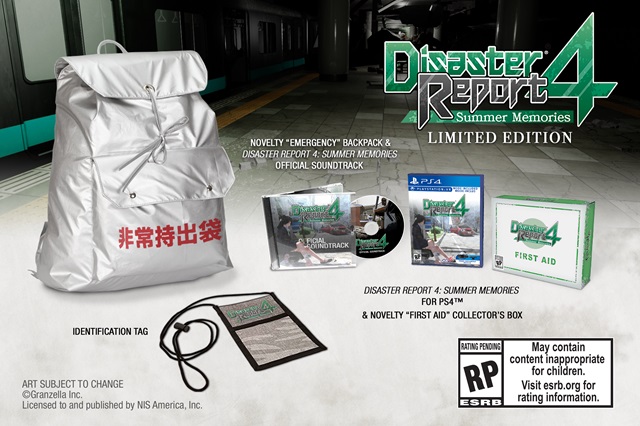