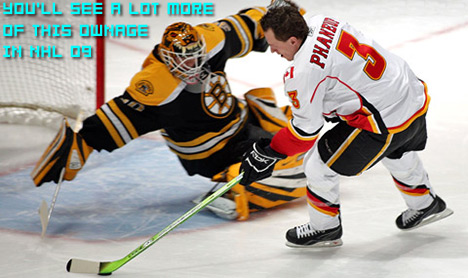 Last fall, I downloaded the PlayStation Network demo of EA Sports’ NHL 08, and while it was only one period of hockey between the 2006-07 season’s Stanley Cup combatants, the Anaheim Ducks and the Ottawa Senators, I fell in love with the game. I’ve always loved a good hockey game — from EA’s Genesis classic, NHL 95, to Sony’s old NHL FaceOff series on the PlayStation, all the way through to NHL 2002 from EA on the PS2, which was the last hockey game I bought — and that demo brought the fun back. Unfortunately, I couldn’t spare the cash for NHL 08 when it came out, but I’ve really been anticipating NHL 09 a lot.

Today, EA revealed that the coverboy for the game will be Dion Phaneuf (that’s DEE-awn fa-NOOF, where the last syllable rhymes with “hoof”), defenseman for the Calgary Flames. Phaneuf has only been playing in the NHL for three seasons, but he’s already established himself as one of the game’s upper-echelon blueliners with two All-Star Game appearances and a nomination for this year’s Norris Trophy, which is awarded to the league’s top defenseman.

However, as a special bonus for Russia and Sweden, the versions of NHL 09 in those countries will feature different NHL stars. Russians will see fellow compatriot Alexander Ovechkin, the young phenom left winger who led the league in goals and points this season with 62 and 112, respectively (he’s only the 19th player in NHL history to reach the 60-goal plateau, and he’s the first to do it since 1996). Ovechkin signed the largest contract in league history with the Washington Capitals this January, a 13-year extension worth $124 million.

Meanwhile, Ottawa Senators right winger Daniel Alfredsson will grace the cover of NHL 09 in Sweden. Alfredsson has been playing in the NHL since 1995, and he has served as the Senators’ captain since 1999. He holds the team’s franchise records for goals (331), assists (516), and points (847). He has also played for Sweden internationally twelve times, including in 2006, when the Swedish national team won the gold medal at the Winter Olympics in Turin, Italy.

You can see five screenshots of Phaneuf in the game in the gallery below, and you can hit up the press release after the jump for more info. NHL 09 will be released on September 9th for the PS3, 360, PS2, and PC.

Redwood City, Calif. – Monday, June 9, 2008 – Electronic Arts Inc. (NASDAQ: ERTS) announced today that Calgary Flames defenseman Dion Phaneuf will be the cover athlete and spokesman for NHL® 09. With just three NHL seasons under his belt, Dion Phaneuf has been nominated for the 2007-2008 Norris Trophy, is a two-time All-Star, and has put up 159 points thus far in his short NHL career. Phaneuf is joined by some of the NHL’s biggest international stars on packaging across Europe, including Alexander Ovechkin (Russia) and Daniel Alfredsson (Sweden). NHL 09 is being developed under the EA SPORTS™ brand by EA Canada in Vancouver, B.C and will be available worldwide this September.

“It is an incredible honor to be named to the cover of NHL 09,” said Phaneuf. “I’ve been a really big fan of the franchise for as long as I can remember and am looking forward to being the face of the game this year, particularly because of the significant improvements that have been made to the defensive game and the new checking engine.”

*with the exception of the countries named below

As the successor to the critically acclaimed NHL 08, winner of seven sports game of the year awards, NHL 09 builds on the momentum of last year, with innovative controls, added depth and new features designed to help newcomers jump into the series.

The revolutionary Skill Stick System evolves to bring an unparalleled level of control to the defensive side of the puck. The all new Defensive Skill Stick gives you the ability to sweep your stick to block passing lanes and lift an opponent’s stick to prevent one-timers. Take your game online with 6 vs. 6 team play, where 12 people can play together on 12 different consoles around the world. With new teams from the Russian, Czech Republic and German Elite leagues, NHL 09 connects hockey fans around the globe like never before.

Players new to the series can now shoot, pass and check with ease. NHL 09 features Be A Pro, a game mode that will put you on the ice with a dynamic new 3rd-person camera that allows you to play the role of one player. With a performance tracker grading your progress in more than 50 categories, you will know exactly where you need to improve to become the next NHL superstar.

**Based on total franchise sales in 2007 according to the NPD.