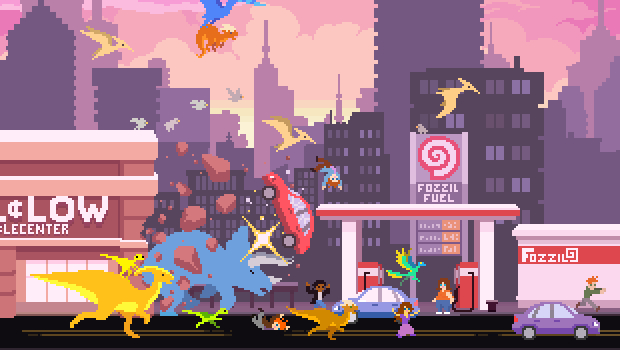 Dino Run is one of PixelJam‘s most popular games, and for good reason. It’s free, simple, deep, and exciting. The newly announced sequel looks like all that and then some. Dino Run 2 was just announced on Kickstarter and it’s aiming high, with multiple playable dinos, beautiful animations, new styles of emergent “Rube Goldberg”-style level design, three different eras to traverse, and all new hats! Scarfs too! Who knew that a little accessorizing could help a Triceratops to become so adorable?

Right now the game’s been announced for Mac, PC, Linux and Ouya, with iOS and Android versions to follow. No stretch goals named yet, but if they make their funding, I wouldn’t be surprised to see this sucker crash onto other consoles as well. If these guys have the skills to play Contra and Gunstar Heroes at the same time in the same room, surely they can pull off an extra port or two.