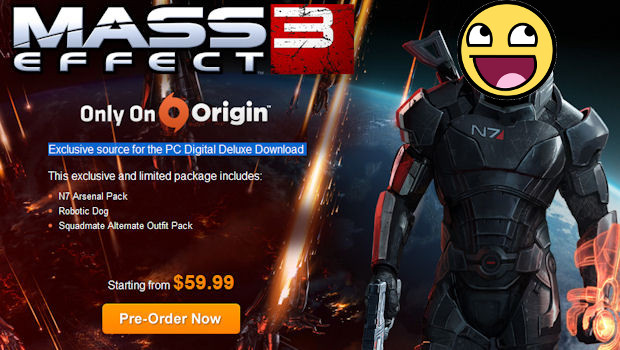 [Our final promotion for our Digital Distribution Bloggers Wanted topic is from meteorscrap. He likes digital distribution, but has some issues with the way certain publishers are going about it. Don’t forget, you still have all weekend to work on your Downloadables blogs. Once Monday comes, a new topic will be posted and late Downloadables blogs won’t be eligible for promotion. — JRo]

Let me state something before I launch into this: In theory, I have nothing against digital distribution as opposed to physical media.

I think it would be great, except that publishers these days aren’t getting it right: They’re not making digital distribution competitive with retail distribution. By doing what they’re doing, they’re creating a negative impression on the average consumer, and in the end I think they’re doing more to damage the transition to purely digital downloads than they are to help it along. The framework is there, but the method they’re pushing right now, put bluntly, is broken.

It’s creating a negative backlash against the idea of digital distribution, and I don’t think that’s a good thing despite my own fondness for discs and DVD cases.

The major issue I see with digital distribution is that with quite a few publishers, we’re seeing digital copies retail for exactly the same cost as physical copies. OnLive wants $49.99 for a copy of Duke Nukem Forever. The so-called “digital deluxe edition” of Mass Effect 3 is pre-selling on EA’s origin for $79.99, the same price I’m likely going to pay for my Limited Edition copy for Xbox 360. Even Steam, vaunted PC platform that it is, is asking for $49.99 for The Witcher 2 and Brink, with Super Street Fighter IV: Arcade Edition rounding things out nicely for $39.99. Even Direct2Drive is in on the shenanigans, asking $59.95 for a copy of Crysis 2.

This is something we’ve seen attempted by console manufacturers as well, with Sony demanding retail prices for digital games through the PSN for the PSP Go, though thankfully that system was short-lived. But even now, I can turn on my Xbox 360 and see digital copies of Black Ops & Modern Warfare 2 selling for $64.99 each. Halo: Reach is still demanding $59.99, and Super Street Fighter IV: Arcade Edition is actually more expensive than retail, requiring $29.99 for the SSFIV and then $15 extra for the Arcade Edition expansion (for a total of $44.99), despite the fact the whole package in a pretty retail box costs $39.99.

Now here’s the thing: As consumers, we know we’re getting screwed when we pay $59.99 for a digital copy as opposed to feeling justified in paying $59.99 for a retail copy. And to be honest, it doesn’t actually have anything to do with holding a real product in our hands, though that is a by-product of why we don’t want to go digital.

See, a digital copy is literally just a bunch of bytes on the publisher’s servers. Depending on the service package the publisher has, the company is probably paying a few cents per gigabyte of transfer. Likewise, depending on the customer’s internet, they can probably expect that the size of the game is well under their transfer limit unless they’re not tech savvy. So the cost for the company putting the game into our hands, as digital distribution consumers, is negligible. I mean, hell… Team Fortress 2 just went Free To Play. While I’m certain they expect people to buy stuff from the MannCo store (or from Steam in general), for them to offer a ten gig game for download on the off chance people will spend a few bucks has gotta mean that transfer isn’t an issue for the publisher in this day and age.

And yet that copy of Mass Effect 3, or Duke Nukem Forever, or Brink, or Super Street Fighter IV: Arcade Edition costs us the same when we do the publisher the favour of using their digital distribution as it does when we go to GameStop and pick up a retail copy. Worse yet, value wise, the digital copy has marked inferiorities to a retail copy, in that you can’t trade it in or otherwise recoup your money if the game turns out to be a flop. You’ve paid your money, the publisher has it, and your only recourse is to angrily delete the game off your hard drive.

See, here’s the thing: When I pay $59.99 for my copy of a game at GameStop, I know I’m paying $59.99 not just to the publisher. No, that money is split between a variety of companies which have allowed the game to get to my hands. The publisher sells the game to a distribution company for at a lower cost, trading the convenience of a bulk purchase for a reduced price. Typically the publisher gets between 40%-45% of the final retail cost, meaning for a game which costs sixty bucks, they typically see about twenty-four to twenty-seven bucks per unit. The distribution company charges companies like Walmart, GameStop, and your local game store a moderately increased fee, probably in the neighbourhood of ten to fifteen bucks more. So by the time GameStop has it, that copy has cost them between thirty-four and forty-one dollars per unit.

So why does a digital copy, which we’ve established does not have the same distribution costs as a retail copy, cost us, the consumer, the same amount? The simple truth is that publishers, bless their coal black hearts, have got a greedy streak a mile wide. They’d love for their consumers to switch to digital distribution, bypassing the need for GameStop, which would eliminate the used game market overnight… But they’re not willing to give us an inch on the pricing in order to coerce us into going along with them.

Now, publishers, look. Let’s not mince words here: Games have been earning you fantastic profits on your best titles at a return of $27 per unit. No matter how much bullshit you try to feed us, we’re not going to bite when you tell us that digital distribution on Microsoft, Sony, or any other platform costs 55%. Hell, EA! You’re your own damned platform right now! There’s no excuse for this!

I’m not asking you to cut your prices in half. That’s not fair to you. But if digital distribution is going to work, it needs to be a compromise between customers, publishers, and the platforms they publish on, not a different way to get the game at the same damned cost. Don’t try to tell me that a digital copy of Modern Warfare 3 needs to be $64.99, because we both know that that statement is bullshit, plain and simple.

I propose we meet halfway. On launch day, make your digital releases an even $39.99. This gives you extra cash for the sale, and more importantly, it’s both an incentive for me to buy digital instead of retail, and if I do, it’s a copy of the game which you’ve sold which I cannot reintroduce into the market if I get bored of it or finish it in a month. More importantly, if I always have that copy, it’s an added venue for you to try to sell me DLC at a later date to try to relight my interest in your game.

“Wait, so the customer benefits, too? I don’t understand how this helps me.”

More important than the launch price, however, is lowering prices as the game ages to attract new customers. Ubisoft, HAWX came out in early 2009, so why is it still thirty freaking dollars on Games on Demand? Microsoft, you and Bungie are in on it too. Halo 3 is not worth thirty dollars for a digital copy. These prices are legacies. You have made your money on these titles. The people willing to pay these ridiculous prices have bought your game already. You’re just fueling the used games industry, where people can buy Halo 3 and HAWX for less, even before you factor in the discount cards GameStop has.

Basically, publishers… If you want digital distribution to start working for you and being your primary sales media as you wish it to be, you need to start making it worth the while for the customers you’re trying to snag.

Because let me tell you something: For $59.99, I’m going to be picking the version which I can loan to a friend or sell back to the store. But if there’s a twenty-dollar difference in the price and I still get to support you more from the sale than I would from a retail purchase, I’m going to be looking at digital distribution in a whole new light. I’m going to want to buy that digital copy because it saves me money, and also gives you more cash to make the games I love.