At a gamescom briefing today, Dylan Cuthbert of Q-Games showed off their brand collaboration with Sony Studios Japan for the first time. PS4 title The Tomorrow Children (temporary title) is quite different from Q-Games’ other titles, but it does share their trademark creativity and imagination. 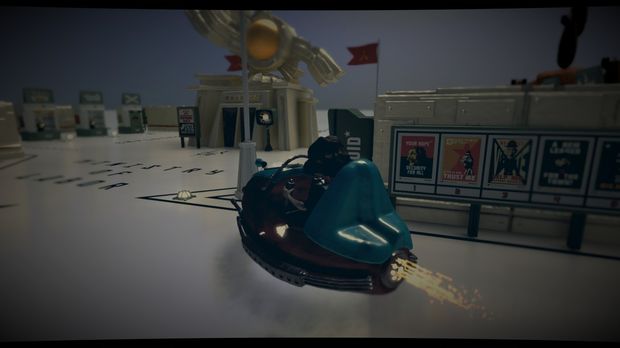 The Tomorrow Children is a single-player experience set in an open world. It’s a network-based game where all players have a shared purpose. So you’ll play alongside each other, and you’ll have a common goal, but you’re all doing your own thing.

That’s not the weird part — the game is set in a future divergent from our own, in what looks like the late 1960s in Soviet Russia. The players are projected clones that look like wooden puppets from Eastern Block countries like the Czech Republic. Among the oddities there are Matryoshka Dolls, shiny Godzilla-like beats, giant metallic spiders, and jetpacks. Yeah.

In this branch of the future, a Soviet scientific experiment went wrong and and almost destroyed the world. Ruined it. The player works as a projected clone in this world, mining resources to rebuild, working to restore the real humanity. 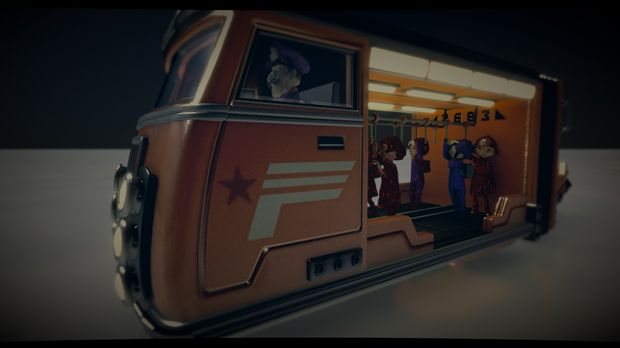 Cuthbert gave us a quick look at how The Tomorrow Children‘s gameplay works. The game is split into two areas: towns and islands. The islands have resources to be mined to help towns operate, thrive, and eventually grow. These islands all represent something from mankind’s past — the first one we saw was a giant pink head with missiles planted around it.

Players can climb these islands and use the tools in their inventory to mine and explore these islands. We watched on as Cuthbert dug a staircase into the face, eventually working his way into an established cave where other players mined alongside him. Resources are gathered and treasures are found during this mining.

There are Matryoshka Dolls that can be gathered from these islands and brought back to town. They represent missing members of humanity, and they can be turned back into humans. Finding these goes towards the ultimate goal of the game — to restore humanity. 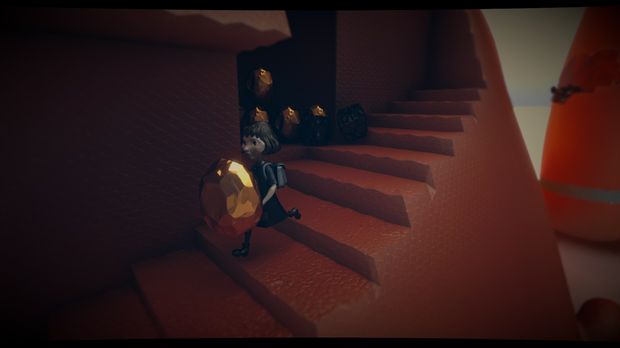 After mining a bit, Cuthbert headed into town in a car. Cars and other craft can be communal resources, though there are also public transportation options like buses. He drove the hover car over a shiny white landscape into town. This town was sparse, containing only a few buildings, trees, and NPCs.

In town, you’ll help build, grow, and sometimes repair the structures there, with the ultimate goal of expanding the town. All others playing will do this alongside you. We watched on as Cuthbert used some of the communal mined resources to repair attacked buildings. While doing this, a giant monster approached the town from the distance. It looked like crystal-covered, metallic space Godzilla. Other players joined Cuthbert in manning turrets to take it down. And when the beast finally fell, it became mineable, just like the islands.

Every action performed in the game — mining, repairing, carrying, dropping, throwing — is recorded and tracked. Checking into a town’s labor office gives you access to a daily report. Actions earn tribute points and ration awards. The tribute points go toward your standing and how the community views the player, while the rations, or Russian Coupons, can be used to by perks, better items, and more. 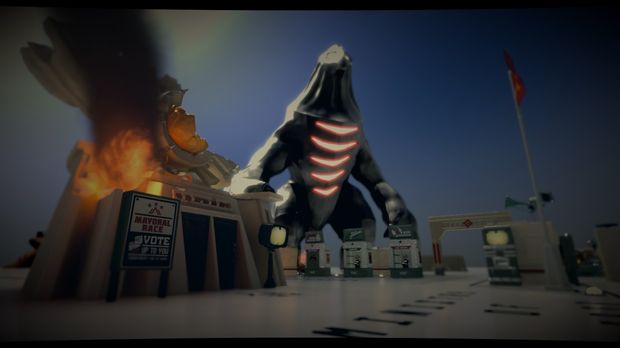 The Tomorrow Children‘s visual design is just as unique and odd as its gameplay. All of the characters look like they’re made of crudely carved wood. Though the visuals are bright and glossy, all of the buildings and characters seem dark and somewhat creepy. But the overall look is impressive. Q-Games has a new lighting technology: cascaded voxel cone ray tracing. Through this, lighting has a full 3D representation, which lets them bounce light properly, give true reflections, and even create true cinematic color grading.

Q-Games and Sony are still figuring out the social side of The Tomorrow Children. We know that they’re aiming for between 50 and 100 people in each town, but they’re still deciding on how they’ll maintain these towns; tests are currently underway. Some of the content will be manually designed while other parts will be procedurally generated.  There are plans to let players work up the ranks. Every town will have a mayor. Elections will let players pick this mayor, which will let them shape the city.

A distorted Marxism simulator is coming to PS4 next year. It’s rare that we get something so different and original.