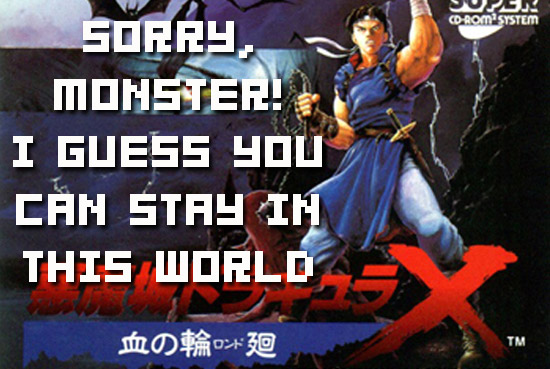 So, extending my… extended Castlevania kick recently, I started playing Dracula X Chronicles on the PSP over the weekend. Firstly, it’s a toe-curlingly good remake — when Richter first crosses the bridge and it begins to rain as the theme plays, your hair will stand on end. Ayami Kojima is one of the best character illustrators in the history of game art, and the whole works just looks great-great-great. A remake of Chi No Rondo was long overdue, and finally having this update on the PSP is like filling in a big, naked gap in your bookshelf. Dude, it’s like you had a collection of really fancy encyclopedias and you just now finally bought the letter “S”.

I can’t freaking beat the first boss.For a while, as I died repeatedly, struggling to get through the first stage, I wondered what the hell was wrong with me. I’ve been playing games since I was quite small, and I’ve fancied myself, if not a competition-quality maestro, at least possessed of a certain competency. Maybe it’s that I’ve only a little while ago gotten a PSP and haven’t had occasion to play much on it, and I’m just not used to it. But the more I thought about it, the more it became clear to me: holy crap, old games are hard. We’ve got it so easy these days.

I recently got Ecco the Dolphin on XBLA, recalling a soothing, intellectually challenging romp through the shimmering sea. But this go-round, my dolphin didn’t romp with intellectual grace. It sort of flopped around on jumps it didn’t clear, bumped spikes repeatedly with its nose, was accosted to death by jellyfish and suffocated in the depths of the sea. “Just gotta… give myself a few minutes to get back into it,” I said, about a dozen times. “I used to be really good at this game.”

I was thinking about this while playing Phantom Hourglass, which I only recently got around to starting. Phantom Hourglass could be the finest title released for DS to date — when I did that double-screen bomb battle with the tornado squid thing, I have to say, I found it pretty amazing. In fact, Phantom Hourglass might possibly be the most technically excellent Zelda title ever made. It’s just so much fun.

I mean, there are some challenging moments, sure. But it made me remember the days when we had to draw game maps ourselves on dot-matrix printer paper just to figure out what the hell was going on, when we couldn’t buy potion without a bottle, and we couldn’t even buy bottles — we’d have to trudge twenty miles uphill in the snow to search for ’em. Phantom Hourglass literally draws you a map, and you can frickin’ pay dudes in dungeons to show you where the treasure chests are.

I feel a little conflicted that the lack of difficulty does not take away from my enjoyment. I mean, I’m not a little kid anymore, and with the comparatively limited time I have to spend on games these days, I appreciate that I can spend it having fun and being engaged, rather than singlemindedly trying to leap the same glitchy, irrational platform gap again and again, or dying repeatedly in the same mazelike dungeon, only to have to start all over at the beginning again and again. I appreciate no longer having to peer dumbfounded at an opaque game mechanic, wondering at the nature of weird power-ups and scrutinizing the inscrutable. And I appreciate that, because of this accessibility, society understands me a little bit better — when people watch me play DS on the subway, generally, they understand what I’m doing and are interested. If I were to hand Phantom Hourglass to a galpal, maybe even one of my parents, for a sec, they’d immediately be able to try it, be able to understand why it’s fun. The era of confounding, grueling button-mashing is mostly over, and we live in a time of “user engagement,” “social gaming,” and lots and lots of talk — from myself, too — about the “reward center.”

But, man, being unable to handle Richter Belmont anymore made me feel soft, inadequate, guilty, like J-Lo pretending she still hangs out in the Bronx. I had become the thing I hated — some impatient adult mashing confusedly at buttons, cringing in embarrassment, and wailing sadly before looking for a pro to hand it back to.

We no longer live in the time of the arcades, and nor does gaming continue on in the arcade-inspired period that lasted way too long, considering home entertainment had become widespread — I’m talking about giving the player “lives” and “credits,” confronting them with “levels,” and pitting them against enormous odds, all in the quest to make them spend as many quarters as possible. Somewhere along the line we realized we have more fun when in-game death is not a final frustration; the autosave developed, the limitless Continues. Developers began to realize they ought to reward, not penalize the player, because games should be fun. Good; great. I’m not saying they shouldn’t. But I feel the anxiety of a warrior in peacetime, and I find myself missing that sense of perverse satisfaction I achieved when I finally conquered a challenging title, mastered an impossible control scheme, discovered a secret room so obscurely hidden, so well-cached that I couldn’t be sure it wasn’t a bug.

I miss the days when I found those kinds of things because I played for hours, practicing, searching, intent on working for my rewards — and not because an NPC shouted for my attention and described the location several times with “hints” so blunt a kindergartener would get it. I am quite sure that a return to that era would suck a lot of the relatively newborn, naturalistic joy out of a gaming space that’s just begun, at long last, to climb the hill toward maturity. But what do you think? Are new games too easy? Do you suck at Ecco the Dolphin, too? And if so, how’s that feel for ya, champ?

Filed under... #Animals#Castlevania#What the hell was that?