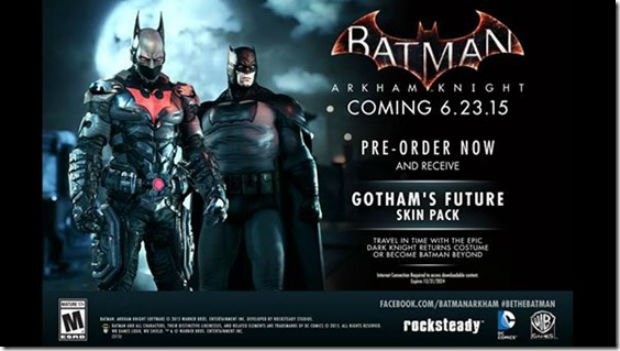 Of course it does

Because WB has to monetize every single facet of their games (hello pay-for-fatalities on top of a Season Pass and lots of paid costume DLC), Batman: Arkham Knight will also feature more pre-order bonuses beyond its $40 Season Pass. Oh, this is in addition to the PS4 exclusive Scarecrow DLC and the Red Hood and Harley DLC.

My God, the sheer amount of DLC this has before the game is even out is astounding.

If you pre-order the game you’ll get the “Gotham’s Future” pack, which includes two skins — Batman Beyond and the Dark Knight Returns costume. Again, I trust Rocksteady as a developer, but WB is making this one hard pill to swallow. An expensive pill at that.