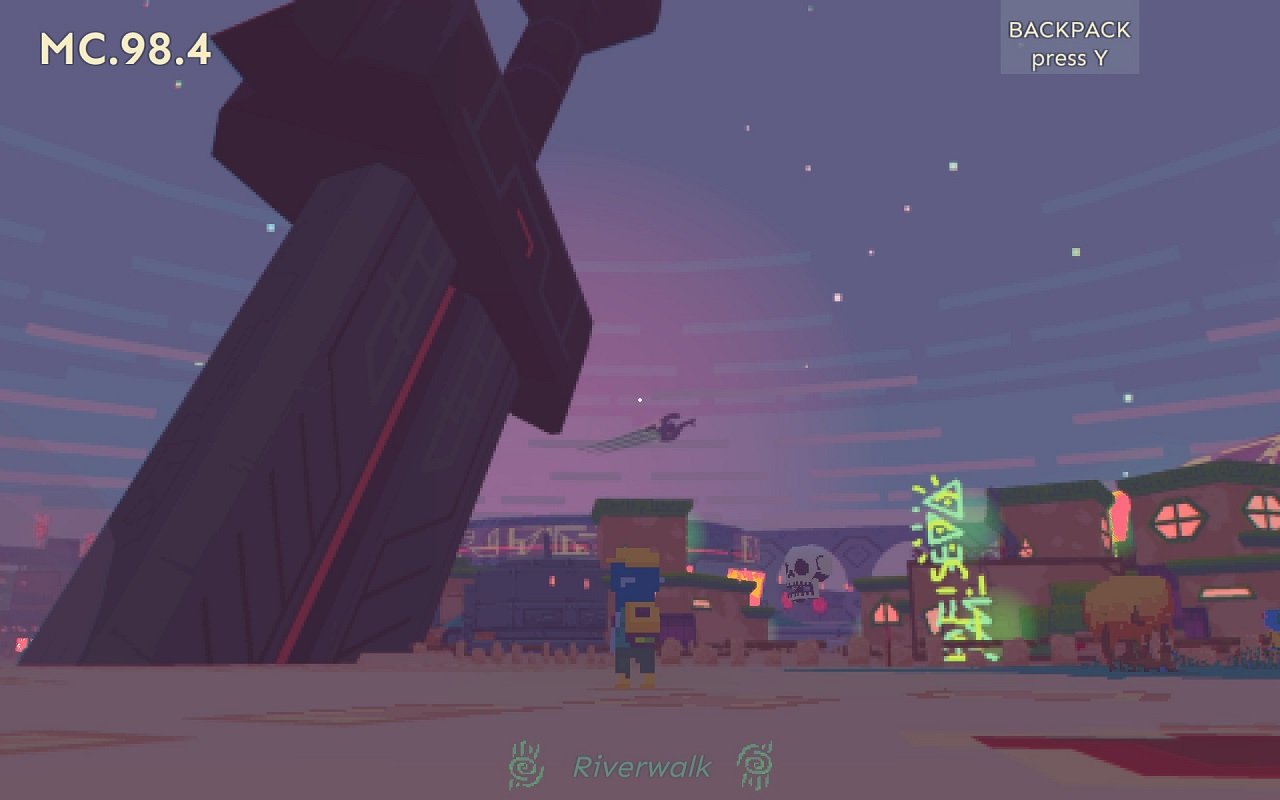 The trash business is a goldmine

It’s difficult to look at Diaries of a Spaceport Janitor and not be impressed. The whole of the game is set in a bustling alien bazaar that’s rife with exotic goods and fortune-seeking travelers. At any moment, Diaries resembles a lo-fi kaleidoscope; the spaceport’s hazy glow of pastel colors shifts with each different district and strange piece of architecture. In the bazaar’s central square, a massive sword protrudes from the ground. A ziggurat stands tall elsewhere, equal parts breathtaking and intimidating.

There’s a sense of life to Diaries of a Spaceport Janitor that makes the bazaar feel special, too. The winding alleyways and color-coded streets are dominated by dozens of price-gouging merchants who, in turn, are kept in business by countless aliens. They come together — shopper and merchant — to create of buzz of extraterrestrial economics that feels rich and vibrant.

But for as intoxicating as the sights and commotion of the bazaar can be, it’s a difficult place to make a living. Whenever money (or Municipal Credits in this case) changes hands (or tendrils, meat sacks, and any other appendage-like alien thing) there is always someone who needs more. In Diaries of a Spaceport Janitor, it’s the titular master of the custodial arts who always seems to be a few credits short. Because unlike so many other games, Diaries is all about being broke, getting by, and chasing the ghost of a better life.

Diaries bills itself as an “anti-adventure game.” It’s a fitting description, really, because most of the game revolves around the Janitor, a blue-toned ‘girlbeast,’ toiling away at the endless task of picking up and incinerating trash.

There’s nothing inherently heroic about cleaning up discarded junk and spoiled food. There is, however, something heroic about pushing forward in the face of adversity. In Diaries’ case, this means waking up each morning and trolling the streets for trash, hoping that you’ll burn enough to secure your next meal. It’s a shitty job, but the Janitor does it with aplomb, because that’s her only means of survival.

At its core, Diaries of a Spaceport Janitor is a focused, street-level view of life in the margins. The Janitor isn’t concerned with politics or world-threatening villains. Instead, she wants to work long enough to maybe — with just a little bit of luck — afford the means to escape the spaceport, bazaar, and her lowly station in life. It’s not the most video game-y set-up, but it’s instantly relatable to anyone who has ever worried about a bill or fretted over making it to the next payday (something bloggers know all too well).

Of course, life never seems to make it simple to just scrape by. Diaries doesn’t make things easy for players, either. In addition to the daily woes of being a few credits short for dinner, the Janitor has a curse to worry about. A disembodied skull follows the Janitor everywhere she goes. It’s an unfortunate and persistent token from a failed treasure hunting expedition that serves as a constant reminder of her place in the world. It can be broken, sure, but that requires time away from work. And time away from work means less money. No one said being the Janitor was easy.

Within a few in-game days, Diaries subtly tricks players into finding a routine. There are steps that can be taken to break the Annoying Skull curse (which lead towards the game’s actual conclusion), but they seem Herculean compared to the simplicity of just walking around and taking care of trash every day. Players can do nothing more than burn discarded containers and barter with merchants, blissfully ignoring the skull’s warbling and the game never seems to care. There’s comfort in routine, and acceptance can lead to happiness, even if it’s in relative poverty; but do you — or the Janitor — really want that?

It’s powerful to think that a simple game can convey struggle without feeling heavy handed. Diaries of a Spaceport Janitor manages to make digital poverty engaging and actually exciting without tons of exposition or explicit directions. There’s just the Janitor, some trash, and a bazaar. Sometimes, keeping things simple is what makes them special. In Diaries, this can be the mundane job of the Janitor, or the pursuit of magic tablets that can break a curse.

Diaries seems to challenge players, daring them to pick whether they will be content with eking by or do whatever it takes to break their curse. Ultimately, it’s up to the player to make the choice, and the game never seems to care which one it is. Just like the beautiful bazaar and its alluring goods seem largely unaware of the Janitor’s existence, Diaries of a Spaceport Janitor doesn’t mind what you do, so long as you do something.