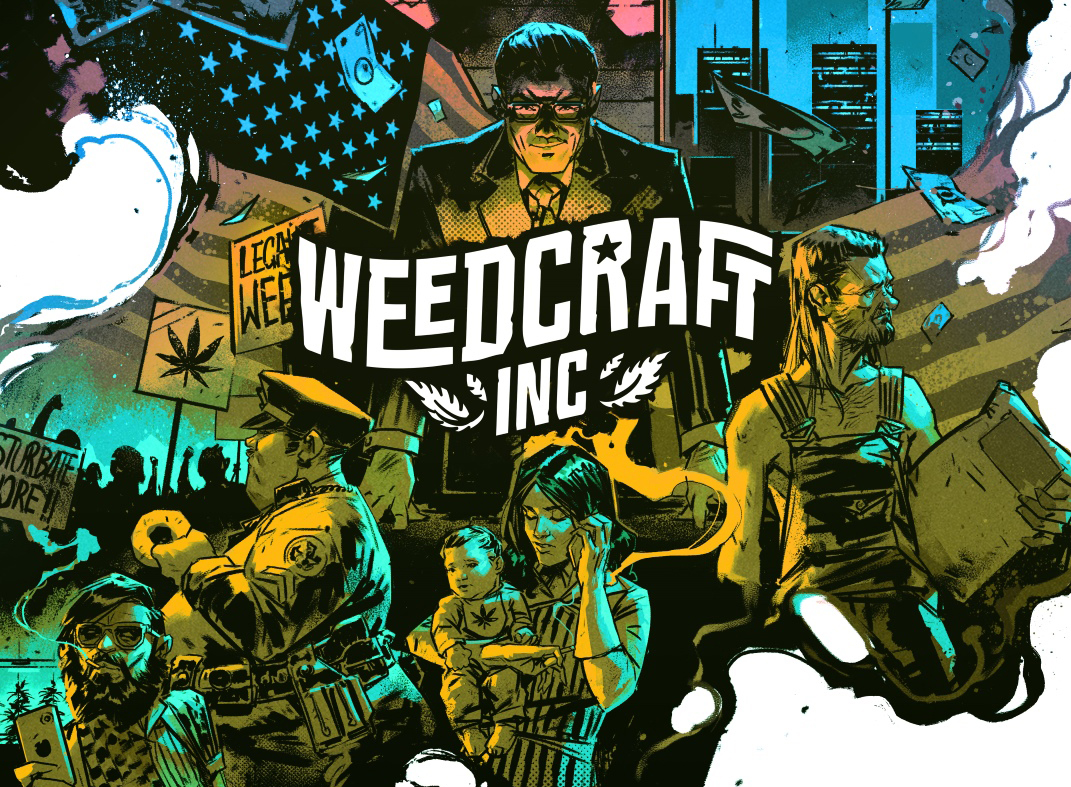 I have to admit my perception of Devolver Digital has been somewhat limited. Until just last week, I primarily knew the company for its candy-cane colored logo with the old-west font, its ostentatious E3 presentations featuring Chief Synergy Officer Nina Struthers, and a handful of games that were mostly violent, top-down shooters. I knew it for Hotline Miami, Titan Souls, and games of a similar ilk. There’s nothing wrong with those titles — in fact, I adore one of the two I just listed — but it’s clear I had a narrow view of the publisher. There is so much more to Devolver Digital than those types of games, and last week in San Francisco, I got a first-hand look at the variety of games the publisher is attaching its name to.

Weedcraft Inc. is an upcoming adventure game from developer Vile Monarch, known for Crush Your Enemies, and games writer Scott Alexander. It’s the first game to be commissioned by Devolver Digital. Far removed from the violent, top-down shooters I normally associate with it, Weedcraft is a business sim that challenges players to build a weed empire while dealing with the complications of running an illicit business. Alexander, who is working with the development team remotely, was on-hand to explain to me that Weedcraft isn’t just some silly marijuana game like the ones you’ll find on mobile with Wiz Khalifa’s name attached; this is a legitimate look at the business of weed.

“The idea was, we looked at this market and saw there have been games about weed, everybody loves weed,” Alexander says, “but most of the games are caricatures of stoners, Cheech & Chong, Pineapple Express-type mindset. This is a really weird, interesting system and a tycoon game is the perfect way to express that. You can just play it straight and all the interestingness will naturally fall out of it.”

Crafting interesting situations is something Alexander is well-versed in. He’s the writer behind the Shadow Warrior reboots, Hard West, Serious Sam 3, and Destructoid favorite Superhot, though he takes no credit for coming up with that title’s spectacular gameplay. His previous titles have featured well-crafted worlds that have embellished themselves with a bit of the fantastic. Weedcraft could have gone in a similar direction by trying to glamorize or idolize the rise of a drug dealer, but Alexander and Vile Monarch are going for a more authentic tone, one that is uniquely American. As Vile Monarch is a Polish company, where recreational cannabis is illegal but medical marijuana is legal, Alexander has had to help curate the experience to match the reality of growing and selling weed in the United States.

“As we’ve evolved the gameplay, I’ve been able to be the subject matter expert on not just weed but weed in the US,” he says. “So when they come back with ‘Here’s how we want this mechanic to work,’ we would be like that really isn’t how it works over here.”

Figuring out how it works over here is a tough nut to crack, even for Americans. Local, state, and federal laws can all interfere with one another, something California is learning the hard way. In researching the story, Alexander tells me he spoke with a variety of people who make up the many different facets of the marijuana industry to get the facts straight. This included people who run dispensaries, people who’ve worked in the black market, Wall-Street brokers, and even graphic designers.

“It’s an industry that cuts across every part of the country,” he explains. “So there is all of the user base, which is far wider than anybody was giving it credit for — not just stoners and college kids — and then all of the industries that serve them. It’s a trillion-dollar industry that’s going from being illegal to legal in the space of 10 years which is crazy. It’s sort of a combination of the end of prohibition and the gold rush mixed together. There’s an immense amount of wealth that’s going to be created for it and a lot of people in the industry who are going to get chewed up.”

Getting chewed up is what players will want to avoid in Weedcraft as they start to move their product. I learn quite quickly starting up the game that there’s no room for the benevolent drug dealer. It’s kill or be killed and for my hands-on, I take control of a pair of brothers who get into the business in Flint, Michigan after their father died. One of the brothers has a business background and the other is a grower, and together they have to build their empire in the middle of America’s mitten while staying one step ahead of the competition and five steps ahead of the police.

My demo is pretty much just the tutorial players will experience when the final game launches. I quickly set up a grow in my dead father’s basement, start producing some skunky weed, and open up shop on a street corner. The actual gameplay of growing weed is simple enough for any simulation fan to understand. Weed requires light, water, and frequent trimming to grow to its absolute best. The more you trim the weed, the more you can water it and both those factors, combined with the chemical make-up of the soil you’re using, will lead to better weed that can sell at higher prices.

In the beginning, prices make all the difference in the world. As a new seller on the scene, my only clients are homeless people, college jocks, and casual smokers who each have a hard price limit on what they’ll spend. My prices, like the quality of my dope, start low, but as I sell and complete objectives, I am able to buy higher-quality equipment and strains. Making and moving product aren’t the only issues I have to deal with. There is also electricity costs, creating a front for my set-up, and the increased presence of police near my operation.

Cops can be paid off and reasoned with which is something I can’t say about my competition. Early in my escapades, I run into a rival dealer who wants to run me out of town. Later in the game, if I face a similar situation, I will have a variety of ways to handle it. But in the first hour, my only option is to drastically undercut their price until it’s unprofitable for them to sell in the same space as me. Once they’re gone, I jack my prices back up.

As the money starts coming in I begin investing in my business. I buy new equipment, a new strain, and hire my first employee to handle the growing side of things so I can focus on selling and keeping the fuzz off my tail. Weedcraft features a detailed conversation system players can use to talk their way out of problems or into another supplier’s good graces. The cop who hangs around my neck of the woods is easy to work with, but it becomes more difficult and costlier for me to stay in business as my operation grows, or as Biggie put it, mo money, mo problems. This plays into one of the many systems players will have to keep track of in the game.

With a variety of ways to approach your business, Alexander and Vile Monarch actually made an incredibly smart choice with the setting of this first scenario. Michigan has only recently fully legalized all use of marijuana in the state, with voters approving to regulate the drug the same it does alcohol.

The campaign in Flint, which runs around 10 hours according to Alexander, is one of two that will be included in the final game (a third will be made available after launch as a free update). The second campaign is the more compelling of the two for me. It features a black man — the demographic most hurt by America’s racist drug laws — who is freed from prison after being busted for selling weed. His partners in business managed to stay out of jail and now have a several-year head-start on the man as he tries to rebuild his weed empire.

The first scenario of the blooming brothers features a sympathetic angle of a sick father, an image that has been pivotal to turning around opinions on legalized marijuana, even if just for medicinal purposes. The second scenario is arguably a far more common reality, especially for people of color, and it’s one that doesn’t necessarily make headlines or get choice write-ups in national newspapers and magazines. Think about all the glowing articles you’ve read about people growing pot for a sick parent or child and then try and remember the last time you read a favorable feature about a black guy who got busted because he grew and sold weed and that’s just what he did for a living.

And that really seems like the end goal of Weedcraft: to present the buying and selling of marijuana as just another business in America. Long gone are the days of Reefer Madness and Cheech & Chong movies. That’s not what weed is anymore, that’s not what a majority of people think weed is anymore. It’s legal in 33 states for medical use. In 10 states it’s legal for recreational. Hemp, the strain of the drug you most certainly do not want to smoke, was legalized nationally in the Farm Bill signed by President Trump at the end of last year. Times are changing and weed is going mainstream, whether people like it or not.

“People seem to be taking pot much more seriously now than they have in the past,” Alexander says. “They’re coming around to the fact that this industry isn’t what it used to be. We have had to deal with the perception issue. There’s a knee-jerk prejudice against marijuana as somehow corrosive to society. We’ve had a couple outlets say they’re not going to cover the game, where it’s literally just a holdover of a rubbish mindset where you could release a game about a beer baron or whiskey tycoon and it wouldn’t receive a similar cultural backlash.”

This simulation is as close as I’ll ever get to actually selling weed as I am a massive square. I don’t even smoke the stuff even though it’s perfectly legal in California. But I do fully support its legalization nationwide, and I believe the only way we’re going to get to 100% legalization beside just having all the old people who hate it die off, is for the many forms of media to change the conversations we have about weed. Weedcraft does just that, eliminating the stigma around smoking and selling weed and presenting the industry as it really is: a massively profitable marketplace where the rich can get richer by using government connections to crush the little guys who’ve been championing legalization for decades. And I can’t think of anything more American than that.

Weedcraft Inc. launches this spring on PC and Mac. Alexander says the developer is looking at other platforms but there is nothing to announce at this time. I will say this game would work wonderfully on any touchscreen device (hint, hint).