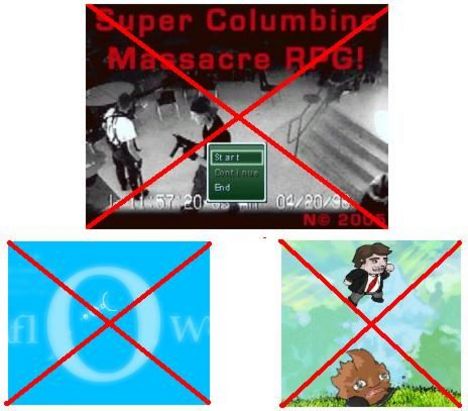 Super Columbine Massacre RPG, the independently-made PC game based on the school shooting in Littleton, Colorado was yanked from the Slamdance Guerilla Gamemaker Competition a few days ago due to overwhelming controversy surrounding the title’s entry.

In protest, several developers have yanked their games from the contest, including Jonathan Blow’s Braid,  Jonathan Mak’s Everyday Shooter, and Kellee Santiago’s flOw, and pretty much all of them have posted open letters to Slamdance on their blogs. Jonathan Mak says it best:

“The game lacks compassion, and I find the Artist’s Statement disingenuous. But despite this, the game does have redeeming value. It does provoke important thoughts, and it does push the boundaries of what games are about. It is composed with more of an eye toward art than most games. Clearly, it belongs at the festival.”

Danny Ledonne, creator of SCMRPG, states that his game exists to initiate conversation, present the events of Columbine from the perspective of the boys, and push the boundaries of what a video game can be. This sounds really great until you actually play the game and find it to be a more or less completely uncompassionate portrayal of the suffering that happened that day. Not to mention the entire second half of the game is one big joke that directly contradicts whatever artistic credibility the game may have earned for itself in the first half (after shooting themselves, the boys go to hell and meet Mario, Mega Man, and Pikachu. They then fight monsters from Doom and then finally Satan, who looks exactly like he does in South Park).

But even so, did the game deserve to be pulled? No. Regardless of how full of BS Ledonne’s excuse for the game is, it does inspire a lot of discussion, it does successfully portray the events of that day through the eyes of Harris and Klebold, and it does redefine what a video game can be.

[Via a reader tip from good ol’ Ryan]