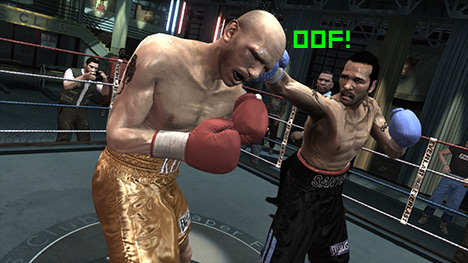 In the realm of boxing videogames, EA’s Fight Night series has been king of the ring for ages. But the series’ fans were taken aback when the studio behind the games, EA Chicago, was closed by EA last year. Last month, EA announced that the next game in the highly regarded series, Fight Night Round 4, will be coming out next year. And boxing fans haven’t had much to occupy their time…until now.

2K Sports will release Don King Presents: Prizefighter tomorrow. The “Don King-a-rific” game was developed by Venom Games, a 2K-owned studio in Newcastle upon Tyne, England; their team was responsible for the PS2/Xbox Rocky and Rocky Legends games. Obviously, the main selling point of Prizefighter is Don King’s involvement and appearance in the game, but 2K is hoping that the gameplay will hold up as well.

Last Friday, I had the distinct pleasure of taking part in a conference call with Matthew Seymour, an Executive Producer at 2K. The call had two special guests: former world heavyweight champion Larry Holmes, and Don King himself. Let me just say at the outset that I’m glad the journalists on the call were all on mute, because once Mr. King came on, I found it very difficult to contain my guffawing. If you’d like to listen to it yourself, Gamertag Radio has put up an MP3 of the call, available here.

I should mention that only the Xbox 360 version of the game was discussed; the Wii and DS versions won’t be out until later this year. Anyway, now that that’s out of the way, hit the jump for my notes from the hour-long call.

As I mentioned in the opening, Don King plays a big part in this game. According to Matthew Seymour, the idea was to create a true-to-life simulation of boxing, but also to provide the lifestyle experience that comes with the territory of being a professional boxer (“2K Sports is about keeping it as real and credible as possible,” he said). He believed that Fight Night was “a bit short” career-wise, so the single-player career is the main focus of Prizefighter.

Accordingly, Seymour talked a lot about what the career in Prizefighter has to offer. He called the career mode a “huge, dramatic experience” — and it does sound really cool. It’s something that Seymour claims has never been done before in a videogame: it’s a live-action sports documentary, and you’re the star. And at fifteen hours, it’s going to be pretty long, too. In the career mode, portions “inside and outside the ring are equally important” — your non-fighting life will impact your performance in boxing matches.

“This is a place where [sic] I think sports games are kinda gonna go towards more,” Seymour explained. He mentioned that in today’s sports culture, fans are always reading about “the bling, and the splash, and the sponsorships” outside of the sports contests, themselves, and that the lifestyle’s temptations are all part of being an athlete. Such temptations include 2007 Penthouse Pet of the Year Heather Vandeven, who Seymour reported was a pleasure to work with (I’ll bet she was). Vandeven appears in a speaking role as a girlfriend of the player.

Things will look and feel real in the ring as well; you’ll see blood, facial deformation, and bruising, but there won’t be any sort of Fight Night-esque cut-healing mini-game. Prizefighter employs the HBO World Championship Boxing commentary duo of Jim Lampley and Emanuel Steward — apparently, it’s the first boxing videogame to feature a color commentator. Gamers will be able to choose from forty licensed boxers, ten of which are “legends” of the sport like Joe Louis and James J. “Cinderella Man” Braddock. Gameplay-wise, Seymour noted that Venom made sure not to make the game as difficult as their last-gen Rocky games, which were a bit on the tough side.

After Seymour gave his overview spiel, Don King and Larry Holmes joined the call, and the atmosphere became one of hilarious, verbose, big-word-using insanity. Seymour told us that King, “an extremely funny man” with many “salacious” war stories, spent three days straight working on the game, including recording voice-overs and videos; he’s one of the “stars of the documentary.” King proceeded to prattle on about the game, among many other things; I can’t really explain what he said, so I’ve included a few pearls of wisdom below for your entertainment:

He went on to call the game “a double grand slam home run,” also something I can’t explain, and he and Holmes left the call shortly afterward. Once Seymour regained control, he talked about the game’s multiplayer modes. Prizefighter will offer standard single-round play online, along with a “Fighter’s Club” area with pound-for-pound, best-man-wins action. In addition, the game supports eight-player tournaments with their own leaderboards separate from the overall online leaderboards. The documentary career allows you to create up to five fighters, and they can be taken online as well. Finally, Seymour touched on some sort of real-time betting mode (not involving real money, of course), but he didn’t go into details.

During the call, Seymour made what I thought was a very appropriate analogy: he compared videogames to movies, but not in the way gamers usually would. The reason that Venom Games decided to put together this documentary-style career mode is that they wanted to bring in the “casual” sports gamers. He talked about how sports fans love sports documentaries and films involving sports (Rookie of the Year or 61*, anyone?) — and then he essentially said, why not take that approach in creating a videogame? It certainly sounds good on paper; but you guys are the ones who’ll have to let them know if they succeeded. Don King Presents: Prizefighter will be in stores tomorrow, June 10, 2008.