Deus Ex: The Fall is a the next entry to the much loved series, heading for iOS this summer, with an Android version coming sometime there after. This may not be what you asked for, but don’t write it off either. Mobile games have come a long way, and I was quite impressed with what I got to play at a recent Square Enix showing. Plus, this will be a nice hold over until whatever the next entry will be for Deus Ex on PCs and consoles.

The Fall represents a true Deus Ex experience, featuring multiple play styles, player choice, and loads of customization. More importantly, these are some of the best controls I’ve seen when it comes to touch screens trying to match physical inputs.

Storywise, The Fall picks up immediately after the events of the Deus Ex: Icarus Effect novel and continues the story of Ben Saxon, which is also taking place shortly after the attack on Sarif Industries during Human Revolution. Ben is part of the Tyrants initially, but doesn’t stick with group for too long when he learns that they lied and tricked him into joining.

Ben breaks away from them and hides out in Costa Rica to maintain a low cover. He’s a cybernetically enhanced soldier though, and soon has to come out of hiding to find some neuropozyne as his body is rejecting the cyber implants. From here, Ben learns that there’s a global shortage of the vital drug, and will go about unraveling the conspiracy surrounding all this that threatens the world over.

The story should take you about five hours to complete from start to finish. Of course, this is a Deus Ex game and you’ll want to replay thanks to all the options presented. You can play through the game action hero-like, or be a pacifistic throughout the entire thing and not kill a single person ever. Plus there’s dialogue choices that opens and closes different paths of the branching story.

There’s up to 29 different weapons to find, with plenty of upgrades and attachments that can be placed on them. Plus of course you can upgrade Ben’s skills, improving his combat, hacking, or stealth abilities. The inventory and store have been combined for mobile, so you can buy weapons, Praxis, and ammo whenever you want.

While you will earn in-game credits, you can also spend real cash to accelerate your progress in purchasing weapons and the sort. That said, you never have to spend any cash outside the initial purchase of the game, and performing three playthroughs of the story (that features new game plus mode) will get you everything the game has to offer. 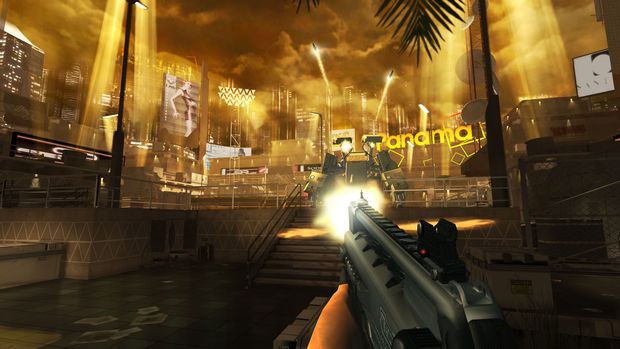 As for the controls, given the limitations of touch screens. Movement happens via dual virtual thumbsticks (the virtual sticks can be shown or hidden) or you can use single and/or double tap to move through your environment. Tapping against walls will put you into cover, vaulting over objects replaces jumping, and you can either manually aim or tap to lock-on to targets to fire your weapons. Plus the takedowns — lethal and non-lethal — are all streamlined into the experience.

Moving Ben around felt great, and the controls were very tight. At the end of the day, would I prefer a controller to play? Yes, of course, for any game. But for once I didn’t mind using touch based inputs in an experience like this. 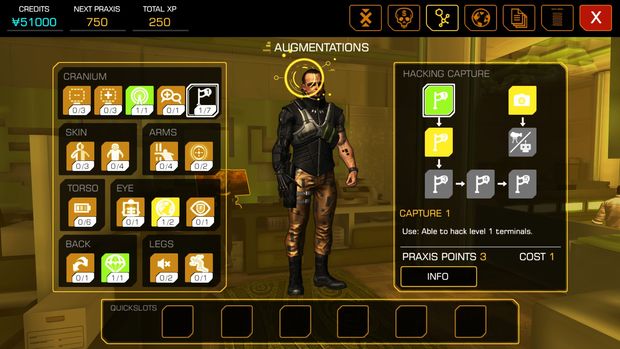 The Fall really feels like it’s capturing what we’ve come to expect out of the Deus Ex series. It looks great for being a mobile title (all things considered) and I was quite happy with the controls. The one thing that bugs me though is that you can’t pick up a body after you’ve downed someone. Bodies will disappear after a while (GoldenEye 64 style), but guards and cameras can still see a body until it of course has finally vanished.

I should note that this is the first installment of course, and the story will continue. Whether that means this is going to be episodic or a sequel will take place on a different platform remains to be seen though, as the developers were strictly focused on just talking about The Fall. Otherwise, this will be a nice treat for players on the mobile platform.

I do hope the 3DS and PlayStation Vita will one day see The Fall as well. It would be great on those platforms, but I do also understand the reason for focusing on the mobile sector for now, as it reaches a humongous new userbase.