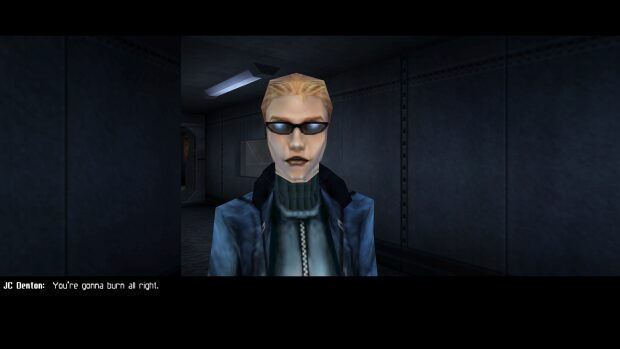 It goes well beyond swapping a model, too

Mods can keep a game alive and evolving long after it’s launched, and a new mod for Deus Ex proves just that. The “Lay D Denton Project” is a new overhaul mod for Deus Ex that, simply put, lets you pick your protagonist’s gender.

Mods that change one character into another are not uncommon, as evidenced by the many, many terrifying Lady Dimitrescu mods that cropped up around Resident Evil: Village. The Lay D Denton Project goes further, though. It restores a feature that Ion Storm had originally considered for Deus Ex, and goes to great lengths.

“While a model swap and a vocal plugin could create a cheap facsimile, we felt this would be woefully insufficient,” reads the mod’s description on ModDB. “Immersion is a core feature of the Deus Ex experience, and a half-implemented female JC Denton would sabotage that. Either we do it right or we shouldn’t bother.”

To start, all of JC Denton’s dialogue was re-voiced by actress Karen Rohan. References to Denton also had to be adjusted and altered, with certain sounds and syllabic combinations being combined to, for example, turn “Mister” into “Miss.”

Some other changes have involved changing or entirely replacing NPCs, for contexts the team thought didn’t make sense in the context of a female JC Denton. In one case, the team added Russ, a new NPC replacing Mercedes and Tessa, who usually flirt with Denton outside a club. The switch wasn’t warmly received by everyone though, and team member Chris Rohan told PC Gamer that the team is adding a flag in a future update to toggle that aspect.

The Lay D Denton Project as a whole looks supremely impressive, in both what it sets out to do and the scale of what it’s already accomplished. The mod is currently available to check out on ModDB.