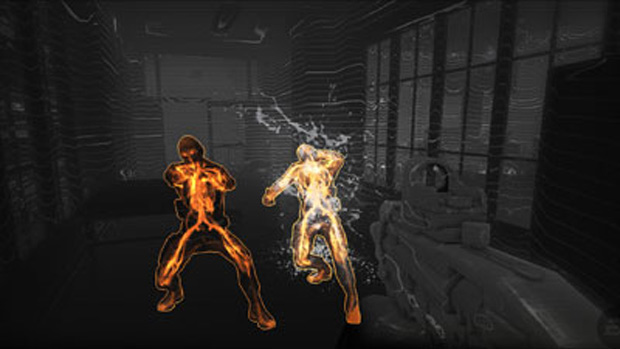 Some details on the long-rumored Syndicate reboot were put up on EA’s Origin store in the form of a product description, and naturally NeoGAF has snatched it up before it was taken down again. It’s a shooter, but we already knew that and given Starbreeze’s history (The Chronicles of Riddick: Escape from Butcher Bay, The Darkness) it’s hardly surprising.

Before you go all “XCOM is not X-COM!!” stay with me for a minute while we go through the details.

Syndicate is the re-imagination of a cult classic franchise from 1993 – a unique action shooter set in a not too distant future, where Business is War.

2069 – No longer governed by politicians, the developed world is divided up into regions controlled by megacorporations known as Syndicates. These Syndicates have revolutionized how the consumer interacts with the digital world. No longer does the consumer require a device to access the world’s data and control their technology, they can do this at the blink of an eye via neural chip implant. Civilians flocked to be “chip’d” and enjoy all that their selected Syndicate has to offer; housing, medical, banking, insurance, education, entertainment and jobs. One complete package. One complete lifestyle. In return, the Syndicates gained unprecedented insights, and control, over the individual and their behaviour. With little governmental oversight, business has become war. The Syndicates will stop at nothing for ultimate market dominance. At the front line of this war are the Agents, the Syndicate’s bio-engineered and chip-augmented enforcers. They can breach anything in the wired world including their enemies, their weapons and the environment that surrounds them, making them the most efficient and deadly technological weapons in the world.

Take on the role of Miles Kilo, Eurocorp’s latest prototype agent, and embark on a brutal action adventure of corruption and revenge.

• Chip Enhanced Gameplay: Slow down time, see through walls, and breach your enemy and everything digital in the world with Dart vision – A neural DART6 chip implant that allows you to interface directly with the Dataverse.

• 4-Player Online Co-op: Assemble your Syndicate for global domination. A 4-player, online co-op experience like no other, with chip enhanced gameplay and 9 missions re-imagined from the original Syndicate.

• Visceral FPS Experience: Utilize an upgradable arsenal of futuristic weapons, armor and gear to annihilate your enemies and harvest their chip technology for personal advancement and sinister corporate greed.

• Sci-Fi Fiction: Immerse yourself in the world of Syndicate 2069, with a world-class sci-fi story experience, written by bestselling author Richard Morgan.

Disregarding how if you replace everything with augmentations, Sarif Industries, and Adam Jensen, it sounds vaguely familiar, it’s still a bit like the original Syndicate games isn’t it?

Everyone in the Syndicate universe had neural implants that allowed you to manipulate them using a gadget called the Persuadertron. Being able to access and interface with all tech when everyone has chips inside of them in the new Syndicate opens the game up to some cool possibilities. While I’m sure there are more interesting ways to use this than adding bullet time or X-ray vision, “breach your enemy” could still be read as a hint that some Persuadertron type of mechanic might make a return.

Ignoring the marketing talk about the “Visceral FPS Experience” and how you are supposed to “Immerse yourself in the world of 2027 Syndicate 2069,” it seems that harvesting “chip technology” would be an XP system and you can upgrade weapons and gear. The latter in particular is not something you see in an FPS that often, so perhaps some light RPG elements or a persistently manageable squad will mirror the original’s R&D progression system. One can hope.

While I can’t say I’ve ever read anything Richard Morgan — the writer for Crysis 2 — has written, apparently he has a thing for cyberpunk and dystopian themes. A property like Syndicate feels like a better match for someone like Morgan than Crysis 2, a game which I doubt people will remember for its story ten years from now. Either way, he could go wild something like Syndicate, and hopefully he’ll have the freedom to explore his favorite themes and give us something as dark as the originals.

Truth be told, my first reaction to all of this was a “NOOOOOOOOOOOOOO” in the voice of a dozen movie characters. But after sleeping on it and going through it piece by piece, it actually sounds like it could be a neat game. Sure, you don’t click your squad around anymore, but everything else still has the potential for a revamped approach that takes the old game to the current era.

Starbreeze doesn’t mess around with PG-13 violence to appease the masses either — Riddick and The Darkness were unapologetically violent and dark games. Whether or not we’ll be able to Persuadertron 30 innocent civilians to pick up an arsenal of weapons, use them to shoot down police officers who are just trying to feed their families, tell them to stand outside a church or bank, and then blow up the building with suitcare nukes as glass and debris flies everywhere, we’ll have to see.

Sadly such a scenario would not be very politically correct in this day and age, even though it was fine 18 years ago. We have to think of the children who are not allowed to buy M-rated games, after all. If Starbreeze can pull off translating the dark behavior that the original games’ mechanics elicited, while trading the top-down perspective for a first-person one with 4-player online co-op, I’m willing to give it a try — even if it’s not exactly the same as the games I grew up with.