As one of the largest and most important gaming industry events of the year, E3 is also a really big deal here at Destructoid HQ. This year we sent a massive team to the event, which included several editorial staff and separate camera crews, all in an effort to bring our readers the best coverage of this big comeback for E3. The staff ranged from seasoned writers to newbies, and each brought their own flavor to our coverage. The end result was a never-ending deluge of E3 stories that brought us new readers and broke traffic records.

As things finally being to wind down after last week’s excitement, we thought it would be interesting to interview the attending staff to see how they fared at the event. They were also polled on how successful they thought E3’s big comeback was, as well how they thought E3 could be improved next year.

Hit the jump to read part one of our two-part interview with Destructoid’s editors on E3 2009.

This year E3 did its best to get back to its roots, inviting back the booth babes and the crazy spectacle that we’ve come to miss since the 2006 event. We asked some of our more experienced staff what they thought about the return of good times. Chad Concelmo said that this most recent E3 is one of the best of the six that he has attended.

“I loved this E3. It was my sixth and I would go so far as to say it is at the very least my second favorite of all time,” Chad says. “The spectacle may not have been exactly the same as the days of old, but it was definitely much grander than the last two years.”

Chad also liked that the floors were less crowded than before, something that other E3 vets echoed. Anthony Burch was on the same page: “You’ve got the relatively short lines from E3 2008, but all the spectacle and excitement from earlier E3’s.”

Did we get back to 2006 levels of excitement? Not yet, but E3 is on track for bringing the excitement back. Editor-in-Chief Nick Chester feels that E3 is set for a comeback. “The size and scope of what was happening inside the convention center certainly didn’t match what I remember from E3 2006,” Nick said. “But in terms of capturing the excitement of gaming and industry as a whole, I think it did capture that, for sure.”

This time around, we brought several first-timers to E3, and it seems that many of them were not as dazzled by the event as they originally expected to be. Ashley Davis had a good time, but the initial impression was kind of disappointing.

“After growing up thinking that E3 was this huge, magical land of wonderment, I would have to say that E3 is much smaller and less dazzling than I imagined, but I’m sure everyone walks away from their first with that feeling.”

Power writer Brad Nicholson felt the same at first, but ultimately came to appreciate the show for what it is. “Initially, I was underwhelmed,” said our most muscle-bound writer. “I had built the event up in my head, believing it to be some mammoth unmanageable thing. But as the first few hours zoomed by, I began to appreciate the event for what it was: a big party where new games are viewable and gamers (including games writers) can get enthusiastic about games again.”

Others were unabashedly enthusiastic about their first time, though. As it should be. Power punctuator Samit Sarkar was all about it: “E3 was insane, overwhelming, and awesome — all at the same time. I’m glad I was able to attend the return of ‘the old E3’; I feel like it’s a great coming-out party for the games industry, and all the glitz and glamor is great.”

Community manager Hamza Aziz calls ’em like he sees ’em, and from what he says, it seems like he had a great time.

“E3 09 felt like a giant happy time of joy,” says a shark. “People were excited to see games and you could really feel the energy from everyone. Also lots of titties and legs all over the place. Yum.” 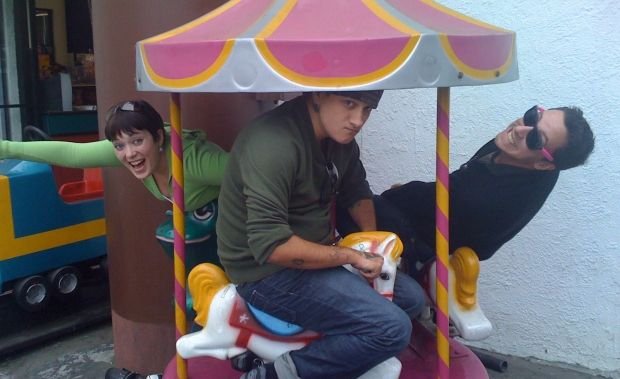 But was it really all fun and games?

E3 may look like fun from the outside, but it isn’t always. We asked some of the newer staff how much fun they really had this year. Samit had a good time, even though he didn’t get to eat between dinner on Tuesday and lunch on Thursday. He said the show was more work than he expected, but it was also more fun than he expected.

“I was running around all day from appointment to appointment, and I didn’t get much sleep or eat enough,” said Samit. “But hanging out with the Destructoid crew is always amazing, and meeting industry people was great as well.”

Ashley was also pleasantly surprised: “I was very, very nervous about attending, so it was a lot more fun than I thought it’d be. I love playing games, learning about them and writing, so it was up my alley!”

Brad thought E3 would be much harder than it was. But when asked if E3 was as much fun as he thought it would be, he said that “it totally was.”

Jim Sterling said that he had more fun than he expected, and some of that fun came from his event room mates.

“Sharing a hotel room with Hamza, Brad and Samit was a consistent source of hilarity and I had a lot of fun of the show floor as well,” Jim said. “It was amazing getting to play games like Bayonetta and trying to capture funny videos at the various booths.”

There’s a downside to all this fun, and for most of us, it was work-related stress. E3 is a fast-paced environment where lots of work is expected, and that leaves little time for eating or sleeping.

Chad’s stress was time-related, though he doesn’t label it as bad stress.

“It is a good stress, mind you, but stressful nonetheless,” Chad said. “Trying to do so much in such a short period of time is a really overwhelming experience. It’s almost like you don’t have time to sit back and enjoy it all.”

Jonathan Holmes’ stress was more about his tasks at hand, in his case, video and editing: “Being on camera is tons of fun, until you have to go back and watch it again and again and again. The editing process is both demoralizing and stressful in a way like no others.”

Samit also found the event stressful, and calls out those who didn’t think it was: “I don’t think it’s possible to cover an event like this without feeling some stress. In fact, I’d be suspicious of anyone who didn’t admit to that.”

He’d have to be suspicious of Anthony Burch, who had a more laid-back attitude about the event. When asked if E3 was stressful, he said “not really,” and continued “So long as you write relatively fast and have stable wifi, it’s all good. And even if the wifi dies, nobody’s head is going to explode because your hands-on went up a half-hour later than you felt it should have.”

Jim was pretty relaxed about the event as well, but did shake a finger at the hotel we stayed at: “Pretty much all stress I felt can be attributed directly to the Clarion Hotel. Fuck that hotel in its quivering arsehole.”

Finally, Hamza’s stress was also work-related, but he added some aspects that were more…physical.

“I did a lot more management stuff and made sure people had stuff to do, said Hamza. “I don’t know how Nick Chester pulls this off without losing his mind. Plus, the event made me forget to eat or poop most of the time, which is awesome because I’m trying to lose weight and I HATE pooping.” 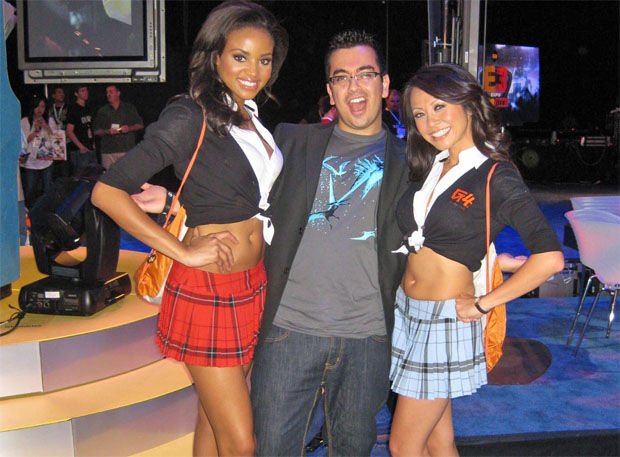 For as much fun as our staff had at E3, most of us still felt there was room for improvement with the show. Some of our editors didn’t feel like they had enough time to see everything. Poor Colette Bennett didn’t get to play any games!

“Another show day or longer hours to give us more time to cover everything,” Colette said. “I rarely get to actually play any games I want to play at the show, and I wish I could do that.”

Chad asks for about the same thing: “If anything, longer hours for the show floor and press room? An extra day for everything? More time would have helped tremendously.”

Jonathan Holmes was looking for a more diverse E3, and had some suggestions for the ESA.

“Try different forms of marketing,” Tron requested. “Get advice from HipHopGamer and GayGamer on how to market to other gaming cultures. Don’t treat gamers like we are all the same. E3 should be like a huge film festival, where tons of different types of movies, and moviegoers, get their say. “

Others had much more simple requests. Alex “Dyson” Ryan asks for improvement on the food situation: “More sandwiches. 200 sandwiches for 40,000 people won’t fucking hoof it.”

Check back tomorrow for the second part of our interview with the Destructoid staff, where we’ll talk about teamwork and lessons learned, as well as plans for next year’s E3.