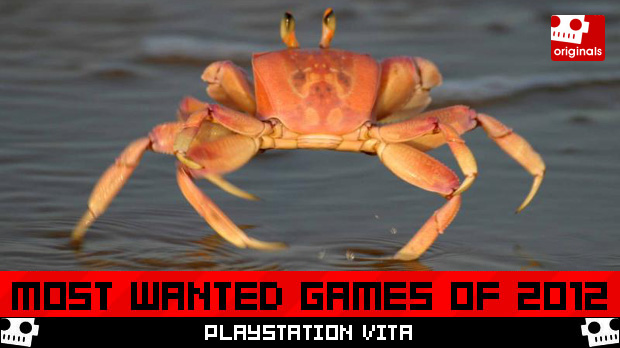 It’s a new year, and a new handheld is looming on the horizon, as Sony prepares its PlayStation Vita for a Western launch. Already out in Japan, the Vita is slow to gain traction with fans, but that doesn’t mean it’s not an exciting new prospect with an astounding launch lineup.

So, what’s looking hot on Sony’s latest attempt to shatter the portable market? A surprising amount of stuff! Why not check out what we’re hot for, and let us know what’s making you drool with anticipation?

There’s no way Destructoid’s biggest Killzone fanboy wouldn’t list Killzone, so don’t act surprised. While Killzone: Liberation was a cute enough game for the PSP, the arrival of a system with dual analog sticks means that a “real” Killzone game can finally be had on the small screen, and it’s by far one of the most exciting aspects of the PS Vita.

No firm announcements have been made on this title, in development by the solid Cambridge Studio guys (what’s left of them). Nevertheless, footage revealed in early Vita trailers makes it look pretty damn good already, and I’m very much looking forward to playing a fully-fledged FPS with authentic FPS controls on a handheld system. Not exactly the most innovative of desires, I know, but it’s still an astounding testament to how far portable gaming’s come.

This game looks like an absolute delight, and is a shoe-in first-day pickup for me. A delightfully vicious little puzzle game in which two differently sized creatures have to escape from various Saw-like traps, Escape Plan marries intricate environmental puzzling to beautiful, stylized graphics to create something very unique looking. The protagonists, Lil and Laarg, are some of the most unusual game heroes I’ve seen in a while, and the ability to play around with them using touch controls ought to make for some remarkably tangible characters.

From trailers, it seems defeat will be just as rewarding as victory, with Escape Plan carrying the old school adventure mentality that failure equals grisly, hilarious death. If they can keep up the level of inventiveness seen in the promotional material, this could be one of the surprise hits of 2012.

Oh shut up! Dynasty Warriors is the greatest game series ever developed, and anybody who says otherwise is a thieving liar! In any case, Dynasty Warriors NEXT looks to inject some fresh ideas into the franchise, utilizing as it does every single mode of input the Vita boasts. Traditional controls are married to a range of touch-screen, tilt and even camera-based interfaces, making for a game that’ll give the fingers quite a workout. There’s plenty of button mashing, but there are also boss fights that take a page from Infinity Blade, as well as minigames that require EyeToy-like interactions.

With plenty of hack n’ slash nonsense, as well as the returning create-a-warrior mode, there should be lots on offer for fans of the series, and even non-fans who want a guided tour of everything the Vita has to offer. Can’t say fairer than that!

In Army Corps of Hell you play as the king of Hell, trying to work his way back to the top of the heap after being taken down a few notches. You’ll gather what little power you have left to command a horde of minions to rip apart every monster in Hell and take over the place. Heads are literally ripped off mythical beast bosses by your little subdemons. You’ll feel like the devil as blood splatters all over the Underworld while heavy metal rages in the background. Demonic laughter comes naturally as you watch your minions rip at the leftover flesh, looting it for food and prizes.

Pikmin and Overlord fused together in the fires of Hell, set to music that makes you want to whip your hair around in a headbanging fury? Smart dual stick controls, big bosses and hilarious dialogue move this title to the top of my launch list. Where do I sign? I’ll sign in blood!

I’ve already finished Uncharted Golden Abyss and gave it high marks in our review, so it has to be on our list of most wanted Vita games. If you missed it, know that this title is just as cinematic and huge as its PS3 predecessors, with all the cliffhangers (literal) and crumbling floors you’ve come to know and love. I could tell you that I think this one is going to be good, like we have with our other recommendations, but I know it is good, as I’m on my second play-through.

What you’re getting here is a perfect translation of the series’ PS3 action, thanks to the dual analog sticks and Dual Shock 3-ish button layout. The Vita does not miss a beat. You want this. Trust me.

Gravity Rush has been on our radar from announcement. Here’s why: launch titles are supposed to be ports and rushed, re-rigged tech demos — not polished, original experiences with distinctive art and gameplay. This odd one out is at the top of my personal list of most-wanted Vita games.

Keiichiro Toyama, the guy behind early work on Silent Hill and Siren, is heading up this anime-like, cell-shaded action/adventure. Instead of playing with scares, this title toys with gravity and the Vita’s motion sensors. You’ll play as Kat, a girl that learns that she can defy gravity to walk on walls and kick baddies out of the sky. We don’t know much about the story yet, but we know that Gravity Rush is fun and really easy on the eyes.

[Good news: We recently learned that Gravity Rush will be ready for Vita’s launch.]