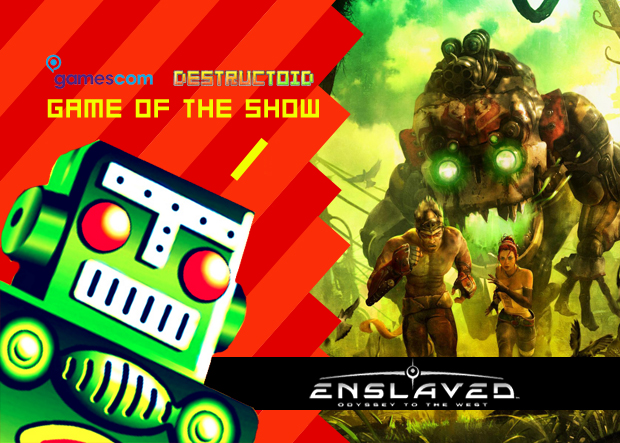 We are almost always required to provide a “Game of the Show” at the end of any major gaming exposition. gamescom 2010 is no different, and I was utterly spoiled for choice this year with big title after big title thrown in my path; not surprising, considering that gamescom is the biggest event of its type in the world. (Yes, that does mean it is bigger than E3.) Picking gamecom’s best of is definitely not an easy task, and naturally opens it up to a world of trolling and no holds barred Internet rage.

Gamescom showed us plenty of triple A titles that could easily take “Game of the Show.” We saw balls-to-the-wall action in Bulletstorm; got in-depth high fantasy role playing game Dragon Age II; Ezio and his band of assassins in Assassin’s Creed: Brotherhood; the MMO for people who don’t like MMOs known as Guild Wars 2; and the letting go of dignity and self-reservation with Microsoft Kinect and PlayStation Move, to name only a few.

One game stood above all of these to take the title of Destructoid’s “Game of the Show,” and that was Namco Bandai’s Enslaved: Odyssey to the West.

This was my first encounter with Enslaved, and I spent the entire presentation grinning like an idiot on the edge of my chair, shooting looks of child-like excitement back and forth between my camera man and my blogger. One of the most attractive elements to Enslaved is that fact that it’s something new. I have played and seen so many amazing games while at gamescom, but so many were follow-ups to already existing games. Enslaved was something refreshing.

It’s a game that delivers on so many levels. Visually it appeared stunning, with gorgeous detail. The characters moved and interacted to such a fine degree, with amazing motion-capture and voice acting to boot. (Not surprising since the writing is by none other than Alex Garland.) The combat was varied and contained everything from third-person shooting to free-running, puzzles, close-quarter combat, and even a good old chase scene. I was also pleasantly surprised to learn that the main female character, whom you are supposed to protect, is not some batshit insane bullet sponge with a death wish.

I am a little worried that the game won’t deliver play-time wise, but other members of the staff are already reciprocating the way I feel. Fingers crossed that Enslaved lives up to its hype, because I damn well want it to.

Enslaved: Odyssey to the West is due out for Xbox 360 and PlayStation 3 on October 5, 2010 for North America and October 8 for all other regions.