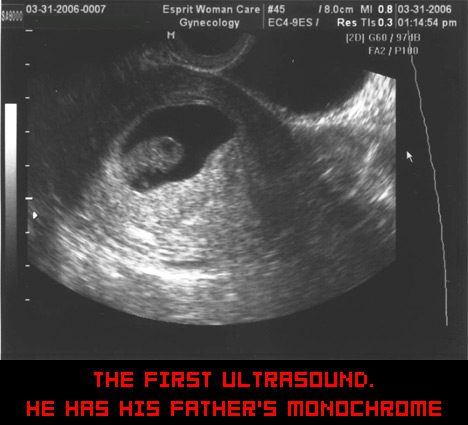 As frequent readers of my column here know, this is where I post all of the games that the editors have been playing this week, but it’s also where I give you all a tiny glimpse into my life. Today is no exception. My wife and I recently found out that she has become pregnant and we had an appointment today to get the first ultrasound of our child. It turns out that the little guy is totally healthy and fantastic and already has more hair than Summa!

As you can guess, we’re extremely excited. We’ve been trying to have a child for a year now, but it seems that some of my swimmers are a little lazy. Maybe there’s too much chlorine in the pool, or maybe they had a bit too much for lunch, but either way, it has taken quite some time for me to inseminate my beloved. Now that medical science can confirm that I have, well, it’s the happiest time of my life!

In preparation for the baby, we had to move all of our game systems out of the room we plan to use as a nursery, but you’ll be happy to know that I’m already working on a cardboard Castlevania mobile to hang over the crib. I want my child to grow up with an innate hatred of those flying medusa heads, similar to the one that has been ingrained in me over years of expeditions to murder Dracula.

My wife is asleep at the moment, but she wanted me to tell you guys that she appreciates all the support and well wishes and that she especially appreciates all of the donations to our Paypal account after the tragedy that befell our family in the wake of last year’s floods. Without your generous support, we wouldn’t have a roof over our heads, much less a roof to put over the softspot-pocked head of our coming bundle of joy. You guys are the best internet strangers a guy could hope for!

While I’ve been busy knocking up my old lady, the editors of Destructoid have been playing video games. Hit the jump to find out more.

backflip10019:
I’ve got a monster of a research paper — a 15 pager (sure, might not sound like much but I just started researching and it’s due Friday) — to do this week, so I won’t have much time to devote to my baby, the 360. Oh well, I had fun carousing with my SW33T! baby this past week. (Oh, honey I can’t wait to get back to you!) I’ll probably throw in a few games of my other baby, StarCraft (My name’s WillyMammoth, look me up).

Aaron Linde:
Good god, I’ve been playing nothing. I’m finishing Zelda tonight, and then there’s a week-long embargo during which I can’t play any games. Papers, portfolios, and finals, finals, finals. I’ve been thrown headlong into the Stygian depths of a hell that I cannot relate in any mortal tongue.

orcist:
I too am being consumed by the unholy mother of fetid corpses – exam week. 3 papers and a video from now, I’ll get back into the swing of things.

Nex:
I’ve been playing even more PSP Tekken this week and I’m getting the sinking feeling that it’s the only reason to own the system. I hope the new Metal Gear coming out on the 5th changes my mind. Other than that, I’ve been playing figure-out-how-to-legally-fill-my-new-80G-iPod, right up until the point that I decided legal music is for bitches and pirated 6000 songs.

Grim:
Small Arms has really been a blast. It has a bad story mode, but the offline multiplayer is amazing. Even the online multiplayer is good. Finding online games is surprisingly fast. It usually takes less than 10 seconds to get a 4 player free-for-all match going. In case you aren’t understanding me, get Small Arms! It is one of the few good XBLA games available.

My DS has been brought out of the shadows thanks to Elite Beat Agents. I’ll be the first to admit that I’m not much of a handheld gamer, but EBA really gives me what I want — pure fun.

Dick McVengeance:
I’m picking up Zelda and Excite Truck from time to time, but really trying to focus on school and Japanator. Stupid f*ing releases for Metal Slug and Elebits being pushed back again…I want my Metal Slug!

NickBrutal:
I recently received a truck load of Wii points, so I’m probably going to be spending a lot of time playing some classics. On second thought, I’ll probably get bored of most of the Virtual Console games in five minutes or less and move back to Twilight Princess.

I also started playing Viva Piñata and so far it’s been great. Trying to get colorful little piñata creatures to screw one another is an experience only the Xbox 360 can deliver.

Fronz:
Yeah, unfair amounts of homework and projects killed me last week but I’m finally free for a while and I’m finally getting a chance to dig into my Wii. Just started up Twilight Princess and am in love. Also went out and bought Call of Duty 3 – noticeably different than COD 2’s style of levels, but I still like it a lot so far. I also bought Condemned: Criminal Origins finally, but I probably shouldn’t have – I’m not gonna touch it for a while.

Robert Summa:
Every Wii game that is known to man. Gears of War (yeah, still, cause I loves it). Tony Hawk Project 8. Blitz (360). Bionicle (360) and all the other crap that I have to play for reviews.

CyberneticTigerZ:
Ya bitches! Finished my time attack of RE4. Four hours and thirty eight minutes. I was shooting for four hours or under, but eh, I did beat my previous time attack by an hour and a half.

Niero:
Still stuck on Zelda: Twilight Forearm of Burning Fury, debating on whether or not I will finish the game this weekend or actually update the Destructoid Forum design. Hmm. This week I also beat the crap out of Elite Beat Agents (loved it), and rediscovered some classics on the Wii Virtual Console: Bonk’s Adventure has me eating meat and biting walls, I got the Blue Sword in classic Zelda, and am stuck in Silence on Expert mode in F-Zero. My Wiitoid Wi-Fi is working now so look for me in your Wii Parade soon ladies and worms! I’ve also decided that Trauma Center on the Wiimote isn’t as fun as on the DS, there was just something cooler about tapping at the guts.

Ishaan:
Decided to give some old games a try while waiting for my Wii. I’m currently playing Jazz Jackrabbit 2 online and Heavy Gear 2. Oh, and that flash game – Papa Louie. It’s got me addicted, for some reason.

I’m going to go rub my wife’s stomach and coo softly in her direction while you guys hit the comments to tell us about what you’ve been playing.