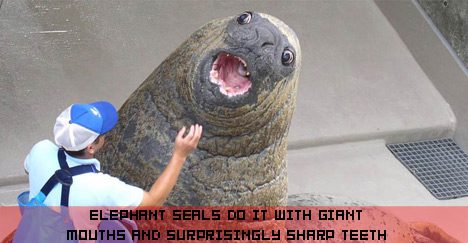 When you were a child, your parents tried time and time again to explain to you where babies come from, but you were simply too dense to comprehend it at such a young age. To that end, your mother has plied most of the staff of Destructoid with various favors (well, all of us except Sheir who was busy playing on the swings outside) in the hope that we would explain it to you in words you can understand. You are, after all, her only hope of having grandkids (your sister is a harlot and her womb is as barren as the Tomb of Dracula).

This is especially important this time of year as the leaves are falling from the trees, Old Man Winter is nipping at a bottle of hooch and a young man’s fancy is turning to loose woman and tales of the sea. Assuming you’re a spindly geek, you’d never make it as a pirate, so it’s high time you learned about the mystical world of the birds and the bees.

It seems that when a man loves a woman (or one pays the other a sufficient amount of money), they can opt to, as the French say, “do it”. If The Sims is to be believed, this usually results in tiny explosions and screams of joy (much like Summa and Gears of War), and assuming no one has an unfortunate hanger-related mishap, nine months later a stork wearing a bowtie will deliver to your front steps a little bundle of massive expenses and emotional exhaustion.

This new child is a lot like a plant. If you water it and place it on a sill where it can get plenty of sun, it will grow strong and turn a healthy shade of green before blossoming into a flower, shortly before your cat eats it.

What does this have to do with games, you may ask? One day you will learn that there is no more important game than the game of Life! Without a firm grasp on the basics, you’ll find yourself continually reloading from the last save point until you trade it in for store credit towards a used copy of Me and My Katamari that you’re only playing because everyone told you how damn awesome it is and you have no ability to determine your own tastes. Once again MTV has totally stripped you of the ability to be a functioning human being, and the ruined wasteland you call your life is all you have to show for it.

If your mother hadn’t disowned you years ago, she’d be crying her eyes out.

While I’m busy trying to guide you poor wastrels through the rigors of humanity, the other editors were playing “video games”. Here’s how they’ve been occupying their days this week;

Ron “Rich Kyanka” Workman:
Dtoid and Retoid have been my most played by far. Aside from that I have been going crazy with the new Xbox LIVE stuff. Downloading movies, TV shows and Demo’s has been really fun. The Superman demo is almost as fun as getting a STD. Small Arms, Contra, Defender, Centipede… I mean, not Centipede and Rainbow Six.

Robert Summa:
Besides waiting to download V for Vendetta for a few days, I’m playing everything under Nex’s momma’s ass. Still rocking Gears, playing Tony Hawk, CoD 3 (360 version, not gimped Wii version), trying to stay awake while playing boring-ass Zelda, Madden Wii, Guitar Hero 2, Singstar (yeah muthafuckas, I know how to rock the mic!), and for the handhelds I got a ton of PSP games to get through: Rush, MK, and Dungeon Siege (which sux loading balls).

Gregor:
Essentially, it’s been all about the Wii this week. I’m 24 hours into Twilight Princess, and that’s been consuming most of the time. When I’m not playing Twilight Princess, I’m making celebrity and Brian Crecente Miis. As soon as I finish Zelda, I’m going to be getting either Rayman or Trauma Center, haven’t decided yet.

Nex:
Due to my insane love for all things Tekken, I went out and picked up a PSP this week. As much as people (including myself) bitch about it, the Tekken that came out for it a while back is as good if not better than the PS2’s Tekken 5 and I’m totally loving it. I just wish it had real online play.

RevAnthony:
I’m juggling my time between trying to get a new controller so I can play my sister at Wii Sports, playing Red Steel, and resisting the urge to sell my copy of Twilight Princess for something more fun, like Rayman. Or a swift kick to the balls.

Faith Naked:
I’m still playing Viva Pinata and even sent Summa another pinata to hump. I’m also playing Call of Duty 2 online with my friends and recently picked up Final Fantasy XII which is a SW33T! game.

I would be downloading Xbox LIVE movies, but we don’t have them in Canada.

Niero:
I’m in Wii heaven: Zelda: Twilight Princess, Trauma Center, Call of Duty 3, and if anyone is within a few feet of me I break out the Wii Sports. I’m getting pretty damn ruthless in Golf! I’m also taking a bit of a break from gaming this weekend to play with the site design. Hope you like the new look! I have a lot more up my sleeve but sleep keeps interrupting.

Nick Brutal:
A buddy of mine lent me Phoenix Wright and I’m out of town for the weekend, so I decided to bring it with me (despite the fact that I still haven’t finished Yoshi’s Island DS and should be focusing on that). I can see why people would enjoy this game, but the “best game EVAR” air that surrounds it baffles me a bit. It’s entertaining and I’ve already decided that next year I will be Phoenix Wright for Halloween, but I’m not scrambling to import the new one.

That’s really about it for now…Twilight Princess is getting my full attention this week, as I want to get through as much of the game as possible for Summa’s proposed multi-writer review. Anyone else aiming for that, too?

Also, I will still kick a puppy if it gets in the way of me and Guitar Hero II.

Sheir:
Playing Twilight Princess when I can. My entire family has been playing the Wii constantly, and whenever I break out Zelda they bother me to set up Wii Bowling.

Kayka:
No Wii systems in europe, so I have to play my old stuff. Still playing Ico on the PlayStation 2 and it rocks my socks. I stopped playing Splinter Cell: Double Agent for a game called Dark Messiah Might & Magic. I hope it runs fine.

What have you guys been playing this weekend? Hit the comments to let us know! (Note: “With myself” has been done to death.)