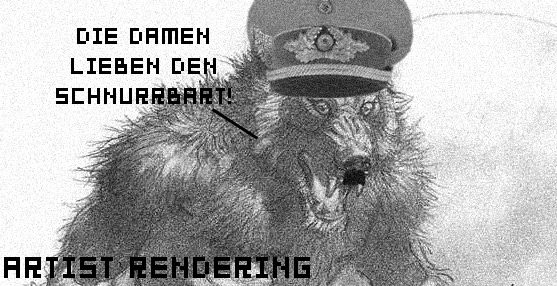 There are those who would tell you that the Holocaust didn’t happen, and that’s just wrong. Millions of innocent people were turned into howling beasts only out for flesh (and occasionally for lovin’) in Hitler’s mad scheme for world domination.

This Thanksgiving, we should all give thanks to the men of the United States military, who, armed with silver bullets and patriotic uniforms, fought back the lupine menace and made the world safe for humanity (and sometimes vampires).

While they could never actually save the world from an invasion of Nazi lycanthropes (weak arms, poor constitution), the editors of Destructoid have been spending this last week making the world safe from digital threats (that probably weren’t much of a threat to anyone anyway).

Read on to hear their harrowing tales, while I head down to the VA. I’ve got a fierce burnin’ in my nethers.

DickMcVengeance:
I’ve got a Wii in hand with Zelda and Excite Truck. They didn’t have Metal Slug Anthology or Elebits available at launch, which sorely disappointed me, since they’re both awesome. I tried Red Steel before buying it, but it wasn’t able to convince me just yet to buy the game. So, we’ll see.

Aaron Linde:
I’m in a dead sprint to finish Final Fantasy XII by Saturday night, so I can jump headfirst into Twilight Princess. In the mean time, bus trips and pre-class periods of idle time shall be filled with Yoshi’s Island DS and Final Fantasy III. I’ve all but abandoned Valkyrie Profile 2 because, well– there just ain’t enough damn time.

backflip10019:
I’m still working my ass off. Yeah, being an undergrad hella blows, but I guess it’s good for the long run. But after class lets out on Monday, I’ll be heading home with Gears of War (!!!) in my hands. I’m ready to blow all of Thanksgiving break not with my family, but with my 360. Oh, I almost forgot: I’ll let my girlfriend watch me play.

orcist:
For the rest of this week, I’ll be finishing up Final Fantasy 1 and Legend of Dragoon – simultaneously feeding my recent retro cravings and lamenting the fact that I’m so last-last-gen. Thanksgiving break will be a frenzy of other old RPGs, notably FFVIII and Xenosaga.

Nex:
This last week I picked up Meteos and Final Fantasy III (which, I must say, all the reviewers out there are being a bunch of damn pussies for saying it’s too hard) for my DS and I finally got Dead or Alive 4 for my 360. I’ve been meaning to play DoA, but right after buying it, I kinda almost died. The ensuing madness brought you the adventures of Werewolf Hitler, though, so it wasn’t all bad.

Ishaan:
Not gettin’ my Wii till January, so no games for me till then. Work, work, work and more work.

Fronz:
Waiting for my paycheck to come in so I can go game crazy, but I’m getting close to graduation so things are getting rough. Just some brief Halo 2, Guitar Hero II, and Gears of War time this week for me. I actually played the original Mario NES game too a few times this week. Oh yah, and that damn Ys typing game Niero found!

Grim:
I’m still tinkering with Gears of War. The multiplayer is just too damn fun — I don’t see me getting bored with it any time soon. Another game that has gotten into my rotation is Ghosts ‘N Goblins. It’s one of those old school classics that is freaking hard yet strangely gratifying.

Kayka:
I’m still playing Splinter Cell: Double Agent. Recently I’ve bought a Playstation 2 and now I’m playing games like ICO and Canis Canim Edit (aka Bully — Nex’s note) on it. I think it was the right decision, as I’m not going to buy a PS3 until Heavy Rain comes out.

Robert Summa:
I’m a busy fucking monkey — no, not fucking busy fucking a monkey. I’m playing all my Wii games, Gears of War on insane, Call of Duty 3 on the 360, trying to figure out Viva Pinata, Tony Hawk Project 8, Dungeon Siege on the PSP, and a bunch of other crap not worth mentioning here.

Sheir:
Twilight Princess + Wii Sports. I threw out my arm already, by playing like they do on the commercials.. My dad’s been hogging the Wii Sports, though. I asked him what he thought of it, to which he replied “Shut up, I need this spare.”

Gonna play some Monkey Ball tomorrow and get in some more Twilight Princess. Maybe I’ll play Ristar sometime in between.

CyberneticTigerZ:
Until I can get my hands on a Wii, I’m replaying Resident Evil 4 on the GameCube again. This is going to be the 10th time I’m replaying it. The game is so linear yet I can still keep playing it. I’m going for a speed record. My fastest time the last time I went for a speed record in the game was 6 hours. I’m shooting for 4 hours at max this time around.

Niero:
I spontaneously camped out for a Wii in the middle of reporting from the front lines, having found an abandoned store with a generous supply. I’m all about Wii Sports, Zelda: Twilight Princess, Call of Duy 3, and Trauma Center: Second Opinion right now!

So what have you guys been playing this week? Did you camp out for a Wii or PS3, or do you have jobs and people who care about you? Do you actually think Hitler was a werewolf? Hit the comments to leave your thoughts.

Editor’s Note: I realize this update seems a little late, but you should keep in mind that no one likes you, and you were probably adopted. –Nex