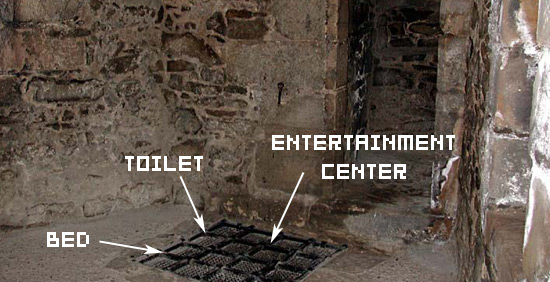 To whom it may concern,

While I realize you probably have more important tasks to attend to, would it be possible to trouble you for a piece of bread or a cup of water? I’m quite pleased you’ve offered me this position in your dungeon, but without nutrients, I fear I might not be able to perform the tasks I have been hired for to the high standards set by your corporation. As my resumé states, I’m merely an intern and while adding ambience and that much-needed waifish, half-dead prisoner feel to your underground torture arena has been a goal of mine for years, I’ve been forced to eat my hands in the hopes that the rats might think me too crazy to feed upon.

I hope to hear from you soon. Thank you for your time!

(PS: Also, could I procure some Neosporin? Apparently autocannibalism has a high risk for infection. Thanks!)

According to Japanese sales charts, Halo 3 has fallen off like a dead hooker on the side of a mountain. Is that stark reality mirrored by our stalwart heroes? Read on to find out!

BlindsideDork:
Just opened my Box de Orange and I am loving Half-Life 2. Can’t wait to dive into some TF2 this weekend. Halo who?

Topher Cantler:
I’m having one of those fun weeks where there’s nothing new out and I’m not committed to one game, so I’ve been slutting it up with whatever catches my eye. Namely, Chu Chu Rocket, Tetris DS, Robotron, Blazing Lasers (Lazing Blasers) and the now daily Ikaruga session. Also Dolphin Island, which Chad will be happy to know is not all that bad.

Jim Sterling:
My Internet has been out for the past week, meaning my online gaming has been snatched away from me cruelly. It forced me … ack … to try and play Enchanted Arms again. Lord, I wish I was dead.

Faith:
Let’s see … I’ve been playing Puzzle Quest, Cloning Clyde, Carcassonne, Blue Dragon and The Simpsons Demo all on the Xbox 360. I’ve also been playing Brain Age for the DS and Final Fantasy Tactics for the PSP.

Savant:
While everyone and their mom is playing Halo 3 and The Orange Box, I am diving head-first into the wonderful world of Puzzle Quest on Xbox Live Arcade. I loved the game for the DS, but it was always so rough on my eyes to squint constantly, thinking “Is that a yellow gem or a green one?”

Now that I’ve got it on a much larger screen, all is right with the world. Now all I need is for Guitar Hero III to come the hell out so I can fail Through the Fire and Flames for hours on end…

Nick Chester:
Played quite a bit of Unreal Tournament 3 on the PC; first 20 minutes of Phantom Hourglass; picked up The Orange Box (360) and have only touched Portal so far; and I play Jam Sessions while on the toilet.

Dale North:
Aaargh! I’ve got Japanese SRPGs on my 6! Final Fantasy Tactics (PSP) pops out when I’m not even done with Jeanne D’Arc yet? Actually, there’s a pretty good reason why I’m not done with Jeanne D’Arc — I’m dying in some battles several times over. In one battle, I died nine times over the course of 3 days! I actually had to get out and grind to finally take that one over.In the mean time, I’m destroying locals in Super Puzzle Fighter Turbo II HD to bring my confidence level back up.

Nex:
I’ve got a list! Halo 3 (probably for the last time thanks to …), The Orange Box, Unreal Tournament 3, skate, Everyday Shooter, Forza 2, Puzzle Fighter, Street Fighter III: Third Strike, Marvel: Ultimate Alliance, Wordjong, and bizarrely Blue Dragon. I still don’t think it’s phenomenal, and it’s hopelessly derivative of the Final Fantasy series, but it lacks the pretension and baggage Final Fantasy now drags with it wherever it goes, so I can spend a few hours in the early mornings relaxing by running around inside its gorgeous, ultra-Japanese world.

Also, that JRock battle music is frickin’ sweet! There’s nothing like shredding guitars to get you in the mood to murder fecophiliac hermit crabs.

Chad Concelmo:
I love The Legend of Zelda: Phantom Hourglass. That is all.

Tristero:
Man, I thought everyone exaggerated just slightly about how wonderful BioShock was. That is, until I started playing it myself. It was worth all the hundreds of dollars I spent on that 360 just to experience this game. What the hell have I been doing with myself over the last month that was more important than this? Has anyone ever noticed how playing an amazing game makes you have a good day no matter what else happens?

Ron Workman:
I want Orange Box damnit! Halo, Halo, Halo for breakfast, Halo for Lunch, and I finally caught up on seriously around 8 or more XBLA games that I haven’t been able to play. As stupid as this sounds, I like Track and Field. Rainbow 6 Vegas, Bioshock … O.K. I admit, when I saw this game a year ago, I was not impressed. They made it clap. It is visually amazing. Tron Knots has naked pictures of me and needs treefiddy to release them. I also got to play Dead Rising for the first time ever. It looks great in HD. Ohh… and did I mention Halo?

Gameboi:
Haven’t picked up the Orangutan Box yet, so it’s still the Halo thing for me.  Just maybe, there’s a shiny new PS3 in my immediate future. I need some sort of backup when “old reliable” shits on me. We all know it’s just a matter of time. Hell, I’ve been through 3 of them already.

Grim:
This week has been nothing but Portal, Team Fortress 2, and Halo 3. Okay fine, I did try Yaris, but after unlocking one achievement, I couldn’t take the piece of garbage anymore and was forced to quit playing. A dude on NeoGAF said it best: “Yaris may be the most deleted game ever.”

Dyson:
Aside from playing some Super Smash Bros Brawl at the Nintendo event the other day, I’ve been completely absorbed by Phantom Hourglass. I wish I could say that I’ve spent more time with some other games, but PH has still kept me hooked all week and I’m more than okay with that.

Dick McVengeance:
I’ve been playing a ton of Soul Nomad and the World Eaters. As it goes on, the battles become more grindy, which is disappointing, but at least things move along fairly quickly. I’m still loving the game overall, though. Now that I’ve got a PSP Lite, I’m also playing some Loco Roco and Star Wars Battlefront: Renegade Squadron.

Colette Bennett:
Still immersed in Phantom Hourglass, but also PUZZLE QUEST. This game must be made up of liquid crack and the ground bones of newborns, because it can literally suck me in for hours. Now that I have cashflow again, I’m going to track down Persona 3 tomorrow. Better late than never!

What about you kids? Still making out with Master Chief behind the wood shed or have you developed a thing for crowbars and realistic physics? Go! Comments! Now! MACH SCHNELL!