Back when we finished the Extra Life marathon last year, we swore that if we ever organized another charity marathon, it would be too soon. Well, after completing this year’s gaming marathon we sort of feel the same way. But having the support of all you wonderful community members and knowing that we’ve done a lot to help children in need makes it all worthwhile.

History time! In 2008, Destructoid got involved with Extra Life as Jim Sterling performed a singing marathon and raised an amazing $3,000 for charity. In 2009, Niero and staff based in Miami ran a 24-hour gaming marathon and raised a grand total of $4835.60. And last year, our marathon based out of Dtoid HQ in San Francisco raised $6000 for children’s hospitals.

Well, I’m happy to say that this year, we surpassed all previous totals and raised of $6909.16 to benefit Children’s Miracle Network hospitals. This huge amount of money will go towards research, medical care, and education that will benefit the lives of sick kids. And now it’s time to give the appropriate thanks. 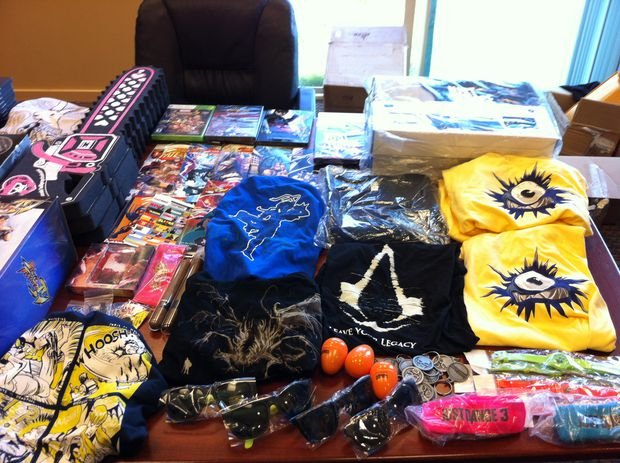 This event was possible because of the many individuals and companies that decided to give up their time, energy, and donations to make this happen. Various game companies such as Sega, Capcom, Ubisoft, Square, 2K, THQ, Riot games, Activision, and ASTRO Gaming were more than generous and donated an AMAZING $10,000 WORTH OF PRIZES. Super special thanks go out to our friends Jake, Robin, and James from Topware Interactive for showing amazing hospitality by letting us take over their offices, providing us with food and booze, and hanging out with us.

The next round of thanks goes to the individuals that made this happen. Jon Carnage was a beast behind the scenes making sure that the audio and video was of the highest quality (much better than last year’s!). Stephen Hansen, Marc Paris, Eric Hall, and Chris Healy worked hard during the stream to keep a list of donors and keep track of all the prizes that were won during the event. Our lovely Twitch.TV channel mods Frogboss, Bill Zoeker, Gigabyte_Bandito, and the rest did an amazing job watching the stream, making sure the donation links were constantly flooding the chat.

Next, special thanks goes out our friends at Twitch.TV By featuring our stream on their front page, our stream had amazing numbers. Throughout the whole event, we had at least one million views, which is awesome! The amount of people tuning in definitely helped bring us to surpass our goal this year.

Special thanks also goes out to the community members who organized their own Extra Life campaign during the G3 event. Manasteel88, HKKstudio, Swishee, and Rifter01 together raised $525.00 which helped bring the amount of money raised by Destructoid during this Extra Life season over the top. So major props to you guys!

Last, but most importantly, I’d like to thank each and everyone of you that watched and donated to the cause. You guys never cease to amaze me with your kindness, compassion and generosity. From donating money, to keeping us going in the chat, none of this would have been possible without you all. We were so ecstatic to see that we reached a few thousand dollars so quickly into the stream, and that’s all thanks to you.

From watching Tara Long play Pokemon Snap, to watching Hamza and Niero having a dance fight with scissors and swords, and Max getting pretty drunk, we had a great time during the stream, and hope you had a great time watching. I hope to be compiling a couple of videos of highlights for those of you that might have missed some epic stuff.

So to everyone listed above and the people that I’ve forgotten to mention….

Minutes after we finished cleaning up, Hamza, Niero, myself and several others started brainstorming on how we could make next year even bigger and better. So you can be assured that next year will not be one to miss and will continue raising even more money for charity. But until then, it’s time to return to our regularly scheduled programming.