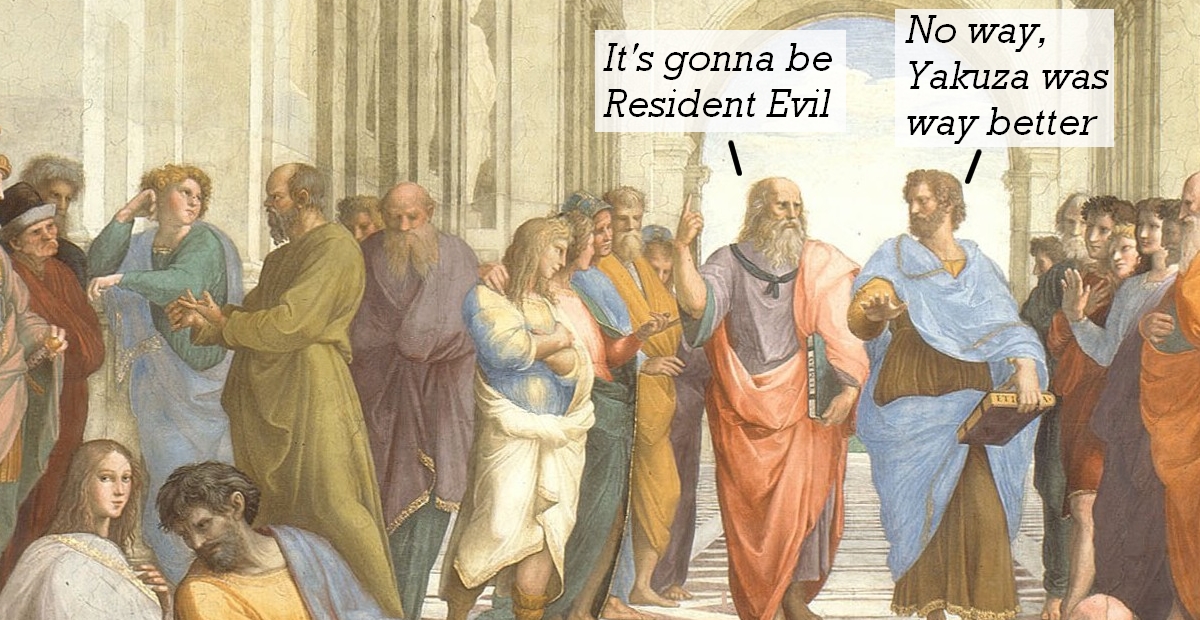 Crazy. There’s no better word to describe 2017. It was a crazy year. Good crazy in some places, like video games, and bad crazy in others.

Over the past few weeks, the community has been hard at work voting for their favorite games released in this wild, wild year… Also, hard at work reminding me that Doki Doki Literature Club should have been an option. Sometimes, people chose to vote multiple times for the same game, which made tallying pretty tricky. You know who you are. But now, the results are finally in.

I guess that makes these rankings extra valid!

Horizon: Zero Dawn is gorgeous, it’s huge and it has robot dinosaurs. I haven’t played it yet, but I can get behind at least two of these things! The PS4 exclusive made quite a splash when it launched in February, and its popularity among the community here shows it wasn’t just a flash in the pan.

Guerrilla Games’ previous title, Killzone: Shadow Fall, didn’t quite stick the landing when it launched alongside the PS4 in 2013. It’s nice, seeing a return to form for the team!

Super Mario Odyssey needs no introduction. The first collectathon platformer in the series since Super Mario Sunshine on the GameCube, the game included elements of other masterpieces like Banjo-Kazooie and Crash: Mind over Mutant to great effect.

For me, the most interesting thing about Super Mario Odyssey will be its legacy in the long run. It’s certainly found a home within speed-running communities, and I’m also curious to see which ideas will carry on in future entries.

In any case, Super Mario Odyssey is arguably the Switch’s biggest game of the year. It was by far the most popular exclusive on the system. But beyond that, it was an expansive, creative game that was a joy to play, especially after reaching post-game content. It’s no wonder that it ended up in the community’s top 5.

We’ve finally moved away from Atlus’ endless stream of Persona 3 and Persona 4 spin-offs. We haven’t quite reached the deluge of Persona 5 spin-offs yet. No, 2017 is this very special year where a new entry is unleashed upon the world, a fresh start for everyone. Fresh-ish, since there were already tons of spoiler before release date around the internet. The game’s original release in Japan was last year after all.

Persona 5 went above and beyond when revamping the daily simulator formula introduced by Persona 3. Everything, from hanging out with your friends to defeating demons in a parallel world, looks and flows better than ever before.

Personally, what I enjoyed most out of Persona 5‘s improvements is the return of proper level design in its dungeons, something that wasn’t seen in the series since Persona 2: Eternal Punishment.

NieR: Automata‘s popularity, especially on this website, keeps surprising me. In a good way, of course! Drakengard and the original NieR were far from mainstream successes, and even the game’s announcement trailer during E3 2015 was suitably low-key and relaxing.

It surpassed all estimations. With currently roughly 700k owners on Steam, and over 2 million copies in total as of September. Who could have expected a sequel to a game barely anybody played to become such a hit?

But something along the way did make NieR: Automata a success despite all odds. Maybe it was getting Platinum Games on board, giving the game a lot more mechanical polish. Maybe it was the reviews, which were much kinder to the game than other Yoko Taro experiments. Maybe it was that the internet couldn’t shut the hell up about 2B’s butt.

In any case, I’m glad it succeeded. And so is the Destructoid community, judging by the game’s second position in the poll.

Look, I wasn’t a fan of Breath of the Wild. But I’d be lying if I said any other game felt like the biggest release of the year. It sold like crazy. People talked about it like crazy. It even got a 10/10 on the biggest and greatest video game website of all, Destructoid. Wait, it got two.

Breath of the Wild wasn’t just a game, it was a phenomenon. No matter if someone hates or loves the game, you’ve already read their reasoning a billion times by now. There’s no point in even getting into it. Even though the game had a Wii U version, it was the reason why most of my friends wanted a Nintendo Switch.

Don’t lie, you saw this coming.

Ehhh, these community awards could have used a few more surprises, I hear you say. They’re basically identical to the staff picks. You’re not wrong! But I have some nifty trivia to show to you, who made it this far.

The game ended in 23rd place in the community vote, the worst position of all our PC GOTY nominees. Divinity: Original Sin II would have won the category instead, were the proletariat really in power. The RPG ended up in the seventh position overall.

The latter ended up with significantly more votes. It was the 28th most popular game in the poll, while Troll and I had to go home with a measly 35th place. Now, the age-old question finally comes to a close.

It helps that Knack II can actually be enjoyed somewhat unironically.

That’s not the best system for a community vote like this… It’s much easier for games with few votes to end up at the top. But still, to satisfy your curiosity, the rankings would end up like this:

Wonder Boy got all the way up there! Look at it go. Incidentally, it was also the least voted game in the entire poll.

Well, that’s it for this year’s edition of the Community Choice Award! Let’s hope 2018 is another great year for video games.