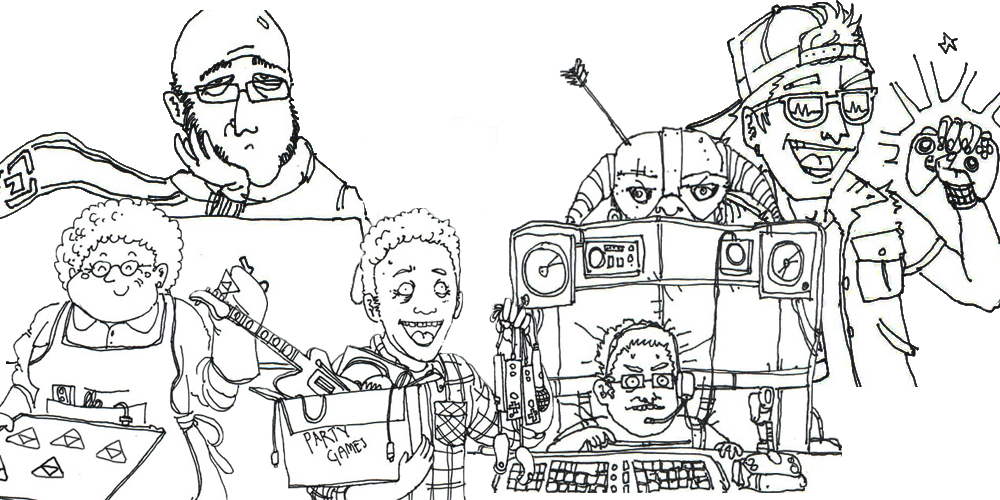 Let’s pretend that we all have friends and family, for a moment. And, let’s pretend we have the funds and consideration to buy them holiday gifts — I’m losing page views by the second with this far-fetched imaginary realm of my creation, aren’t I?

Buying gifts for people is hard because people can be very strange. Take my brother: He loves Mass Effect 2, hates Mass Effect 3, and is lukewarm on XCOM. I’ve tried kicking him but it doesn’t make gift giving any easier. Rather than organize Destructoid’s guide by price and console, I’ve done considerable research (as in, making stuff up) and broke down every human being in existence into six categories.

Place your person of interest into one of the categories below and pick-up one of our recommended games. Nobody likes being labeled so maybe keep the process between you and me?

The Philosopher likes to sip tea, become immersed in an original, fascinating game world, and then blog about it while weeping over a thesaurus. Please don’t poke, the philosopher is already crippled by the crushing beauty of the latest meaningful piece of art.

There are few games as profound, visually arresting, and calming as Journey. For anyone open to taking a little journey that requires no button-mashing and platforming trickery, thatgamecompany’s latest, most ambitious project will capture the philosopher’s imagination and leave them with a fond experience to look back on.

Not many games are built upon a foundation of research, creating a mythology, and spending years expanding their fiction. There are a lot of great things that can be said of Dishonored’s mechanics, but it’s the incredibly original, rich world that makes this so special. Not many games as daring as Dishonored get a budget so big and a development period so long, but it shows in every inch of the game’s world.

This is the perfect game for that friend who can’t stand violence in videogames. Yes, it is incredibly violent — sickening, even. But Hotline Miami’s bizarre plot forces the player to enter a downward spiral, leading the player to eventually face their violent actions. The message isn’t impactful but the delivery is. The philosopher will have much chin stroking to do after.

The Explorer craves freedom from their dull life. Their virtual life is one of discovery, adventure, and jackassery. They love to horse around and break a game, disregarding the rules and getting lost in its polygons.

If you’re anything like me, you’re pining for more than a few Metroidvania games in this day and age. Dust: An Elysian Tale provides a completely unique sense of charm with wonderful hand-drawn art and a solid combat system. For $15, you really can’t go wrong exploring the vibrant, sprawling world of Falana.

Difficult games are hard to come by. Gone are the days where we consistently smash controllers and pull our hair out, in favor of hours-long hand-holding tutorials and frequent checkpoints. Spelunky throws all of this out the window with permadeath and a crushing level of difficulty, all on top of the veneer of a wonderful art style and gameplay with depth. If you know someone who is longing for games to be hard again, Spelunky is a safe bet.

For that friend who can’t wait for the next Grand Theft Auto, Sleeping Dogs will keep them happy for some time. Sleeping Dogs doesn’t invite demonstrations of urban chaos as much as GTA or Saints Row, but the robust set of features, rollicking story, and fantastic presentation will likely hold any action junkie’s attention. Also for: Cock fighting enthusiasts.

The Tactician loves to learn and show others how their mighty brain will conquer all, unearthing new strategies by the millisecond. Don’t ever make eye contact or comment on their hygiene during the process of gift giving.

It’s not often a sidescolling platformer manages to innovate in this decade, but I can’t recall another game like Mark of the Ninja. While it allows players to act brashly, the meat of the game is in observing an area, forming a plan, and quickly acting on it. When everything aligns perfectly, you’ll feel like a ninja that puts his wits before his sword.

The original X-COM was something special, but it’s a rough game to return to, dated in many more ways than the tactician would like to admit. This XCOM reboot from Firaxis injects the original’s classic take on squad-based tactical combat with cinematic presentation, unbelievably good console controls, and intuitive design. The Tactician will thank you, curse you after losing their squad, and then thank you again when they replay the game on Impossible.

Once the tactician stops bashing the Wii and Nintendo, he or she will eventually pop your gifted Last Story into their system and experience the joy that only a great Japanese RPG can give — a joy all too rare in this generation. While it’s true that The Last Story has as much in common with Gears of War as Final Fantasy, the high adventure, leveling, and character progression will keep RPG-lovin’ folk happy. Just be sure to tell them to use a Classic Controller and set the game to ‘Manual’.

The Socialite doesn’t have time for games. They would never be caught playing one, except they are constantly playing one and just don’t want to admit it. “It’s a puzzle” or “it’s a what I do while preparing for work, for like four or five hours,” they often tell others.

If there’s a bookworm in your life, you might be thinking about gifting that special someone the latest John Grisham thriller or J. K. Rowling’s What the Hell? There Are No Wizards in This! or whatever. Fuck that noise! Pick up Virtue’s Last Reward, the sequel to the cult hit Nine Hours, Nine Persons, Nine Doors. A combination of choose-your-own-adventure, visual novel, and escape-the-room puzzler, VLR will put your critical thinking skills to the test while hurtling you along a tense sci-fi mystery escapade with more twists than a bag of Cheetos.

The Kirby series is one of Nintendo’s most notable franchises, easy enough for entry-level gamers but with just enough challenge to satisfy seasoned vets. Kirby’s Dream Collection compiles six of the pink puffballs mainline outings into one tremendous package filled to the brim with extras, like episodes of the Kirby anime, a soundtrack CD, and a challenge mode based on Kirby’s Return to Dream Land. It’s Nintendo’s best game collection to date, easily eclipsing Mario’s 25th Anniversary Collection. It would make a great companion purchase should you plan on picking up a discounted Wii this holiday season.

I’m always surprised by how AMC’s Walking Dead mini-series manages to crossover to audience that don’t usually pay attention to horror. The human drama that drives Telltale’s adventure series is the very same of the show, albeit the plot, characters, and surrounding circumstances are entirely different. The Walking Dead is one of the most accessible adventure games ever made, demanding very little of players. It may drive old-school adventure fans nuts, but it’s the perfect gift for that family member that is easily scared from games and yet likes a good spooky poop.

The Entertainer loves to throw a party and have the newest gadgets and latest toys. When they aren’t the center of attention, the duty is passed on to their media system. They can be pretty annoying but we’re okay with that. We think.

If you know someone who’s either a fan of Rock Band or Amplitude, Rock Band Blitz is your huckleberry. There’s plenty of replay value, as you’ll hack away over and over to best the score of your friends, and the global online leaderboard. Blitz isn’t your typical Rock Band experience, but even if they don’t enjoy the core package, they’ll still net themselves a 25-song track pack, fully compatible with Rock Band 3 — not too shabby!

Repeatedly shooting dudes in the face will and will always be better with friends. Though traversing Borderlands 2‘s large world can be monotonous at times, these moments give players the opportunity to chat, goof, and show off newly acquired gear with friends. I played Borderlands 2 by myself and had a great time, but that doesn’t mean the entertainer should as well.

Though it is very likely that any Kinect-owning entertainer owns Dance Central, they may not have the latest and greatest iteration in the series. Dance Central 3 ups the ante with better graphics, modes, story, and “Gangnam Style” DLC. Just make sure this isn’t your roommate or neighbor you are buying it for, otherwise you may regret your purchase as they pound the floor until the early morning.

The Thrillseeker likes to drive fast, shoot first and ask questions later (or never), and turn a game on mute in favor of their own adrenaline-pumping soundtrack. The bastards of ’90s arcade culture, the thrillseeker doesn’t get along with others but finds them a necessity in the art of bragging.

Depending on whether your thrillseeker is a single-player of multiplayer-focused guy, you may want to consider Need for Speed Most Wanted (which does online great!). Forza Horizon is a much safer bet since it’s an all-around better game, online and offline. The slick presentation, accessible driving, and massive world bring Forza to a larger audience with stunning results.

It can be tricky finding out who has the latest Call of Duty and who doesn’t. A good strategy is to invite your thrillseeker to an online match. If they say no and ask if the game is any good, LIE to them. This way you know they haven’t and won’t pick it up for themselves. In truth, Black Ops II is Treyarch’s best game yet and stands up with Infinity Ward’s best entries. Zombies, single-player, and multiplayer have gone under some smart revamps without losing the elements that made the series a record-breaking hit.

Though some shoot-em-up fans moaned and groaned at Akai Katana receiving a retail release, instead of downloadable, they all shut up when they purchased the game and basked in its glory. Developer Cave has a long history of making excellent shooters and Akai Katana stands up with the all-time greats. You can find the game for dirt cheap now, making it an excellent gift for those who are low on funds.

[Special thanks to Max Scoville for the illustrations, and Tony Ponce and Chris Carter for contributions.]