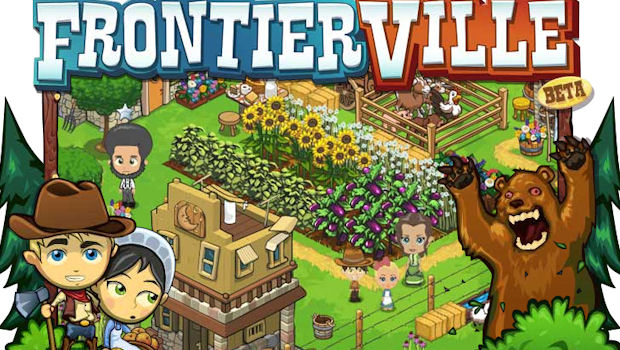 The fine editors of Destructoid are hard-hitting journalists dedicating to giving you, the hardcore gamer, all the facts fit to flaunt. This is why, for the past several days, we have been clobbering snakes, scaring bears, and feeding chickens in the name of science and JOURNALISM. That’s right, folks … Destructoid has been playing FrontierVille.

We’ve bravely stepped into treacherous waters to bring you coverage of this mysterious and deadly game that has already claimed the lives of many good Americans. We all returned marked by what we had seen or done. Dale North has started drinking. Nick Chester has forgotten how to play Rock Band. Conrad Zimmerman has become so obsessed with in-game economics that he tried to pay his rent with Gil and got evicted.

FrontierVille ruins lives. Read on to see how we tried to cope with the insanity.

On Thursday evening, Nick Chester, Dale North and myself set foot on the wild plains of FrontierVille. The plan was simple: Get into the game, become each other’s neighbors, and then start doing as much obnoxious crap as possible in an attempt to break the game and have funny posts on Destructoid. However, the plan failed — we did not break FrontierVille because FrontierVille broke us.

It all started when Nick Chester sent us all neighbor invites. We all sent each other requests and excitedly started making our homesteads all nice. Nick Chester was the first to discover that FrontierVille is packed full of sexual innuendo if you’ve got enough of a filthy mind. 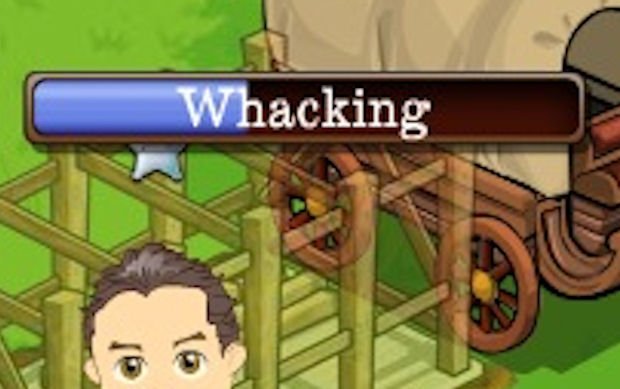 “All I know is I’ve been doing a whole lot of whacking and I’m not sure how I feel about it,” mused the editor-in-chief.

In order to build things you need to whack it. Makes no sense, but what it does mean is that your character’s arm moves back and forth in a repetitive jerking motion while the word “whacking” appears above his head. And they let children play this game! Well, while Nick was upset about whacking, I offered him some bonus wood!

This game is fucking sick.

Unfortunately, this was the least of our problems, as we quickly discovered that we didn’t know how to add each other as neighbors, thus exposing the fact that we’ve all been on Facebook for years, but have no idea how that shit actually works. We could send the neighbor requests just fine, but as you can see here: 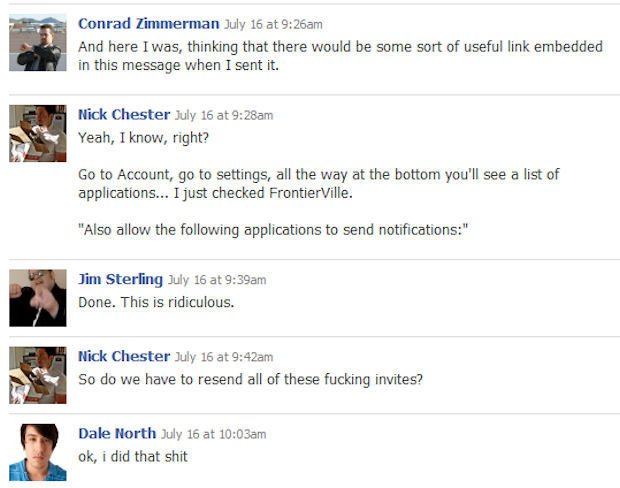 Things did not go according to plan.

Conrad Zimmerman had joined us by now but things weren’t getting easier, and we realized something — we were so used to our so-called hardcore videogames with their intuitive menus and convenient gameplay mechanics, that we actually did not know how to play a game enjoyed by out-of-touch, technologically blind housewives around the world. As Nick said:

“This game is too casual for us hardcore gamers. It’s probably so obvious how to accept a request, but hell if I can figure it out. I sent you a goat, though.”

We expected it to be easy, dumbed down for the casual masses. If you get a message on Facebook saying that you’ve been added as a neighbor, one should reasonably expect there to be a handy link letting you swiftly add that person. No link is there, though. It was eventually Conrad who figured out that you have to go to the Facebook mainpage, navigate to the right tab, scroll down to Requests, and find the FrontierVille request section. That’s right, you have to leave the game in order to add your friends.

This lack of convenient navigation is something FrontierVille is full off. From adding friends to accepting gifts and items, everything takes you out of the gameplay experience. As hardcore gamers, we don’t expect to be shunted around an archaic menu system, waiting for a brand new screen to load every single time we want to interact with someone or something. It’s frustrating and it’s a waste of time, and as you’ve seen here, it’s such an alien concept to us that we actually didn’t understand how to deal with it.

That wasn’t the worst of it, though. Tune in next time to find out how FrontierVille is more sinister than even the trite jokes make it out to be.