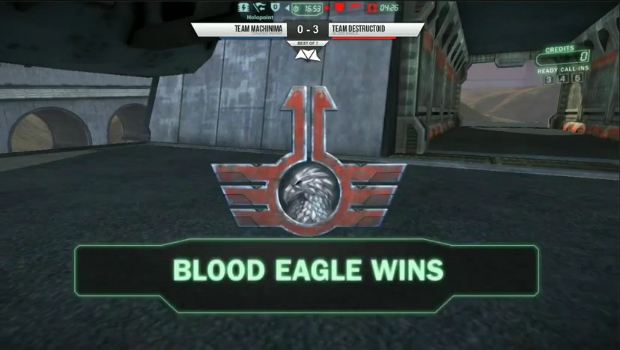 In case you missed it, Destructoid challenged the folks at Machinima to a friendly round of Tribes: Ascend yesterday and we absolutely demolished them! Playing like the well-oiled robot overlord we are, we won the first four rounds in a row in this best-of-seven match-up, sealing our victory in under an hour of play. Go Team Dtoid!

The match-up itself was marred in controversy. We were accused of hiring “ringers” to play on our behalf (we like to call them “Dtoiders”, thank you very much!), our team members had their names sullied and body parts described in frightening (yet accurate) ways, and there was an overall air of foreboding surrounding this so-called “friendly” meeting of gamers. And yet, after the dust settled and friendships began their process of healing, talk of a rematch immediately filled our Twitter feeds, so stay tuned for that!

In the meantime, check out the stream above for Hi-Rez’s professional-caliber play-by-play, and hit the jump to see the Dtoid stream, complete with our own (vulgar) commentary!

As I said, Team Dtoid nailed Machinima to the wall four times in a row, with the only real challenge being the match played on the brand new map “Tartarus”, which ran straight down to the wire and ended in a nail-biting 4-3 victory.

Throughout the night, dndmatthew and Holopoint maintained a steady stream of flag captures while Ryan Perez and Jahok held off attackers at our base, King Foom and Arttemis kept a nails-on-the-chalkboard-like hold on Machinima’s generator, and UncleAlty filled every role in between, all the while barking out orders and keeping everyone focused. Our team — who only managed to practice together for a few short hours prior to the event — showed professional-quality communication and tactical skills, constantly adapting to every situation and making sure that every team member was filling a vital role at all moments.

The first two matches ended in under eight minutes each, with our flag cappers running in and out of Machinima’s base so fast it made their heads spin. The aforementioned third match on Tartarus, on the other hand, was like a brutal game of sci-fi tug-of-war, with each team scrambling for the full 25 minutes to find a successful ski route through the uncharted forest of this sexy new map. By match four, however, Team Dtoid was back on its game, achieving victory in yet another eight minute match.

I couldn’t be more proud of our community for working together so successfully under such intense pressure and maintaining their composure throughout. You all owe yourselves a pat on the back! Thanks again to King Foom, Ryan Perez, Arttemis, dndmatthew, Holopoint, Jahok, and UncleAlty for kicking ass, and to everyone who came out to cheer us on!