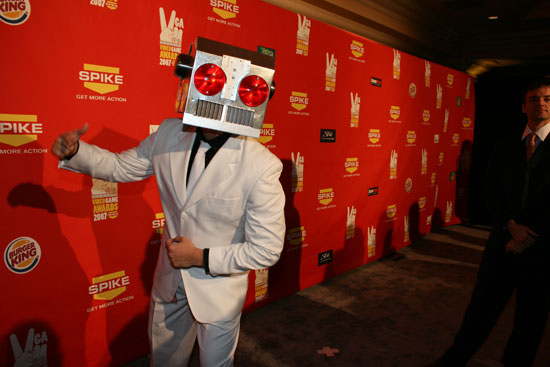 Last night, Spike TV filled the Mandalay Bay events center with various videogame industry types, girls excited to see celebrities, and other people instructed to scream on command. The show is set to air on Spike TV on Sunday, December 9 (9:00-11:00 PM, ET/PT), but we were there (we smelled Samuel L. Jackson!), and we figured you’d want a little preview. (Spoiler alert!)

The big winner of the evening was 2K Boston/2K Australia and their game BioShock (which you may have heard of). The title took three awards, including “Best Xbox 360 Game,” “Best Original Score,” and the coveted “Game of the Year.” Boston-based videogaming rock stars Harmonix also scored big, picking up the “Studio of the Year” award, and their game Rock Band picked up “Best Soundtrack” and “Best Rhythm Game.”

After the jump, you’ll find a full list of the winners, as well as some key highlights from the show. As a reminder, if you’re not happy with the winners, don’t bitch at Spike — these selections were made by a committee of esteemed members of the videogame industry media … and us. 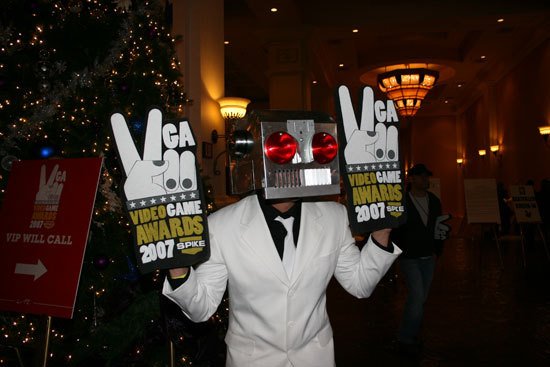 A list of random show notes, which is only a sampling of what you may (or may not) see tomorrow night when the show airs:

* The elaborate stage was a mock arcade cabinet, joysticks and all. And a lot of loud, scary pyro, just like you remember arcades were like back in the mid 80s.

* Donkey Kong phenom Steve Wiebe was backstage attempting to get to the game’s “kill screen” before the end of the ceremony. He wasn’t able to in the time allotted.

* Gamecock invaded the show floor, including their trademark rooster outfits and full-body Hail to the Chimp character outfits. The ‘Cock stormed the stage after the “Game of the Year” announcement, taking the microphone and proclaiming that “Gamecock is for the children!” As a result, BioShock designer Ken Levine lost a chance to give an acceptance speech, and was awkwardly ushered off the stage.

* Kid Rock (adorned in fur, as you’d expect) performed his new single, “So Hott,” which has the not-safe-for-television chorus: “So hott/I don’t wanna be your friend/I wanna f**k you like I’m never gonna see you again.” The single has a Southern Rock feel, derivative of Foghat’s “Slow Ride,” which Kid Rock and his band played a portion of in the middle of their short set.

* The Foo Fighters performed two songs that evening — “The Pretender” and “Learn to Fly.” The band burst into the latter following Harmonix’s “Studio of the Year” win, cutting off an introduction by Rock Band peripheral guru Daniel Sussman.

* Harmonix’s Helen McWilliams may have had a bit to drink, in true metal form. While accepting an award, she threw up the devil horns, confirmed that Slayer does indeed rule, and applauded Guitar Hero III for having a killer soundtrack (although Activision’s game didn’t take home the “Best Soundtrack” honors).

* Speaking of Activision, all of their games received a huge pop from the audience, who burst into applause at the very mention of any of their nominated titles … even though only one of their games (Infinity Ward’s Call of Duty 4) took home an award.

* As a presenter, Don King was given the opportunity to unveil the name (and nothing more) of 2K’s new boxing title, Prize Fighters.

* The award intro videos were clever and entertaining, and worth watching the show just to see. Be warned: they play on gamer stereotypes and tend to lean towards Spike’s late-teen to early-30s demographic. But seeing as how you’re reading Destructoid and the word “fart” might still make you giggle, we’re sure this won’t be a problem.

* Tila Tequila is short like Toad, and her skull is the shape of Pac-Man, which we can assume is why she was asked to appear as a presenter. At one point during the show, Tequila tries to pick between one of three consoles — the Wii, the PlayStation 3, and the Xbox 360, which were placed upon pedestals on stage. She can’t decide, and she comes to the conclusion that she’s “bi-gameual.” Groans were audible throughout the arena.

* During the taping of the ceremony, Spike aired commercials for upcoming programming, including a trailer for what looks to be the most amazing film ever made. The film in question is Edison Force, which stars Morgan Freeman, L.L. Cool J, and Justin Timberlake. No, we’re not kidding.

* This year’s awards will mark the first television appearance of Video Games Live, who put on an awesome performance, as usual. They provided music for much of the evening, but their actual performance (which includes playing videogame music along with on-screen accompaniment) was disappointingly short.

* The Mandalay Bay sells some of the most bland hoagies you’ll ever have the “pleasure” of eating. Please stay away from them if you can.

* The stadium seating was littered with foam “Spike Video Game Awards” hands; Niero snagged a bunch, and we’ll be giving them away on the site in the coming weeks. 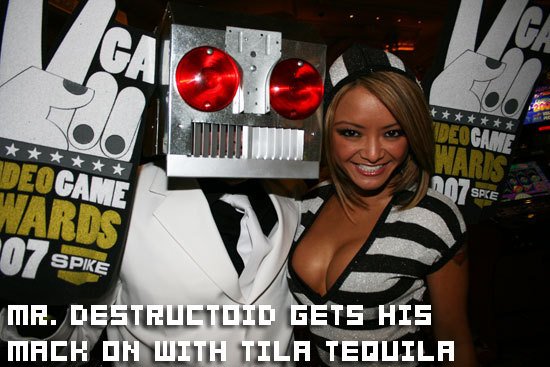 A number of trailers will also be premiered tomorrow. A quick (and possibly incomplete) run down of what we saw:

* Gran Turismo 5 Prologue: Looked so good, it’s unlikely that it was being rendered in real time. I look forward to being proven wrong.

* Afro Samurai: I’m pretty sure this game was announced over two years ago, so it’s disappointing that the new trailer shows no actual gameplay footage. The trailer did have some pretty bloody CG hands and a sword, so I guess we’re inching towards seeing something that resembles a game.

* TNA iMPACT!: For some reason, this was being hailed as the world premiere of Midway’s Unreal Engine 3-powered wrestling title, but we know that’s not true. It did, however, show some new gameplay footage. Not surprisingly, that footage was of dudes wrestling.

* Borderlands: The game looks pretty, and it shows promise of having a rich science fiction plot. Unfortunately, the trailer had a big build up, but didn’t really deliver anything in the way of “the goods.”

* Little Big Planet: The new trailer didn’t appear to show off any new gameplay elements, but it continues to look like an amazingly fun and unique experience. 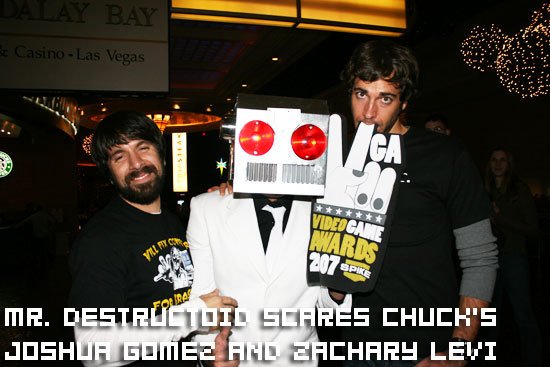 Oh, I guess you want to know who won what, right?

GAME OF THE YEAR
BioShock

STUDIO OF THE YEAR
Harmonix 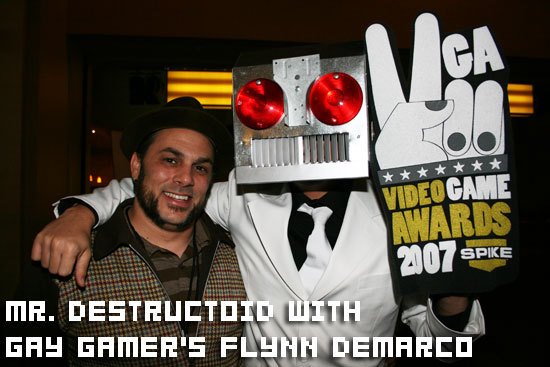