From the beginning, this murder (and I’ve seen a lot of them over the course of my career) struck me as too simple. Kyle Hebert — a voice actor you may recognize as the voice of Ryu from Street Fighter — was found dead in an elevator. According to a preliminary autopsy, he had been stabbed multiple times in the chest with a fountain pen. No signs of a struggle. The last people to see Mr. Hebert alive were four Danganronpa 2 characters — Akane Owari, the Ultimate Gymnast; Kazuichi Soda, the Ultimate Mechanic; Ibuki Mioda, the Ultimate Musician; and Mikan Tsumiki, the Ultimate Nurse. The quirky quartet had dinner with Hebert before parting ways, mere hours before the murder.

Such is the setup for the Danganronpa Murder Mystery, an event put on by NIS America at the relatively young Anime Conji, located in beautiful San Diego. As promotional events go, an all-day murder investigation is certainly unique. It wasn’t press-exclusive, either — I believe the only two major gaming outlets covering the show were Destructoid and my new pal Steve from Hardcore Gamer. The rest of the participants were all convention attendees.

At 10 AM, interested guests shuffled into one of the panel rooms for an introduction video from series antagonist/mascot Monokuma & briefing from NISA’s Tiffany Chin. There were six Truth Bullets (read: clues) scattered around the convention hall (one was fake & one was a secret). Attendees had until 5 PM to collect five clues, at which point they would be given the opportunity to vote in the Class Trial.

For the most part, the Truth Bullets were easy to uncover. Within an hour, the location of almost every clue had been uncovered by someone in the convention. All you needed to do to get your five clues was follow a large group of con attendees — or, if you were less adventurous, find an otherwise innocuous corner utterly smothered by people. An hour and a half later, the culture had shifted. People could tell who was looking for clues, and would just give them the locations. Truth Bullets were even moved and stolen, so the NISA team spent a decent amount of time literally patching their real-life game.

Even though I was given access to the class trial, I still felt a deep need to solve the murder on my own. Like I said before, I’ve seen a lot of crimes and dastardly deeds in this line of work. And I’ve played both Danganronpa games! This’ll be a cinch, right?

Here’s what the six Truth Bullets told us. Before the Danganronpa cosplayers had dinner with Mr. Hebert, a container of pesticide went missing from the storage closet. During the dinner, a blackout occurred. When the lights went back up, there was a small splash of juice on the table. After dinner, Mikan went for a walk around the convention hall, eventually running into Akane being accosted by security. Akane, still hungry after dinner, attempted to climb the elevator shaft in the hopes of finding more food elsewhere. Meanwhile, Kazuichi left dinner with a stomachache, heading immediately for the bathroom. When he left, Ibuki was waiting outside for him. 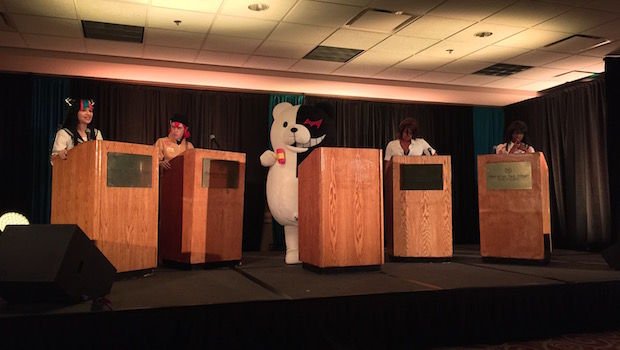 My theory was a tad more complex than what actually went down. I figured Ibuki was the culprit. She poisoned both Kazuichi & Mr. Hebert; Kazuichi had gotten a lighter dose to weaken him so he would go to the bathroom, but Hebert got a stronger, lethal dose. Ibuki stayed outside the bathroom, establishing an alibi for herself, and stabbed Hebert’s already-poisoned corpse to change everyone’s assumptions about the crime. This turned out to not be the case.

Over the course of the class trial, it was revealed that Kazuichi had poisoned his own glass, and then swapped them when the lights went out. And then once that was revealed, the trial continued to hammer this point home. The class trial was over in twenty minutes. I can’t say it lived up to my expectations, but it’s also understandable. I figure from the perspective of NISA, if everyone feels like they solved the murder, they go home happy. But from the perspective of a crime enthusiast, I was hoping for more. Danganronpa fans seemed to really enjoy themselves, and with good reason! The cosplayers embodied their respective characters perfectly, and the giant Monokuma suit brought the hilarity inherent in that character design to the forefront. Hopefully future Danganronpa murder mysteries pull from the source material in terms of complexity.

I did find the behind-the-scenes work interesting, though. For example: a simple photo of Monokuma looking dejected next to a “Please clean up after your pet” sign posted to the NISA Twitter account had to go through licensors. And you don’t think about how much being a mascot sucks until you see the results; Tiffany emerged utterly drenched in sweat after a couple hours outside in the San Diego heat. According to a first-hand account from NISA’s Jordan Vincent, the Prinny suit is worse. Penguins don’t have hands, you know. 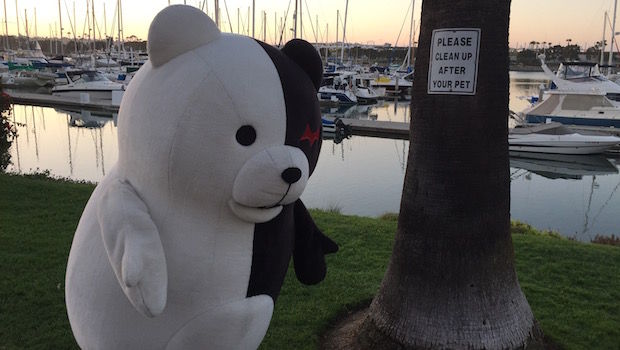 Themed press events usually have a real tackiness to them. They’re either so expensive that they feel exceptionally skeevy or they’re cheap and feel like a waste of everybody’s time. NISA seems to have it figured out here; spend money on the fans first, press second. It doesn’t make sense for most outlets to cover this, but if the amount of people I saw participating is any indication, it was quite popular with Anime Conji attendees. Danganronpa is something of a niche franchise, so giving back to the community in this way is a genuinely cool thing for a game company to do. Even though I was somewhat disappointed as a fan, there’s no denying the work involved, and I’d be lying if I said I didn’t really enjoy myself. Hopefully the team at NIS America adds more of a “mystery” angle next time around!