I know. I’m tired of hearing about it too. Talk about information overload! But, along with the piles of info and news coverage came piles of iPad Apps and games. Ask anyone who purchased an iPad this weekend and they’ll tell you that sorting through them to find something decent is a bitch. That’s why we made our quick picks of the best games to try on your new device.

If you haven’t seen the iPad in action yet, you should know that the gaming is surprisingly good. We’re talking 3D on par with PlayStation 2 games, and 2D that is high-resolution and fantastic looking. Sure, there’s a lot of crap out there, but if you dig around, you’ll find some pretty great stuff from respected game makers.

Hit the jump to read our picks for some of the best iPad games out right now.

Telltale decided to debut their next Sam & Max game on the iPad. That should tell you how great this is. It looks fantastic, sure. But it’s also a lot of fun, with some really great puzzles to go along with that killer presentation. We’re talking full-blown, respectable 3D here. Oh, and full voice acting that sounds great coming out of the iPad’s speaker. Forget that jerky crap you saw in iPhone games; this is the real deal. Tapping to interact has never felt more intuitive. In this story, Max has crazy psychic powers that you’ll take over with your fingertips, making for some very interesting puzzle play. This is a title that really shows what you can do with an iPad.

To be fair, the game did have some slow down when the 3D action got a bit heavy. Not a deal-breaker, though. You must see Sam & Max’s first portable outing. Fantastic! 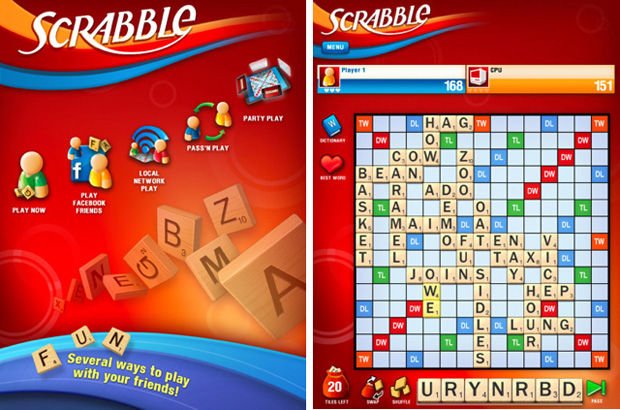 This one is a must-buy (unless you can’t spell), and a perfect showcase for how well board games can work on the iPad. The draw here is beautiful, high-definition visuals and slick control. It’s the same puzzle game you’ve played a billion times, but without the hassle of trying not to lose letter tiles in the couch cushions. I spilled beer on my last Scrabble board, so there’s that too. Simply drag letter tiles to your rack to spell out words on the game board. Look up words in the built-in play dictionary. Rock out to your own tunes. You can play it solo against the computer, but I had much more fun handing the iPad off in “Pass N Play” multiplayer mode. Of course, there’s also multiplayer and an awesome Party Play mode that lets four people play. Get this: iPod Touch and iPhone can serve as your personal letter tray. 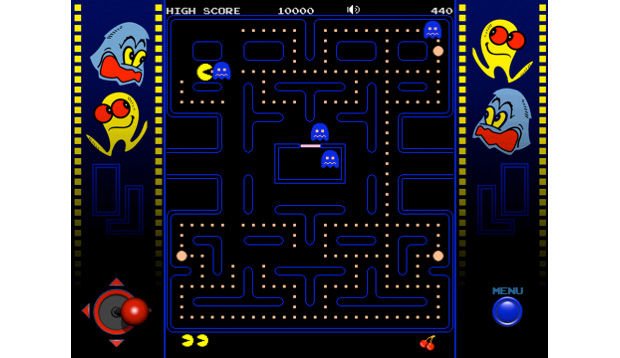 No, really. This is a pick for me. Here’s the thing: It looks perfect. It sounds perfect. It plays perfect. It’s spot on, and when you lay your iPad on a table, it’s like having your own little tabletop PAC-MAN arcade unit. Kinda. Don’t mess with that virtual joystick mode, though. Switch to the swipe mode, which lets you swipe anywhere on the screen to change PAC-MAN’s direction, locking the control to that direction. What really makes this game is that the swipe control is impressively responsive and tight. Don’t get hung up on the iPhone versions. This one rocks. 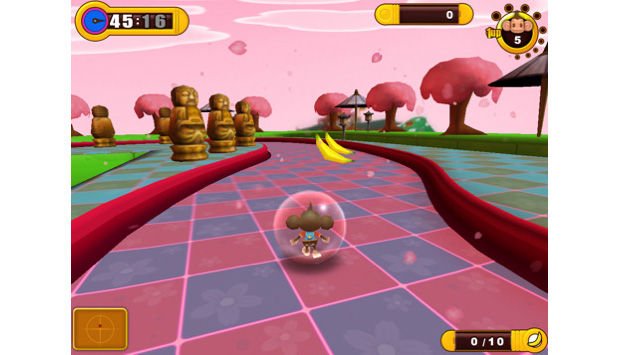 Super Monkey Ball was always that iPhone show-off game. Look, an accelerometer! Tilt to roll. Girls dig it. This Sakura Edition is mostly a visual upgrade from the recent iPhone release, but it looks so fantastic that I had to put it on this list. There’s still well over 100 levels that let you roll a monkey around, but now several more in an Eastern world feature cherry blossoms, fitting with the current season. The control is tight and the rolling puzzle action is as fun as ever. Aside from the main game, there’s minigames like Monkey Golf. A new one called Monkey Base lets up to four players play at once on one iPad. You’ll defend your base from a bouncing projectile with a slider. Catch the projectile and you can fling it into others’ bases. This game is bananas. 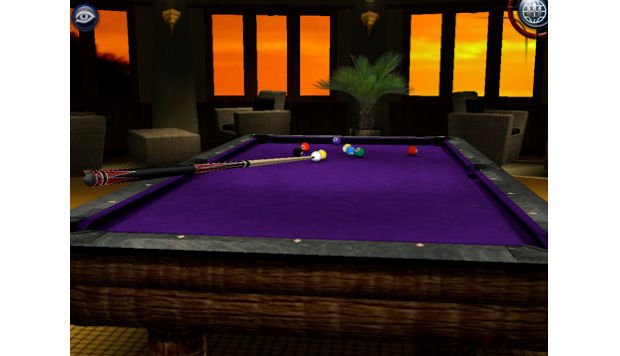 I know I keep coming back to this pool game, but it’s really great…if you like billiards. You get a very nice 3D representation of billiards (8 and 9-ball, Snooker) that has really easy control and great pacing. It’s one of those things you can pick up play through quickly, making it a nice on-the-go game. It was fine for iPhone, but the new iPad version looks great in its higher resolution. I tried pass-to-play multiplayer yesterday and it was great, but there’s also head-to-head online action, just as the name says. 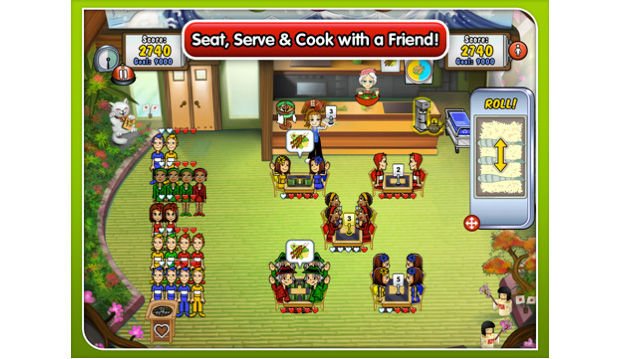 An iPad exclusive, Diner Dash fans can’t miss this. Actually, Grilling Green looks better than any Diner Dash prior. If you want to see now nice 2D games can look, check out this puzzler. You’re still waiting tables in this one, but now you’re helping with cooking duties with the Touch Cooker 3000, which has you pressing on burgers to get them to grill faster, or rolling sushi to get orders out. Mind you, you’re doing this while you’re taking orders, serving, and seating. It’s the best kind of stress. Multitouch lets you do more than one thing at once, and also lets a friend jump in and help. This is a fantastic iPad game that really takes advantage of all of the system’s abilities. 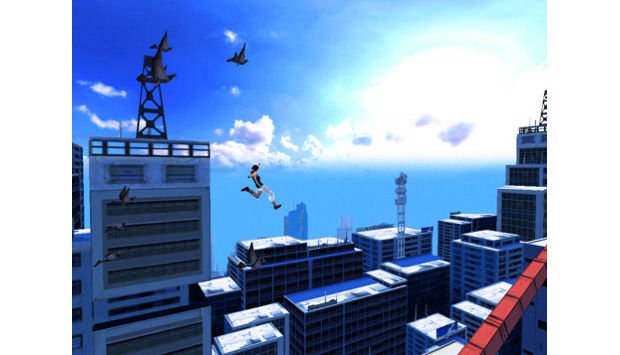 Mirror’s Edge (Electronic Arts, $12.99) – Woah! Pretty! Fast, like Sonic with finger flicking. I like it better than the Console version.

Flight Control HD (Firemint, $4.99) – Lovely. The same addicting air traffic management game from the iPhone, now in HD with more to do. Co-op and split screen have been added. 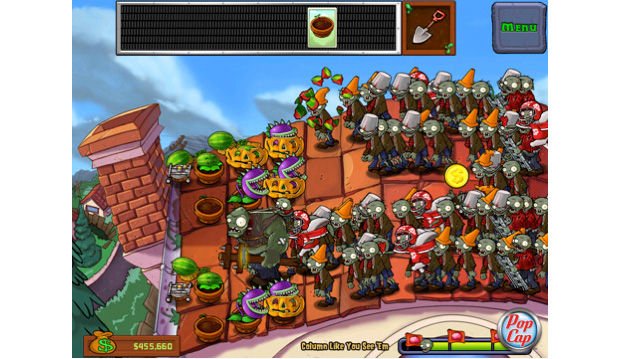 Plants vs. Zombies HD (PopCap, $9.99) – Yes, you have to buy it again. Now, with multitouch, you can touch many things at once! Also, the undead never looked so good!

Fieldrunners for iPad (Subatomic, $7.99) – Pass if you have the iPhone one, but if you don’t the tablet’s huge display makes this tower defense title a joy.

Titles Worth Revisiting At No Extra Cost (from iPod version)