When we first heard that Yggdra Union was coming to the PSP, we were a bit concerned. Why do port of a Game Boy Advance strategy title? How would it a good fit for Sony’s PlayStation Portable? The PSP has a large screen that won’t be kind to small GBA graphics, and the system’s library already contains plenty of other strategy titles. Yggdra Union was a great game in it’s day, but we just didn’t know how well it would go over as an update.

Anyone that has played Sting’s original GBA title will tell you that solid strategy game play was at it’s core, and we’re glad to say that this has carried over onto the new PSP version, alongside some visual and aural improvements.

Is Yggdra Union a successful port, though? And will it stand out among the many other PSP strategy titles?

Hit the jump to read our review of Yggdra Union.

So far, from what we’ve seen, the Yggdra Union “pitch” is that it’s a card-based strategy role-playing game. That’s true in a sense, but it’s probably not what you’re picturing in your head, and maybe not a totally clear representation of YU‘s game play. If anything, we would hope that the “card-based” part of the description wouldn’t scare gamers off.

Yggdra Union is pretty standard strategy RPG at it’s core. You still move your characters on grid-based maps, aligning them into formations and moving into battle. If you’ve played any SRPG, you’ve done this before.

The cards in this game are more of an enhancement to the strategy game forumla. You’re not really playing with cards as much as using them to aide you in battle and movement. Before each battle, you’ll choose several cards from your library, each with their own powers (spells) and movement points. At the start of your turn, you’ll choose one of the cards. Any of your troops on the map can use any number of movement points on this chosen card. 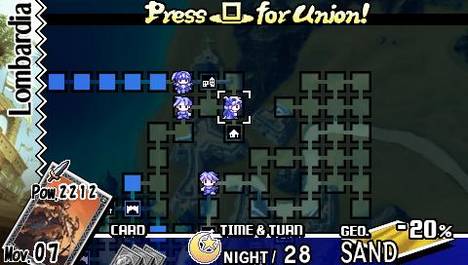 These cards also feature power rating numbers and spells, which come into play in battle. In battle, your chosen troop can be in either passive or aggressive mode by holding either back or forward on the PSP’s d-pad. Passive mode lets you charge a meter for either spell usage or aggressive fighting. For your turn, if your chosen character in battle meets all of the cards requirements, you’ll be able to use that fully charged meter to cast that card’s spell. If it all sounds like a lot to take in, know that it only takes a couple of rounds to get the hang of how the card system works, and that in the long run, it makes for an engaging strategy experience.

In Yggdra Union, weapons and troop placement also play an important part in strategy. Players will have to be mindful of what types of troops they use, as their weapon type may not work well against other types. For example, swords are strong against axes, but not against spears, so you won’t want to walk your sword users into a valley full of spear users. The “union” part of the game’s title refers to the game’s union game mechanic, a system that allows your allies to join your controlled character in attacks against the enemy. YU only permits one attack per turn, encouraging you to make that attack count. You do this by aligning your characters in either a “+” (female lead character) or “x” formation (male character). Doing so lets everyone in that formation join in on the attack. This system requires players to think ahead, keeping them on their toes in battles where they’re outnumbered or at a disadvantage — which is almost every battle.

This brings us to Yggdra Union‘s level of difficulty, which ranges from challenging to unforgiving. Of course, nothing is worse than an easy strategy game, so we’re not necessarily complaining. There are some battles that are two and three-part, taking sometimes an hour or more to finish. If you die during the second part of this battle, you’ll be forced to start it again from the beginning. Most battles require the game’s key one or two characters to never die, forcing you to play more carefully. Perhaps the most challenging aspect of Yggdra Union is how few opportunities there are to recharge your characters hit points, or in this case, “morale.” If you never lose a fight, you’re fine. But every time you do die, your morale number takes a hit. There are no healing items, and only a couple of healing cards that require successful usage in battle to heal. On top of that, you don’t even get the chance to heal in between battles, making players think twice about charging into any battle. Fans of the original GBA title will be glad to know that your characters now recover morale after they level up, though. 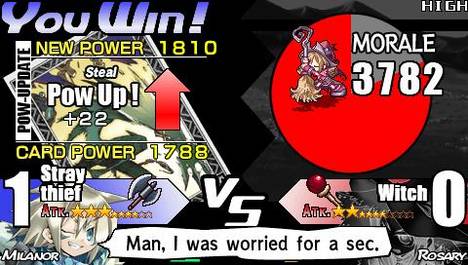 The move to the PSP brought about several improvements in presentation. The original GBA title was quite busy and cramped. The PSP’s larger screen allowed Sting and Atlus to spread things out a bit. Yggdra Union is still pretty busy, but it looks much less daunting now. The character art, maps and just about everything else have received new, higher resolution art that looks excellent on the PSP’s screen. Finally, YU is a pleasure to listen to. The game is fully voice acted, and the performances are mostly top notch. The orchestral musical score is also fantastic.

Yggdra Union’s story isn’t anything fancy or out of the norm. You play as princess who narrowly escapes the invasion of her country. She is saved by some bandits who she later allies with to retake her kingdom. It’s your standard “you against many” story, but the storytelling keeps things moving along nicely. Good dialogue, fresh character art and quality voice acting all help keep your interest in between battles.

While challenging and strategy intensive, Yggdra Union is polished and easy to like. The combination of an involved strategy game play design and steadily increasing difficulty keeps you hooked, and the thrill of winning against massive armies keeps you coming back. While Yggdra Union may not be the best choice for casual gamers or newcomers, strategy and role-playing game fans will find plenty to enjoy here.