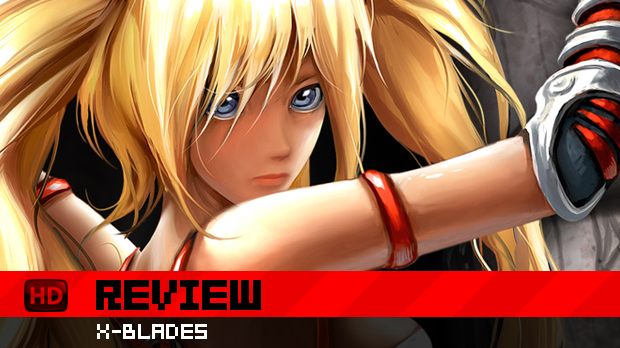 X-Blades and I have had a deeply personal journey in the months leading up to its release. Publisher Southpeak loves sending me screenshots of the game as some sort of celestial punishment for a crime unknown. Perhaps they were able to predict the review score I was destined to give their hack n’ slash action game, and were tormenting me in advance.

Re-read the first paragraph and take a wild guess, as we review X-Blades.

While X-Blades is light on story, one does exist. You play the role of Ayumi, a self-professed treasure hunter that wanders the world in just her underwear, looking for rare treasures so she may acquire power and fortune. One day she uncovers a mysterious cursed artifact, which does what all mysterious cursed artifacts do, and unleashes all kinds of nasty horror around the world. Luckily, Ayumi has two swords with guns on them and access to a whole host of magic spells. That’s convenient.

X-Blades has an untraditional level progression that plays more like a series of arena battles than a plot-driven linear game. Each new area is completed by destroying all the monsters and then unlocking the exit. While Ayumi can continue her adventure through each of the exits, you can also work your way back through the game, running across previously traversed exits in order to mop up undiscovered items or do a bit of training. If you really, really want to … and you don’t.

Combat focuses on Ayumi’s three main modes of attack — swords, guns or magic spells. Different enemies are vulnerable to different attack styles, and are generally easily recognizable. If they’re flying around, you’ll need spells, if they’re bulky and up close, you’ll need to use the swords, and if they’re small, hard to hit monsters, you’ll need the guns. While it’s a nice idea, the game is so counter-intuitive and piles on so many different enemies at once that the whole thing becomes a big, uncomfortable mess.

You will nearly always be fighting every enemy type at once, and it’s practically impossible to deal with them efficiently, because if you choose to deal with one enemy, you’ll be completely vulnerable to the others. If you try and deal with the flying enemies, you’ll get raped by the ground-based monsters, and vice versa.

This problem isn’t helped by the fact that your targeting system is almost offensively horrendous. It seems to want to lock onto only the most harmless and far flung enemies, ignoring anything that is close enough to actually be a threat. It doesn’t even matter if the enemy is behind a wall, the target reticule will fix on the thing, leading to incredible frustration. If you’re lucky enough to get the reticule on the enemy you want, you can lock it in place, but doing so will leave you even more defenseless to the attacks of others.

Ultimately, what we’re left with is a chaotic mess of frantic button pressing that completely ignores the combo system that was put into place. While Ayumi can unlock new combo attacks, pulling them off is pointless and time consuming. The only way to play is to just smash buttons and hope for the best — a tactic carried over into the ridiculously lengthy and boring boss battles.

There are other basic design flaws as well. Ayumi can jump or perform a dodging leap, but both moves are mapped to the same button, often leading to you doing one thing when you wanted to do another. This problem is highlighted during some of the incredibly ill-informed platform sections, that are frustrating, poorly crafted and full of instant deaths that will occur often thanks to the spastic camera and loose control of the character model. Also, the double jump only works when it wants to.

Even worse is the lazy repetition of stages. The final portions of the game force you to work backwards through the game, basically replaying everything. The last hour of the game is so boring, sloppy and pointless that I was actually begging it to end.

The faults are so hard to ignore that I’m shocked they’re there. That said, the game is not terrible and can even be enjoyed sometimes by forgiving souls with a strong stomach for hack n’ slash games. The combat is repetitive but solid, and sometimes it’s just fun to smash stuff. There are also hidden items throughout each stage that can be collected and which upgrade Ayumi’s abilities, encouraging exploration for those who are anally retentive.

Stealing a page shamelessly from Devil May Cry, enemy souls can be collected and put toward the acquisition of spells. You can also use souls to replenish your health and MP meters, although the cost of these items increases with use. However, since souls are so easily come by, the cost is nearly always negligible, and regular abuse of the system is essentially required to survive each stage, which plays more like a battle of attrition than anything involving skill.

At least the game looks good, with cel-shaded cutscenes and brightly lit, originally designed environments that pack the lens flare like it’s going out of style. Character designs are unique and the color palette is a nice change from the bleak, drab offerings that usually come with the genre. The music is pretty catchy as well, despite much of it being generic rock. Wish the same could be said for the voiceovers, which range from the aggravating to the indecipherable.

X-Blades is a game that most people will be right to ignore. It offers nothing of substance, and the problems are so vast that a lot needs to be forgiven in order for any fun to be had. Hardcore action fans will definitely get a rental from what can be a decent experience, but those with short tempers, refined tastes or something important to do with their lives will want to steer clear.