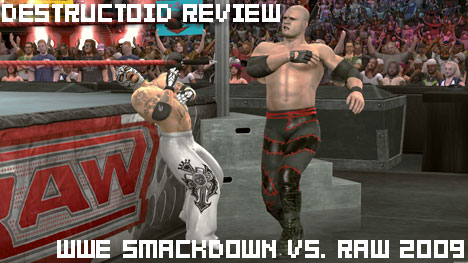 In 1984, Stevie Wonder wrote the classic ballad “I Just Called To Say I Love You” for the film The Woman in Red. In the song, Wonder sings of a world void of life’s little joys, with lyrics like “No autumn breeze/No falling leaves/No even time for birds to fly to southern skies/No libra sun/No Halloween/No giving thanks to all the Christmas joy you bring.”

If THQ were to commission Wonder to write the song for their yearly wrestling series, Smackdown vs. Raw, it might go something like this:

“No libra sun/No Halloween/No WWE Smackdown. vs. Raw for a November release.” Except there would be some kind of rhyme and elegance in the lyric, possibly involving a folding chair and a steel cage.

So is this year’s title, WWE Smackdown vs. Raw 2009, any good? Hit the jump for our full review.

[Note: The game was played for reviewed on Xbox 360, but just about everything here applies to the PlayStation 3 version of the game as well. Based on the few hours I spent with the PS3 version, both games offers up the same experience and are matched feature-for-feature. Unlike last year’s title, the PS3 version is visually on par with the Xbox 360 title.

It should also be noted that the PlayStation Portable and PlayStation 2 versions of the title offer up most (if not all) of the same features, outside of the Highlight Reel and downloadable content (which is not factored into this review).]

Like many games that get year-after-year iterations, WWE Smackdown vs. Raw 2009 looks and in some ways even feels a hell of a lot like last year’s title. Firing the game up for the first time, veterans of the series will almost immediately feel at home. The game shares many of the same assets with last year’s title — some entrances and animations for instance — and plays mostly the same.

That’s not to say that the developers haven’t made noteworthy improvements in terms of polish and playability. Overall, 2009 feels smoother when it comes to control and speed than previous iterations, and is relatively intuitive in terms of pick-up-and-play. Load times, a long-time Achilles Heel of the Smackdown series, have been significantly improved — there are no more 30-40 second wait-times between entrances or match starts. Of course, with a new game entry in the series always comes new features, and Yuke’s comes hard this time around with a number of new modes that fans should welcome with open arms. 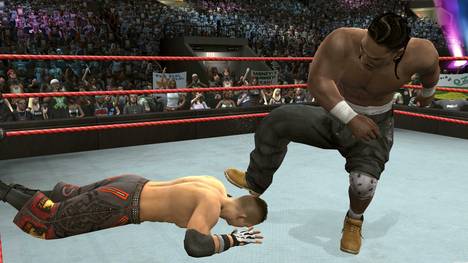 “Road to Wrestlemania” is the game’s new story mode, where players can choose from one of six different story paths for specific wrestlers, one of which is a tag-team path featuring Rey Mysterio and Batista (which can be played cooperatively). The story modes each feature their own specific storylines, complete with cut-scenes and voice over work by WWE talent. Unfortunately, “Road to Wrestlemania” is limited to a handful of playable superstars (you can’t use a created superstar), but with each lasting between two and three hours a piece, there’s plenty of gameplay crammed into the mode. The mode is fun to play, many offering branching paths to different storylines and unlockable content, and fans will get a kick out of finally being able to play through multiple “angles” and feuds with their favorite superstars.

The cooperative career path is a nice addition, although it’s unfortunate it can only be played locally (and in a few matches one player will be a spectator only). It is, however, a good opportunity for the game to show off its new focus on tag-teams with the new “Hot Tag” mechanic. Instead of standing idly by while your partner is the legal man in the ring, players can rile up the crowd by pressing up or down on the d-pad; doing so builds up the “Hot Tag” meter. Once full, the legal man can reach out for a “desperation” tag, and the player who built up the “Hot Tag” will enter the ring “fired up.” A quick time event sequence allows the now legal player to knock down both opponents, and they’ll automatically enter the ring with full momentum. In theory, this is the best way to “turn the tides” of a match, but because it can be built up quickly and easily within the first minute of a match, it’s more likely players will waste it as an early tactic. 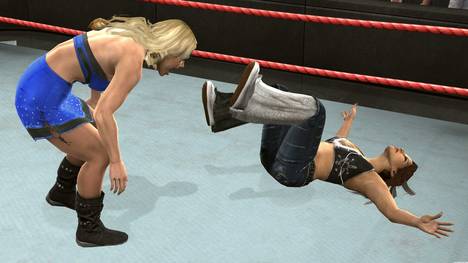 In addition to the new “Road to Wrestlemania” mode, Yuke’s has also included a “standard” career path which allows you to play using any superstar or diva on the roster (including your created character). In this mode there are no cut-scenes, there are no “feuds” or storylines; it’s fairly barebones, and you’ll just hop from match to match picking up wins and working your way through championship belts (yes, one character can hold just about all of them in the game’s career mode).

The career mode is also currently the only way to build up stats for your created wrestler. Depending on how you perform, you’ll gain stats accordingly; using a lot of submission tactics will up your submission skills, or using a foreign object will increase your “hardcore” skills. This is a great way to customize your character through usage, but it’s also something that could greatly upset fans of character creation, as they’ll have to play through a somewhat tedious career mode to build up their created superstars.

[Note: THQ is aware of this issue, and has issued a statement saying that a patch that will change this will be available for both the Xbox 360 and PlayStation 3 before January 31, 2009. The patch will allow “players to give all of their created superstars full attributes after completing the new Career Mode one time through,” according to the statement.] 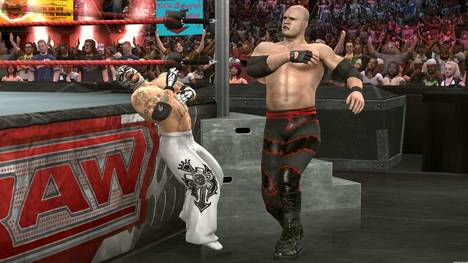 The Smackdown series’ notable and deep create modes are back this year, once again crammed with options and flexibility for fans looking to create their own superstars. In addition to a superstars look and move-set, players can now “Create-a-Finisher” by stringing together sets of animations to build a devastating and personalized move.

This is a welcome addition to the feature set, and the mode allows you to customize wild-looking finishers that most fans should be happy with, but is a bit limited in scope. For instance, all created finishers begin from the front-facing position. And because the game dictates what animations can be linked together, you sometimes feel as if the game is holding your hand through the creation process rather than giving you true freedom. Regardless, it’s a great step in the right direction, and offers enough flexibility that I lost a few hours in this mode alone.

Taking a page from Halo 3’s saved films, “Highlight Reels” are another addition to this year’s game. You can now pause the game at almost any point in the match to replay and save match clips. Players are given also the option to adjust camera positions, add sound and video effects, and more. The clips can later be shared with other players online (via the game; there is no YouTube or web support). 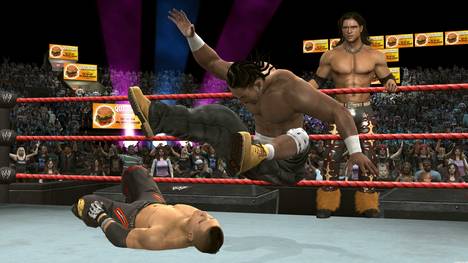 The “Highlight Reel” is a great feature for hardcore wrestling fans, many of which already have their VCRs on-ready to record their favorite in-game match moments for sharing online. For many casual players, this mode won’t feel like such a fancy addition, outside of replaying bits of a match for optimum s**t-talking; really, there’s only so many times you can see John Cena elbow drop the Undertaker through a table before it starts getting old.

Over the years, THQ has refined and re-defined the series, and they’ve build a juggernaut of a wrestling franchise. If you haven’t played a wrestling title in years, 2009 is a great opportunity for re-entry into the genre. With its out-of-control number of features and match types, along with its easy to pick-up-and-play mechanics, Smackdown vs. Raw 2009 is a solid title all around. Fans who picked up last year’s title might get a sense of déjà vu, but will welcome the new modes and things like optimized load times.

And if you’re one of those folks who waits for the price drop on last year’s title when the new game drops, do yourself a favor and spend the extra cash – while it’s not yet perfect, Smackdown vs. Raw 2009 is easily the best wrestling game we’ve seen this generation, hands down.