The PlayStation Portable has become quite the role-playing gamer’s system as of late. Square Enix’s Crisis Core is making big waves right now, but the string of good quality strategy RPGs have been the real highlight. Final Fantasy Tactics: The War of the Lions, Jeanne D’Arc, and Disgaea: Afternoon of Darkness have all managed to keep fans immersed in portable strategy bliss for some time, and the Wild Arms series first departure from standard, turn-based RPG gaming looks to continue this run.

After five series games, Media.Vision has shown that they know how to make an American Old West Japanese role-playing game — they’re the only ones who do it. But this is the first true tactical SRPG in the series, as well as the first portable game. It does take the hexagons from the battle systems of Wild Arms 4 and 5, but throws out the rest in favor of classic 2-D strategy gameplay.

Does Wild West sci-fi make for a good tactical SRPG? Does Wild Arms XF continue the run of strong strategy games for the portable? Most importantly, does this game still have that whistling song?

If I had to rate Wild Arms XF on presentation alone, it would probably get something close to a perfect score. This portable game absolutely shines with audio and visual polish, and it could probably give some console RPGs some competition as far as presentation goes. Everything from the classy Japanese opening cutscene to the anime art throughout makes you appreciate how much spit ‘n shine Media.Vision put on this title. And, as always, the musical score is top notch. The music of Michiko Naruke has always set the tone for the Wild Arms series. She and her team are back to bring the same feel to XF. And yes, that whistling song we all love is back in fine form. It joins some old favorites and new arrangements to make a stellar soundtrack. 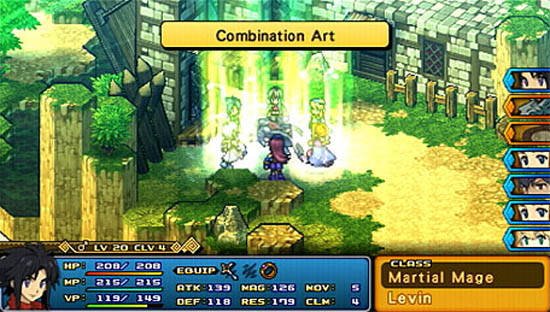 Players are dropped back into the weird western desert world of Filgaia. This time around, the perky Clarissa Arwin and her brother Felius are trying to get their mother’s stolen sword back. Because Clarissa looks a lot like the recently deceased princess, the two somehow get roped into saving the world from the Council. This group is taking the King’s illness as an opportunity to control and eventually overthrow. The story is served by way of text boxes and spoken dialogue over static manga-style images. They always look and mostly sound great, and that’s a good thing, as you’ll spend a great deal of time between battles looking at and listening to them.

Let’s face it: the only type of gamer open to this type of videogame is the tactical SRPG fan. I think it’s safe to say anyone interested in this title will already understand the concepts of turn-based gameplay on a hexagonal map, character classes and customizations, and the die-grind-retry pattern most of these games follow.

Players will learn early on that the die-grind-retry method of gameplay doesn’t work in Wild Arms XF. Each stage is designed to force you to find the winning combination of skills (called Originals) and character classes before each battle. In most cases, success is more about your pre-battle strategizing than your character’s levels. For example, one battle requires players to completely evade the enemy to succeed, but the only way to do this is to make sure at least one character has a special ability equipped — one that would let them move a barricade between players forces and the enemy. Each battle offers a pre-battle briefing, and you’re supposed to devise your strategy from this information. 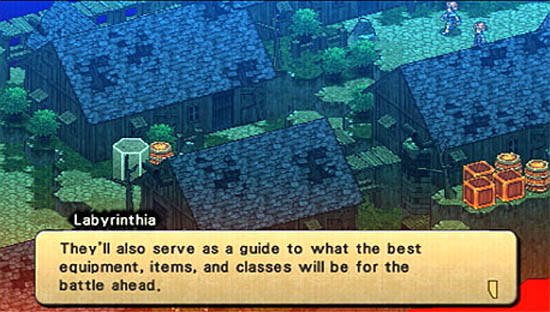 It’s this feature that makes Wild Arms XF increasingly difficult to enjoy. At first, I found it to be a nice change from the standard SRPG; the “kill every enemy” gameplay gets old after awhile. I really felt like I was actually strategizing, and that my choices are what led me to victory. Unfortunately, as the game went on, these strategies began to look more like preset puzzles that required the exact combination of character classes, skills, and equipped items to proceed. What’s worse is that the pre-battle briefings became less helpful in the game’s later acts. I eventually found myself lost in menu screens, desperately reading the skill and class descriptions in an attempt to find out exactly what I was doing wrong. When I was finally successful, it didn’t feel like victory. I was left with more of a “how the hell was I supposed to know that?” feeling.

Confusing menu screens and items that continually need to be re-equipped after each character class change made things even more aggravating. I lost count of how many times I went into battle without a weapon. The game does provide a feature to save favorite equipments sets that can be reloaded easily, but it’s easy to forget the items when you’ve spent so much time sorting through classes and skills. I don’t mind frustrating battles, but I can take only so many instances of being completely frustrated before the battle even starts. 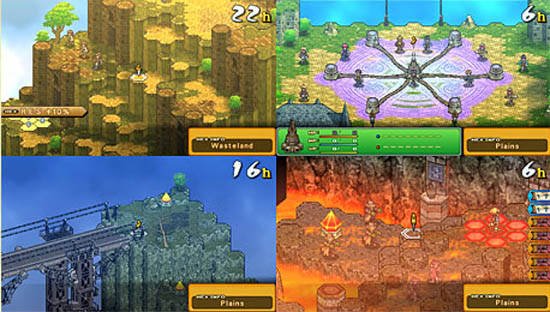 It’s not all bad. Wild Arms XF is packed with fresh strategy RPG innovations. The character’s job classes are mostly original. You have your typical fighters (Secutor) and magicians (Elementalists) among the 30 or so jobs, but the self-explanatory Gadgeteers, object-moving Fantastica, mystical Sacred Slayers mix things up a bit.  XF goes beyond typical stats, too. The RFX (reflex) stat determines your turn order, and each character has a set number of Vitality Points per battle. When these VP are gone, characters start to lose hitpoints. In another setting, I think these features and job classes would be more welcome, but in this title, they only serve to make the game more difficult.

It’s a real shame; the combination of the Wild Arms western setting and tactical strategy action sounded like a match made in role-playing heaven. While we appreciate the attempts at making an intensely deep strategy experience, Wild Arms XF may just be too deep for a portable game. Incredibly patient gamers may be okay with the chess-like pace and high level of strategizing, but for the rest, I’d recommend renting this title before purchasing.  In the end, this beautifully polished package of audio and video is marred by confusing menus, aggravating battle requirements, and difficult gameplay.

Score: 6.0 (Wild Arms XF looks and sound great, but you’ll really have to love intense planning to dig this title.)