When the PSP was first made available, it should be no surprise to anybody that the game I chose to debut on my own shiny purchase was Dynasty Warriors. Taking Koei’s button mashing hackstravaganza out and about with me sounded absolutely perfect, but sadly, it was not to be.

While a somewhat decent game, the PSP version of Dynasty Warriors felt lackluster and didn’t really impress. Rather than the huge battlegrounds of the console games condensed onto the portable screen, we were given a series of small skirmishes that were accessed via a “tactical” map. It was flat, a little dull, and only a shadow of its console brethren.

Well, Koei has heard the demands of fans for a true Warriors experience on the PSP and delivered with a port of Warriors Orochi on the PlayStation Portable.  The goal was to be as faithful as possible and deliver an experience that matches that of the console games. Did it work? Can you cram over 70 playable characters, voice acting, large battlefields and hundreds of enemies onto one UMD? Will LU BU destroy us? Read on and find out. 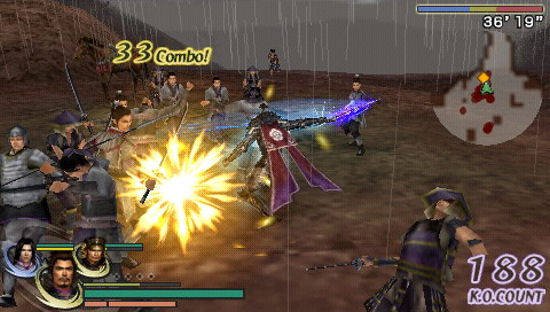 The main focus of this review is to compare Warriors Orochi on the PSP to its console peers and assess the success with which it was ported, but just in case you are unfamiliar with the game or have dementia, I ought to explain the basics.

Warriors Orochi is a crossover game that merges Koei’s flagship hack n’ slash games — Dynasty Warriors and Samurai Warriors — together. The ludicrous premise is that a demon called Orochi has used his magical powers to bend time and space, bringing the Three Kingdoms period of China and the Warring States era of Japan together for his own amusement. It is then up to us to join our overly dressed medieval warriors and take down the self-styled Serpent King, not once questioning the insanity of the whole idea. 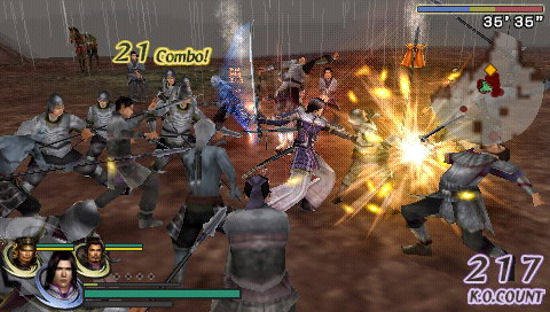 A number of new items were introduced to Warriors Orochi, all of them present on the PSP. Battles are now fought with a team of three characters that you can swap out at any point during a battle in real time, and there is a weapon fusion system that allows you to combine weapons found on the battlefield to make more powerful items. Altogether, Warriors Orochi was a highly successful game and is possibly the best Warriors game in the entire franchise.

I was certainly skeptical that Koei could bring all that to the PSP and was expecting compromises everywhere. Instead, I must report that this game is almost exactly how you would find it on the PS2 or Xbox 360. Every single character is there, every map is present and there are still hundreds of enemies to be taken down. Koei has worked to ensure that the console experience has been recreated as faithfully as possible and the effort has paid off. 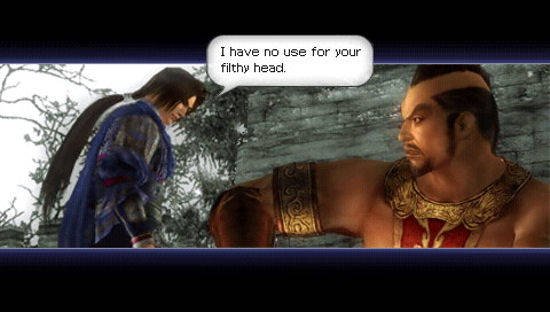 Obviously, there are limitations, and the compromises have been carefully selected. Cutscenes are now no longer rendered in real time, but are instead minimally animated still images (think MGS: Portable Ops) featuring the original voiceover work.On the subject of voiceovers, the in-battle dialog is no longer voiced but appears as text. Only a handful of player character announcements are voiced during a stage. These are highly negligible losses, especially compared to everything that managed to get crammed in.

As to be expected, the graphics have been downscaled as well. Character models are simplified and a bit blocky while the draw distance seems more noticeably short. Again, this is a fair compromise and nothing that should surprise anybody. 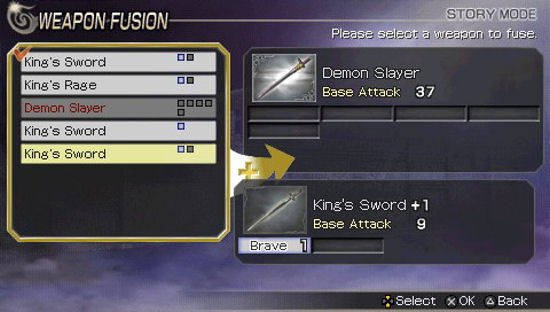 Outside of these instances, Warriors Orochi is amazingly faithful to its bigger brothers and the hack n’ slash action makes for some terrific portable gaming. The mindless slaughter is suited to a handheld environment and the full maps come highly welcome after the comparably rubbish small scale battles offered by previous portable Warriors games.

The only area in which Warriors Orochi falters is the control scheme, which is more due to the limitations of the hardware than anything else. Instead of using the shoulder buttons to switch characters, you have to press left or right on the D-pad, which is awkward and makes the character transition less seamless than on consoles. Zooming in on the map is also handled by the D-pad and presents the same problem. Similarly, the position of the select button makes whistling for your horse, one of the game’s finest additions, less straightforward. 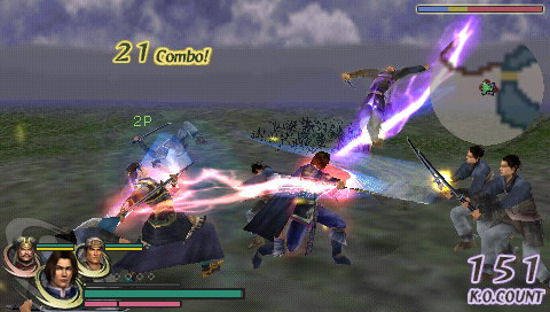 Ultimately, Warriors Orochi is still the excellent game it always was, and it makes a fine addition to the PSP library. As a port of the full game, however, it is a triumph, packing a ridiculously huge amount of content into a humble UMD. Fans of the Warriors games who own a PSP really should consider making a purchase, as having that much button mashing action on the go is highly recommended. Even if you’re not a fan of the franchise, however, I would suggest checking it out — I have a feeling you may find the game far more palatable in portable portions.

Score: 8 – Great (8 = Very fun — its essential gameplay aspects are cool and interesting, but may not be implemented in the best way)