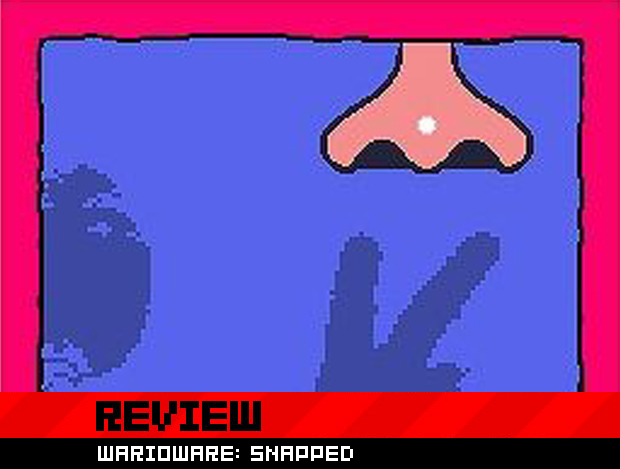 The DSi is officially out in stores, and so far the thing is selling like crazy. It’s strange for a console that has so few true exclusives at launch to be so hot. Thus far, the only games you can only play on the DSi are a handful of DSiWare exclusives: download-only games made specifically for the console. The most high-profile DSiWare title out right now is definitely WarioWare: Snapped!, the sixth game in Nintendo’s ever-popular “micro-game” series.

I love WarioWare. It’s probably the only series that, in my opinion, has yet to strike out even once. Does WarioWare: Snapped! hold up the WarioWare tradition of good, dumb fun, or is this the first flop in the series’ history?

For the eleven minutes I actually spent playing WarioWare: Snapped!, I had a generally fine time. The approximately two hours I spent trying to get the game to properly recognize my face and hands? Not so much.

The game is basically a glorified tech demo for the DSi’s camera. In theory, there is nothing wrong with that. Wii Sports was a tech demo, not even a glorified one, and it still managed to sell Wii consoles and make millions of people very happy. The difference is, Wii Sports controls pretty well. The controls for Wario Ware: Snapped! are fair at best, and a nightmare at worst.

The game consists of twenty micro-games and one playable credits sequence. The first few games control better than the rest, as they work extra hard to teach you how to think about controling a game. It does take a few minutes to adjust to playing a game that requires no buttons or controler of any kind. You’ll use your hands and head to grab a few coins; you’ll pretend to be a wet dog and shake your head like nuts until you’re dry. You don’t actually see your face and hands on-screen while you’re playing, just a sillhouette. It works well to let you know what the game sees, and what it’s reacting to, while not forcing you to look at your own face the entire time. That happens later. After you play through five micro-games, WarioWare: Snapped! shows you an animated highlight reel of all the stupid faces you made while playing.

It’s not so bad; cute and quirky in the WarioWare style, but notably more easy and shallow than any other game in the series. Unlike past WarioWare titles, if you lose a micro-game in WarioWare: Snapped!, there is absolutely no penalty; you just go on to the next one. There are four sets of five micro-games to play, and you can literally lose every single one and still make it to the end.

There is one penalty for failing a micro-game; you won’t get to look at yourself acting like a jackass. The game only shows you the highlight reels of the micro-games you succeed in. For some, this may feel like a punishment, but personally, I actually liked not having to watch myself look like a dick after trying my damndest to play a game that becomes practically unplayable.

Those first five micro-games are forgiving, but as the game goes on, they get more and more impossible to play. The last five require you to play with another person. For those keeping track, that’s more or less a fourth of the total game. This is where the game really starts to punish you. If it loses the ability to recognize either you or the person you’re playing with, the game just quits on you. No pause until it can recognize you again, no”move onto the next one” option; just instant death. It’s just not forgivable for a game to kill you for its own inability to let you control it. I mean, imagine that you have a dog that you’re trying to teach tricks to, and every time it screws up, it hits you on the nose with a newspaper. Is that a dog you’d keep around?

In fact, the only times I didn’t succeed in WarioWare: Snapped! was when the game was doing it wrong. Unlike other games in the series, you get what feels like forever to complete each micro-game. It’s almost impossible to not do them right, as long as the game can see you properly. Those last co-op games took me forever to beat. I had to go into three different rooms, and eventually ended up scrunched up against my toilet with a friend, staring at my DSi, trying to get the game to look at me right.

It was then that I said aloud, “I don’t think this game could be any less fun if it tried.”

Things did get a little better from there, though. The game’s credits sequence is by far its best attribute. Unlike the rest of the game, you can actually play the credits for high scores, the controls always work, and it actually takes some skill to play.You control a little flying rollercoaster car, and your goal is to ram into the names of the guys who made the game as they come flying at you. It sort of feels like a simplified version of Bit.Trip Beat, but with the camera set from the back. There are even enemies to avoid, and cakes to collect.

It’s this credits sequence that will keep me playing that game off and on for the next few days. The rest of the game will be something I revisit much less often, probably only when showing the DSi off to people that don’t own one, or in a few years when I’ve totally forgotten everything about the game and play it again out of sheer ignorance. That’s pretty bad for a WarioWare game. Every other title in the series is worth revisiting at least every couple of months. I wish the same could be said for WarioWare: Snapped!. A great credits sequence isn’t enough to keep the game from getting a…