You know who’s no one’s all-time favorite videogame character? That’s right, it’s Wario. This Bizarro purple-nosed man-thing has been around for over fifteen years, and over that time some people have grown to like him, many have learned to tolerate him, but no one truly loves him.

Even still, Nintendo keeps giving this ugly man the spotlight, while handsome blokes like Kid Icarus and Little Mac remain chained to a radiator somewhere at Nintendo HQ. This past week, Nintendo actually put Wario head to head against Capcom’s #1 guy for 2D platforming, as Wario Land: Shake It was released on the very same day as Mega Man 9. Whereas the new Mega Man game is very much a love letter to that character’s low-tech, hardcore origins, this new Wario Land title is sort of a hand-drawn, high-res, waggle-enhanced reinvention of the Wario platformer.

If you want to know if I liked the game, then hit that jump and read my words.

If you’ve already bought Mega Man 9, I can save you the effort of reading the rest of this and just tell you — Wario Land: Shake it is the anti-Mega Man 9. If you love the idea of old-school, 2D platformers but hate the way they look and how hard they are to play, then Wario Land: Shake It may be the game for you. It’s the best in Nintendo’s “lite” series of non-Mario plaformers (including games like Super Princess Peach and Yoshi’s Story), but it’s also about as far from hardcore as you can get. 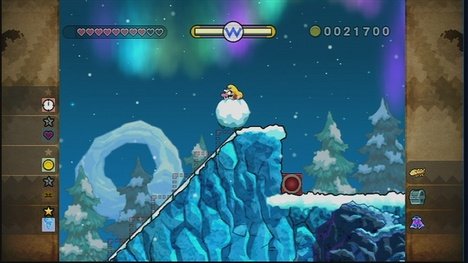 First, I can tell you that the game looks amazing. Wario looked great as a sprite and as polygon based character model, but he definitely looks at his best when hand-drawn. The animation of Wario and the enemies he fights looks as good as any I’ve seen in a 2D videogame. Everything from the tiniest goon to the screen-filling bosses looks absolutely fantastic, and that’s the #1 reason to play the game. These graphics are also the reason the game wouldn’t have been possible on WiiWare, given the Wii’s lack of a hard drive.

While playing Wario Land: Shake it with a group of game-hating friends this past week, I was amazed at how well it went over. That was mostly due to the graphics. The characters are so expressive that even game haters couldn’t help but be charmed by it. The sight of Wario stomping a cute little pirate blob, grabbing him by the face, and shaking him to death was enough to get them all to yell “I love this game!”, though none of them actually wanted to play it. As much as I may love Mega Man 9′s 8-bit look, I must admit that Wario Land: Shake It has it beat in terms of winning over strangers. 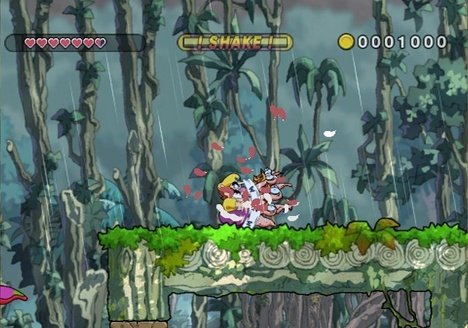 The game’s music is also a draw. It’s a bit heavy-handed at times, but it works. All the songs sound like they are being played by real instruments, which goes a long way with the kind of meatheads (er… I mean, “people”) that still think that videogame music is just a bunch of “bleeps and bloops”. While some of the tracks are no more memorable than the music you may hear while on hold with your cable company, other songs actually evoke the funky days gone by of Fat Albert and His Junkyard band. It’s all a little over-the-top, but it’s never grating.

The developers of Wario Land: Shake It must have caught on to the fact that their game’s music ain’t half bad, because a large part of the game’s reward system involves unlocking its soundtrack. Each level in the game has achievement-esque tasks called “missions”, stuff like “Don’t take any damage for the whole level” or “Collect X amount of gold”. Most of these goals are extremely difficult to pull off on the first try. These missions are a kinder, gentler way to enact the tried and true “this game’s too short, let’s add an Easter Egg hunt at the end” Nintendo trickery that gamers have had to put up with since the N64 days. 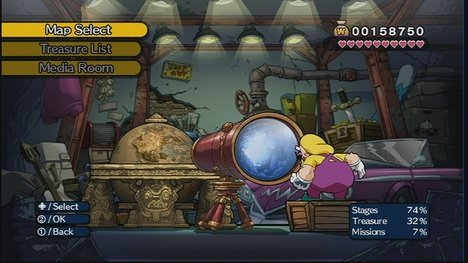 Sadly, Wario Land: Shake It desperately needs this padding in the game length department. It is perhaps the easiest first-party Wii game to date. The game is split into five different maps, containing 17 regular levels, 12 secret levels, and 6 boss fights. If you skip all the secret levels, the whole thing could be over in about five hours. The secret levels are found pretty much at random by smashing different areas with Wario’s new special ground pound move (performed by shaking the Wii Remote). With a FAQ, I’m sure they’d all be easy to find, but if you tough it out on your own, it will be a long time before you find them all.

As for special moves, Wario starts this game completely and utterly over-powered. Traditionally, 2D platformers have been anything but “power fantasies”. Mario, Sonic, Arthur from Ghosts and Goblins, Ladd from Bionic Commando — if any of these guys get hit once or twice without the proper equipment, they’ll be pushing up daisies, potentially forced to start their level, or even their whole game, over. Not so for Wario. He can run up and belly bump most enemies in the game and not get hurt. He’s got unlimited lives. He’s got that ground pound attack that stuns anything on the screen that’s touching the floor. He can stomp enemies, tackle them, or pick them up and throw them. Wario, as a playable character in Wario Land: Shake It, is tougher than any boss that 2D Mario ever fought. Even as the game progresses to the tougher levels, there is rarely a time you have to actively worry about dying. 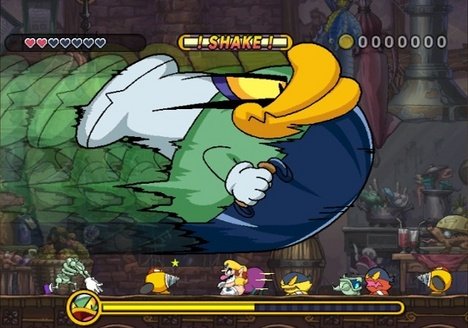 So if the game doesn’t keep you occupied with any sort of need to keep your player from dying, what does it do to keep you busy? Surprisingly, it’s a whole lot of 2D Metroid-style area exploration and environment interactions. While the game doesn’t have the same sense of exploring a huge, nearly limitless world, which the Metroid games have, Wario Land: Shake It does feature the same sort of combing of the environment, searching for secrets. You’ll be constantly trying to find stuff by smashing bricks, crawling through holes, making speed-boosted running jumps, basically looking for any and every potential path to an otherwise inaccessible area.

There is even a toned-down version of “shine sparking” in the game, which adds some much-needed depth to the game’s otherwise straightforward gameplay. Also taken from the world of Metroid is the need to backtrack and escape a level before a timer runs out, except in Wario Land: Shake it, this happens at the end of each and every level. It was during these sequences and the boss battles that I died the most — not from enemy attacks, but just from taking too long. Even then, death still doesn’t mean a lot. You get to restart instantly from the point that the timer started, and Wario’s got that infinite lives thing going anyway. 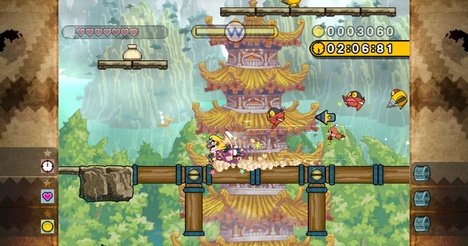 Surprisingly, my one major complaint about Wario Land: Shake it is its lack of personality. You’d think that a Wario game would be filled with weird humor and slightly disturbing insanity, but if anything, Wario Land: Shake it is a tad dry in the style department. Even the relatively tame Super Paper Mario featured more interesting enemies and environments. By contrast, everything about Wario Land: Shake It screams “playing it safe.” There are no wacky references to other Nintendo games, no creepy zombie suits or wacky disguises. There isn’t even any farting. This lack of strange antics is in itself strange. For Wario, it’s normal to be weird. His other hit franchise, the WarioWare series, has made itself famous for its panache for the unpredictable and surreal. To see Wario not even try to act messed up is pretty messed up, and pretty disappointing.

I can wholeheartedly recommend the full-price purchase of Wario Land: Shake It to only three groups of people: kids between 5-10 years old, die-hard fans of hand-drawn animation, and people who love “easy but smart” 2D platformers. The game is top-notch in terms of its look, its controls, and its level design. Then why is it that I kept wanting to stop playing it in favor of another go at Tornado Man’s Time Attack challenge in Mega Man 9? It’s because by comparison, Mega Man 9 is like a brush with death, an edge-of-your-seat thrill ride on a brand new roller coaster, whereas Wario Land : Shake It is more like a leisurely, risk-free hop in the tea cups. If the game had Wario start out with half the amount of special moves, wasn’t so resistant to letting you die, and had some of that trademark Wario weirdness, then I’d be more apt to recommend it to everybody. It’s a shame, because I really want Wario Land: Shake It to succeed, if not just to send the message to developers that home-console, hand-drawn 2D action/platformers didn’t have to die along with the Sega Saturn. Guess I’ll just have to hope for Muramasa to turn out good enough make that point…