I love vikings. Ever since I was a child, I had an illustrated book of Norse mythology which I would happily read with great interest. The best thing about Norse mythology is how everyone, even the good guys, are bad tempered, violent bastards with very little in the way of scruples. Vikings are simply awesome.

If there’s one thing I love just as much as vikings, it’s brutal, bloody action gameplay. Marrying vikings with videogames makes perfect sense, so it’s no surprise that I had high hopes for Sega’s Viking: Battle for Asgard. Featuring bloody combat, full scale military battles and plenty of Norse flavor, there is very little for me to hate in terms of concept.

How does Viking fare, however, in terms of hands-on practice? Let’s find out together. 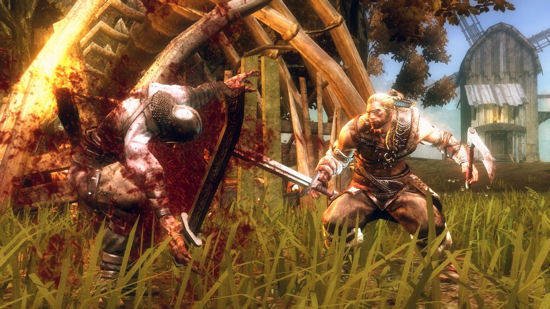 Viking: Battle for Asgard tells the story of a warrior called Skarin who was mortally wounded in a battle against the Goddess Hel and her evil Legion. Rescued by Freya, Skarin is resurrected and sets out to free the world from the grasp of Legion and restore light to Asgard, rescuing his captured kinsmen along the way and raising huge armies to help him reclaim the land. The story is far from exceptional, but it’s narrated by Brian Blessed, who makes everything about ten times superior.

Taking place across three large overworld maps, visited one after another, progression in Viking is a little different from the norm. Rather than a linear set of levels, Skarin is free to travel around each map and take on a variety of tasks to assist his war effort against Legion. Viking troops are held captive in camps and caves around the world, and your job is to find and free them so they will add to your army. The vast majority of the game is centered around this idea, with you slaying Legion troops solo and slowly bolstering your troops. 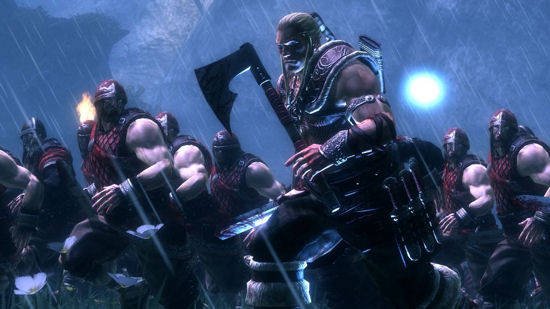 As you play through the game, growing your army and undertaking special missions, you will eventually fulfill enough requirements to go to battle. The battles generally bookend your progression throughout the game, and pit your raised army of vikings against a full warband of Legion, as you take out key targets across the battlefield in order to win.

That’s pretty much all Viking does. You run across a world map undertaking rescue missions or securing key items, which culminate in a full scale battle, before you move onto the next area and do the same. The unique way in which the game progresses is fresh and fun, but it becomes very repetitive and a good deal of gamers won’t be motivated to keep playing.

The main problem is that the game gives you three considerably large world maps, but very little to do in them. In terms of look and space, Viking reminds me at times of Oblivion, except where Oblivion is packed full of missions, characters and items, Viking is barren and gives you very little to do other than the task at hand. A game like this begs to have special weapons and treasure hidden all around the world, but gold is the only thing you can find, and even then, it’s not all that useful. Skarin keeps his same weapons for the entire game, there is no leveling up to be done, and your exploration of the world map will yield no interesting loot. It’s a shame that expansive maps like the ones found in Viking have so little to do except journey from A to B. 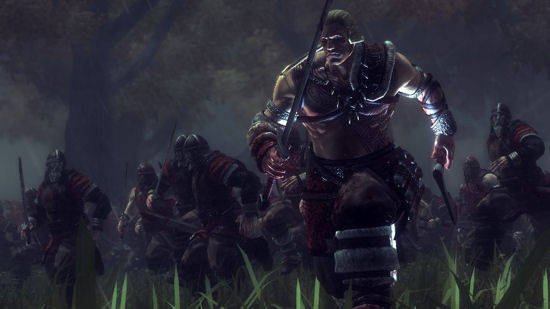 Despite its look and promise, however, Battle for Asgard‘s attention is set more blatantly on fighting than any RPG elements, and this is what you’ll be doing plenty of in Skarin’s quest. Viking‘s control scheme is very standard for the genre, with one button handling quicker, weaker combo attacks, and another dealing with stronger, but slower, blows to the enemy. It’s not inventive, but it works, and that’s the important thing to note. In exchange for gold, you can enter arenas located on each map to bolster your arsenal of attacks with more effective moves, such as a spinning blow that obliterates shields or a very satisfying quick thrust that drives your blade through the enemy’s chest.

Surprisingly, stealth plays a considerable part in Asgard‘s action, but not in the overbearing, tacked-on way that action games are usually guilty of. If an enemy has not seen Skarin, he will instantly enter a stealth mode by keeping his head down and moving with caution. When close enough to the enemy, a simple button press will dispatch him instantly. The sheer ease with which this is done is more pleasing than one may think, and while again, opting for stealth can become repetitive, the no-frills automatic approach to this method is very welcome and lends itself well to the action-driven gameplay.

This automatic approach is applied a lot in Viking. Skarin won’t need prompting in order to hop up ledges or shimmy across narrow spaces. While again, this is a convenience that I’m hard pressed to moan about, it does have its drawbacks. Sometimes you don’t want to hop over a fence, but Skarin will do so of his own accord if you get too close, something I found out all too late as Freya’s champion decided to leap bravely over a fence … and the cliff edge behind it, to his inevitable death. I said Vikings were awesome … didn’t say they were smart. 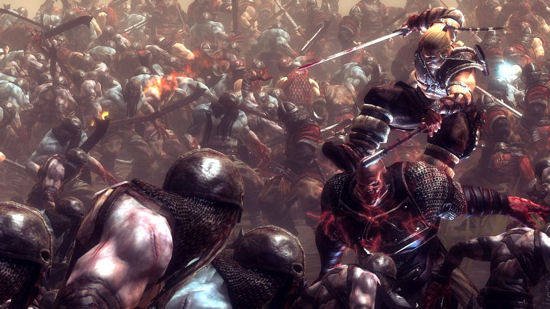 Generally, the combat in Viking is solid and entertaining, especially when you’ve unlocked a few new maneuvers, but it is not without issue. Skarin is very light on crowd clearing attacks, which really hurts the huge battlefield sections of the game. It’s very difficult to travel across the battlefield to fulfill an objective without being backstabbed by the thirty or so Legion troops along the way, and you have no effective means of taking on more than one at a time. Skarin’s attacks are pretty much centered around one-on-one combat, but he’s usually up against at least five Legion at any given time. It’s hard to get any kind of combo going without being taken out by a cheap shot, and you’ll be forced to block a lot more than you’d like.

The frustration is tempered somewhat by the fact that Skarin doesn’t die. Outside of a battle, death will see Skarin respawn at his main camp with only a loss of magic energy as penalty, while death during a battle will have Skarin spawned next to his shaman, ready to enter the fight once again. While suffering a little from BioShock-syndrome, this immortality is helpful given how likely you are to be swamped by enemies and prematurely killed because you were trying to kill one guy and not the ten shoving swords up your ass.

When you get into a good groove, however, the fighting can be a lot of fun. Whittling enough health (or limbs) down to open the enemy up for an excessively violent finisher simply feels right, and once you acquire the ability to counter attack, battles become games of timing as opposed to button mashing. Once you’ve collected some magic energy and used an elemental rune to freeze enemies or set them on fire, things become even more fun. It’s just recommended to play in short bursts rather than extended sessions, because you may tire of the endless slaughter pretty quickly. Hardcore action fans should be pleased, however. 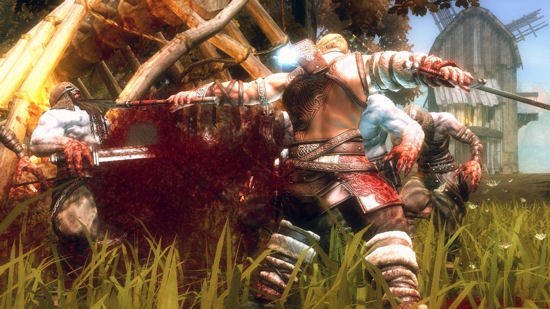 Also on offer, as if it could be a surprise, are quick time events. In battle, these are generally not a problem, as you use them to finish off bigger enemies a’la God of War. However, while I generally don’t have a problem with QTEs, Viking verges on the obnoxious by forcing you to hammer a button rapidly just to perform simple tasks like opening doors. I don’t want to hammer a button over and over just to open a door, but you are expected to do it every time. It’s incredibly redundant and irritating. not helped by the fact that you often have to be positioned in a very exact spot in order to perform any of these actions. Considering Skarin moves like the lumbering viking brute he is, it can be hard to put him in the exact special little spot he needs to stand in, and something that only needed a simple “press X to do Y” command becomes an overly complex farce.

As is typical of a Sega game, Viking looks very good, with an impressive graphical quality and bold visual style. The Legion-infested areas are dark, stormy and foreboding while those areas free of Hel’s influence are scenic and pretty. Viking gives off a more dark and mature Fable vibe in terms of its look, and it’s a look that works.  Sound-wise, the game is nothing special, with typical war drum music and adequate sword clashes. The voiceovers are pretty decent though, and as always, the inclusion of Brian Blessed puts things over the edge. He is just that good. 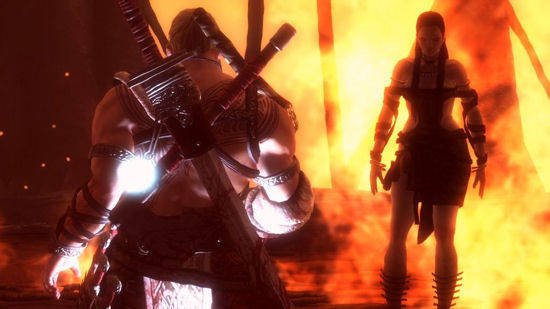 Viking: Battle for Asgard is a great game for people who need something to do until God of War III comes out, and it’s perfect for action junkies who love visceral and brutal fighting but hate to think about things. While those with more refined tastes may do well to stay away, those of us who just like to crack open skulls will be sure to get some enjoyment out of this one. Its repetition is all too readily felt, and a lot of elements reek of missed opportunity, but what Viking does manage to deliver is delivered with style, competence and more than enough blood to keep your thirst for gore satiated. A definite rental for any swordplay fan.

Score: 6.9 (Slightly above average, maybe a little niche. But you wouldn’t recommend it to everybody)