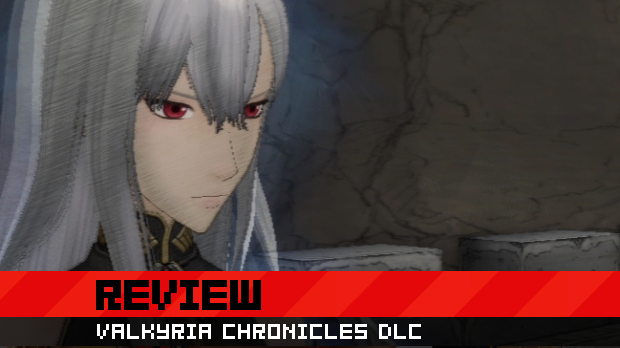 There are two kinds of PS3 owners in the world: those who have bought Valkyria Chronicles, and the ignorant majority who know not of the remarkably action/strategy/RPG combo we here at Destructoid think quite fondly of.

If you’re in the second group, go buy Valkyria Chronicles. Now. Once you’ve finished playing it, come back here and continue reading.

If you’re in the first group, you were probably pretty interested to hear about Sega’s three separate Valkyria DLC packs, released this Thursday. Retailing at five bucks each, “Enter the Edy Detachment,” “Behind Her Blue Flame,” and “Hard EX Mode” offer three very different experiences. But are they worth it? Do these DLC packs add new content and require new strategies of the player? Will they keep you occupied for more than a few minutes? Most importantly, is Jann in any of them?

Hit the jump to find out via a (relatively unconventional) Destructoid review.

Since each of these three DLC packs can be purchased independent of one another, I’m actually going to write three mini-reviews rather than one all-encompassing overview.

This single mission details the exploits of the Edy Detachment, made up of a bunch of characters who don’t matter, and Jann.

Jann, the offensively effeminate Lancer expertly voiced by John DiMaggio, was responsible for most of my enjoyment with this mission pack.

Not to say that “Enter the Edy Detachment” is outright awful, but it’s also nothing to write home about. Edy (the egotistical would-be pop star), Marina (the silent, superhot sniper), Homer (the masochistic engineer), Susie (a pacifist who will literally refuse to shoot at soldiers half the time you tell her to), and a boring Darcsen Shocktrooper named Lynn are tasked with defending a civilian village from attack for three full rounds, at which point Edy must make her way to the south end of the map to save a stranded soldier’s life. While it’s kind of interesting to see all these secondary characters in the spotlight — Jann especially — they don’t really have anything of consequence to say, and their minimalist characterization in the main campaign was so efficient that their few scripted lines throughout the mission didn’t add any player empathy that wasn’t there already.

I adored Marina and Jann even when they only said one or two lines per mission (especially since one of those lines would invariably be, “OOOH! I could get lost in the musclllllllllllles!”). I didn’t adore them any more or less when they started spouting hamhanded “let’s stand up for what’s right” rhetoric.

It also doesn’t help that the actual mission isn’t all that well-designed. While the constant barrage of mortar attacks forces you to keep your characters moving, and while the team’s crappy position between two functioning tanks results in some initially nail-biting defense gameplay, the mission simply falls apart once the player is asked to move Edy from the northmost point of the map to the southmost.

My first time through the mission, I didn’t realize that this new objective didn’t override the old one because the character dialogue seemed to imply that the nearby villagers had all evacuated. I moved all my soldiers away from the capture point they’d spent the last three turns defending, and was a little surprised when a lone scout ran up, took down my flag, and ended my mission. This irritation was exacerbated by the fact that the enemy Scout spawned out of seemingly nowhere. Where typical Valkyria missions demarcate very specific, very visible spawn points for enemies that can be overtaken or at least navigated around, the enemies in “Edy Detachment” spawn in seemingly random numbers in seemingly random areas of the map, which forced me to leave about half my team behind at the capture point just in case some jackass enemy managed to spawn a few inches away without warning. This was tactically successful, but also incredibly boring. I never lost because I made legitimate tactical mistakes; I lost because of awkward mission design.

The single mission only ended up taking me about an hour and a half, even with two or three complete mission restarts. You can evidently get a “better” ending cut scene by getting an A-rank, but considering the cut scene probably just involves Edy being even more of an egotistical bitch than usual, I didn’t feel any real desire to go back and play it again. Five bucks isn’t that much to spend on an hour and a half of entertainment (an averare Blockbuster rental costs $4.31, for Chrissakes), but “Enter the Edy Detachment” is probably the weakest of the three DLC packs.

Behind Her Blue Flame

First things first —  the “Behind Her Blue Flame” pack includes four missions, but it doesn’t seem in any real hurry to inform the player that this is the case. A single playthrough of the pack results in two different levels. The first level is the same no matter what; the second level changes depending on whether or not the player destroys a particular enemy in the first level. The first level, plus the two alternate second levels, adds up to three stages. Once you get an A-ranking on all three of these stages, a fourth bonus mission is unlocked. I played through the “Blue Flame” pack once without knowing any of this since the game never makes it explicit, and it took a quick trip to the GameFAQs forums to convince me that, yes, there are actually four missions in the DLC pack.

Even if there weren’t four, however — even if it there were only the two missions I fought through on my first round of play — “Behind Her Blue Flame” would still be a more substantial and mechanically interesting DLC pack than “Enter the Edy Detachment.”

“Blue Flame” is interesting not only in that it puts you in the shoes of the bad guys during some point in the middle of the campaign timeline, but because it requires totally new strategies of the player thanks to its two main protagonists.  Every Blue Flame mission puts Johann, an engineer, and Selvaria, the well-endowed Valkyria villainess, in the player’s control and essentially forces them to work together. Selvaria, having the speed of a Scout while wielding a nearly godlike machine gun known as the Rhum, is basically a walking death machine. However, she does not carry around any grenades or Ragnaid, which forces her to rely on Johann the engineer for healing her and clearing roadblocks. Johann and Selvaria become a brutally efficient odd couple; both protect one another and fill in the other’s battlefield deficiencies.

Making these two characters simultaneously protect one another, typically while also being forced to defend your home base with a small scattering of Shocktroopers and Lancers, results in some really interesting, if really difficult combat. Playing through “Blue Flame,” I’d simply never before had to worry about so many different, interlocking aspects of my military force at the same time. I was no longer simply worrying about whether or not I’d chosen the right soldiers for the job; I was having to deal with finding a way to flank enemy encampments using only two soldiers, one of whom couldn’t destroy roadblocks and the other who dies after exposure to five seconds of sustained gunfire. I was forced to decide how many action points I could afford to use setting up my home base defense, when my two mission-critical fighters were deep in enemy territory and tantalizingly close to their final objective.

The missions are often designed in such a way that Johann and Selvaria are usually in the most danger and thus, unfortunately, more likely to force the player to restart the entire mission upon one of their deaths. This can be frustrating, but, unlike those failures I experienced in the “Edy Detachment” DLC, I was entirely to blame for every game over. Still, it would have been nice if there were some method of resuscitating either protagonist, just to prevent the missions from being so unforgiving and restart-heavy.

I ended up spending about two hours on just those first two levels alone, but they were definitely more strategically demanding and well-designed than the “Edy’s Detachment” map pack.

On an unrelated note, there’s also a sort of quiet sadness in triumphing the successes of a group of sympathetic characters whom you know are not only “bad guys,” but who will eventually be mercilessly slaughtered by the “good guys” in Valkyria Chronicles‘ regular campaign mode.

Of all the DLC packs, “Behind Her Blue Flame” is probably my favorite.

Why is it, exactly, that Super Duper Ball Busting Hard Mode DLC only tends to get made for games that don’t require it? The absolute last thing Mega Man 9 needed was an arbitrary difficulty boost, and Valkyria Chronicles is as well-balanced a strategy game I’ve yet played. I did not expect to find Sega offering an Expert mode which takes away Welkin’s tank, improves enemy AI and firepower, and adds a few new weapons.

After playing a few skirmish missions on Expert mode (which is accessible only if you’ve already beaten the main campaign once), I can safely say that I am in no reasonable position to adequately judge the quality of this new difficulty mode. It certainly seems rather nice — the enemy positions and map objectives for each skirmish have been changed to the point that you might as well be playing different levels entirely — but it’s so goddamned punishing that I have not yet been able to complete a single mission despite at least a dozen  attempts over the last few days.

In many ways, I think your mileage with Expert mode depends on what kind of a Valkyria Chronicles player you were doing the main game. If you tended to use only a few units at a time and generally didn’t mess around with Welkin’s tank too much, then Expert probably won’t force you to adopt any new strategies outside of being way, way more careful than you’re used to being. If you were the opposite sort of player, then these new Expert skirmishes will probably feel like a totally new, remarkably punishing campaign mode. Perhaps too punishing, given how pleasantly difficult the game was in the first place.

If you don’t mind dying over and over and over again and would consider new enemy placement and unit restrictions a sufficient change of pace rather than arbitrary increase in difficulty, Hard EX mode may be worth the five bucks. If you were pretty happy with Valkyria Chronicles’ difficulty level to begin with, however, you might find a purchase of Hard EX mode not entirely unlike paying a stranger five dollars to repeatedly bludgeon you in the kneecaps with a ball peen hammer. With that in mind, it’d be futile for me to attempt to place a numerical score on a DLC pack that I couldn’t even complete all the way to the end. There’s a lot of content there and it’s really hard to get to, but it’s totally up to you if Hard EX mode is worth the five bucks and potential frustration.