It’s been a long, hard road for Lara Croft. Her first appearance in videogames was received well by critics and the public alike, not least for her fetching figure and acrobatic gameplay. As time moved on, however, Lara simply didn’t and the series began to stagnate.

Then Crystal Dynamics came along to take a stab at the femme fatale treasure hunter with Tomb Raider: Legend. With some gameplay tweaks and an improved camera, Lara felt back on top of her game.

Can Lara hit again? I give you our review of Tomb Raider: Underworld after the jump. 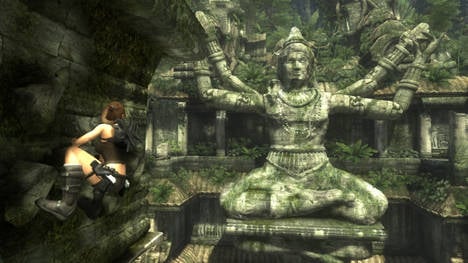 Tomb Raider Underworld is a sequel in the truest sense of the word. Its plot is dependent upon the previous title in the series, Legend, to lay the groundwork for this latest escapade as well as for introducing central characters in the story. While you could certainly play this second game without the benefit of the first, it loses much of the urgency and emotional attachment without that experience.

The plot centers around Lara continuing the search to discover what happened to her mother who, as it is revealed in Legend, has been spirited away to the land of Avalon from Arthurian legend. What follows is a somewhat uncomfortable mish-mash of underworld myths from varying cultures crammed together in a tiny box, shaken vigorously and used as garnish atop the Viking legend of Ragnarok.

Were it not for Lara’s very personal motivations, the whole exercise would feel unfocused and rather silly. Thankfully, her history as a character manages to prevent it from being a complete wreck. I found myself interested to see if she would ever be reunited with her lost family and, thus, able to dismiss some of the more questionable elements. 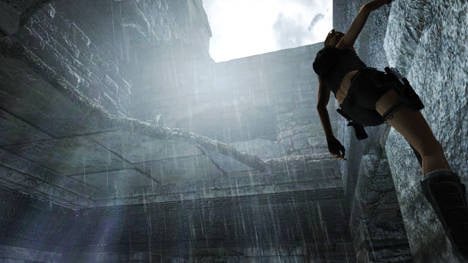 Tomb Raider has often made a real effort in the visual aspects and, for the most part, Underworld is no exception. The world looks vibrant and beautiful and creatures move with preternatural grace. Crystal Dynamics has done an excellent job with these elements.

Lara, however, has not fared so impressively. Her running and jumping animations are fine and she moves pretty well in water. Then you come to a point where you’re scaling a wall with footholds (think rock climbing walls) and things take a turn for the creepy. Her legs suddenly become rubbery and stretch in ways that don’t seem humanly possible. It might seem like a small issue, but these climbing walls occur frequently enough that it becomes really noticeable and it just weirded me out. 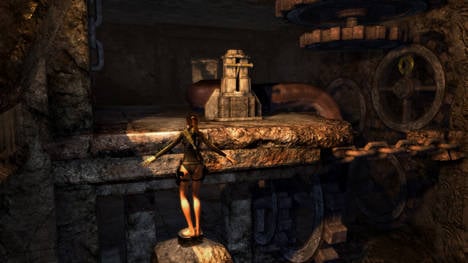 As is always the case with Tomb Raider games, the emphasis of play lies with pathfinding. Lara must scale sheer walls, shimmy across ledges and make dramatic leaps to cross rooms and reach objectives. Most of the time, these paths are fairly obvious once you’ve managed to find where they begin, but that can be a challenge in itself.

The problem here lies in the size of the environments. Many of the locations you visit are absolutely huge. Picking out where you need to go to start the next series of climbs and jumps can be a frustrating affair, as you scan every wall and object to see if it’s climbable. The camera sometimes aggravates this by obscuring your view from behind objects.

Lara controls quite well and lends a bit of a forgiving nature to traversing the environments. She will automatically correct for you if you should not quite have a jump lined up exactly right. This is not to say that you will not die a ridiculous number of times because you’ve screwed up where you are trying to land, but it does cut down on that considerably. 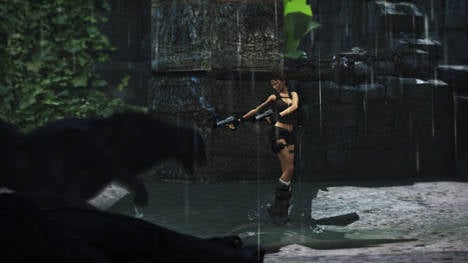 The exception to Lara’s generally superior mobility is in combat. A large portion of the difficulty in fighting enemies comes from the camera and the lock-on targeting. Since you choose which enemy you are targeting with the same analog control that you operate the camera with, even minor adjustments to your view will result in targeting a different (and often the wrong) opponent. Add to this the fact that everything which moves on more than two legs does so much more quickly than you can possibly dodge it, and you’ll find yourself taking unneeded and often surprising damage while you fight.

The “puzzles” (and I use the term loosely) range from being predictable to downright annoying. They all consist of finding the missing object in a mechanism, replacing it and operating the device to open a door into the next area. There are no surprises except for when you are given no indication whatsoever as to what you need to collect to make them work. Just once, I’d like to see a puzzle that requires real thought and actually screws you for doing it wrong. Is that so much to ask? 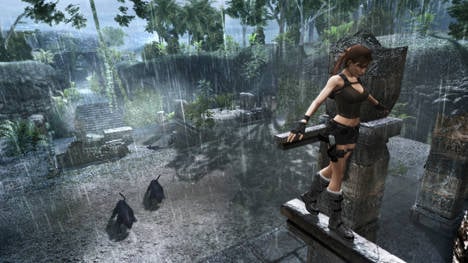 One particularly annoying example of poor level design features three large areas with a puzzle that looks obvious until you attempt to actually solve it, whereupon you realize that the device you need to manipulate does not function without pieces that you would not even notice were absent. Then, you must trek all over this massive environment (using a motorcycle; that’s how large of an area we’re talking about here), trying to locate the bits that you’re missing. It’s a needlessly frustrating situation that could have been remedied simply by having access to what Lara is thinking through the use of a better system of objectives.

After you’ve finished the main storyline, the game unlocks a “Treasure Hunt” mode. For completists, this is a godsend. Rather than force you to play through the entire game to find the treasures that you missed along the way, this mode allows you to revisit the game’s levels and track down collectibles without having to muck about solving the puzzles a second time. It’s a nice touch that helps validate the existence of all the little crap there is to find, as it encourages replay value without punishing the player who wants it.

On the whole, it’s a mediocre game and a disappointing follow-up to the quite impressive Legend. It does very little to further the series and offers much frustration in exchange. Fans of Tomb Raider will no doubt love it, as it is still superior to many of the titles past the first, but Underworld will not do anything to change the minds of people who have less of an affinity for the games.

Score: 5 – Mediocre (5s are an exercise in apathy, neither Solid nor Liquid. Not exactly bad, but not very good either. Just a bit “meh,” really.)