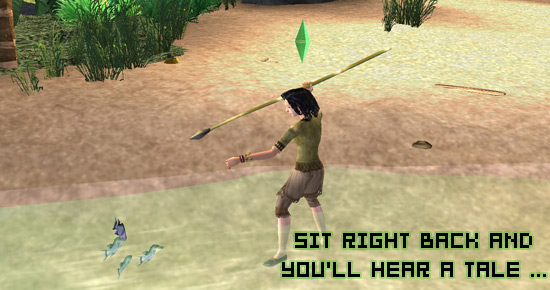 Selling millions of copies is an excellent achievement, but I don’t think anyone would disagree that the formula behind The Sims has grown a bit stale over the last seven years. At this point everyone who could possibly love the virtual doll house gimmick has already dressed, undressed and simulated virtual copulation with said dolls, and the whole thing is wearing rather thin. Which is why when EA announced they would be creating drastically different Sims titles, you could almost hear the collective ears of the mainstream market perk up in unison like so many curious German Shepherds.

The Sims 2 Castaway is a huge departure from previous titles. Where you once had an idyllic suburb setting, you now have to contend with the wilds of a tropical island. Alone, stranded, and hungry, you’re forced to fight the elements and your own penchant for insanity, as you create a new life for yourself in this virtual paradise.

Of course, you could have gathered all of that from the back of the box, and if you’re reading the review here you’re wondering how the thing actually plays, how awesome it is to enslave monkeys, and whether or not you can make it with inanimate objects.  For those answers and more, hit that jump.

First, a few qualifiers: as you can see from the bolded infoblurb directly above this text, Castaway has been released on every platform short of the Amiga. As every iteration other than the DS one is extremely similar, I’ve decided to mainly focus on the Wii build.

The Sims 2 Castaway once again puts you in the shoes of a very narrow minded deity, only this time you’re tasked with watching over either a single Sim or a crew of Sims as they try to eke out an existence after being marooned on a tropical island. Normally these sorts of premises demonstrate the dangers of starvation, loneliness and exposure, and while these are issues the Sims confront, they do so in the traditional Sims style: with tons of color, adorably unintelligible Simlish and a few humorous quirks that make this appropriate for the entire family regardless of the underlying darkness behind the situation.

Traditional Sims games have relied on a point-and-click interface owing to their origin on the PC. This control scheme works wonders when trying to add new players to the fold, but when ported to a console that lacks such a pointing device, generally the results have been less than ideal. On the Wii, a console with an innate pointing device, the developers have opted to forgo tradition and have instead installed a very console-centric control scheme. The Sims themselves are navigated via joystick, and while the Wiimote is used as a pointer from time to time, the new control scheme should feel very familiar to anyone who has ever played a 3rd person console title.

Graphically the game is exactly what you’d expect from a second generation Sims game: no one is going to be blown away by the graphics, but they’re accessible, friendly, and appealing to anyone with a soul. The characters have been altered a bit in this iteration from their previous models; they’ve been made thinner, and while this could be some subtle magnification of the effects of starvation on those having to go without the comforts of modern life, people familiar with the old models will be split on the appeal of the new ones. Personally, I think if they were going to muck about with the models, they should have thinned them down even further and gone for a drastic stylistic change. As is, the changes are just so insignificant as to make you wonder why they were ever made.

Due to the premise — and to further distance itself as a separate product — the gameplay in Castaway more closely resembles that of the recently released MySims than it does those iterations of The Sims that it resembles superficially. You have resources to gather, three islands to explore (that — in true console fashion — are filled with unlockable areas only accessible with certain item acquisitions), and the possibility of a resolution to the story. While PC versions of The Sims were functionally giant sandboxes whose only purpose was to allow for free expression of creativity, it is quite possible to escape the island in Castaway, thus demonstrating the kind of console-friendly conflict resolution that would be applauded if only the traditional infinite sandbox style wasn’t what made the series the massive success it has been in the past. There is a possiblity of using the island in that way eventually, but most of the game seems to consist of the kind of quests for resources that would be more at home in a Final Fantasy title.

Of course, the inclusion of the monkeys makes those quests at least a bit more palatable. The trio of chimps you can domesticate were a clever design decision that not only provides an expedited way to end the drudgery of resource collection (it’s literally so simple a monkey could do it), but they also provide comic relief. Everyone loves monkeys and short of having them appear in a movie with Clint Eastwood, they couldn’t do a better job of providing their species’ trademark wacky antics.

Aside from the sandbox ideal we covered above, the other impetus behind The Sims is rampant capitalism. In Darwinian terms, Will Wright is the natural predator of Marxist theory, and each Sims title has provided players with a canvas on which they can paint broad strokes of materialist greed. You’d think that couldn’t possibly have survived the boat ride to the island, but once you’ve got your supply chain running with great efficiency, and have discovered proper blueprints, you find that your island-bound Sims are every bit the fashion whores that their mainland brethren were.

You can construct clothing, furniture, and shelters and as in past games, each item benefits a certain set of your Sims’ personal requirements. In my favorite instance of this, you (or your appointed Tom Hanks replication) can cobble together a friend for your Sim from inanimate objects, and while it allows you to momentarily escape from the crushing loneliness of island life, the fact that you can get a bit romantic with the thing is both sort of gross, and the greatest design choice in the game!

Castaway is a title seemingly filled with conflicting ideas. While it will attract fans of The Sims previous games, they may be turned off by its console-centric changes and the shift away from true sandbox-style play. Of course, new players looking to get into the series may appreciate these changes, but one wonders how many people on the planet have yet to play The Sims. Very little of that matters though, as Castaway is an entertaining game that offers plenty of gameplay for the price. It won’t take the crown of greatest Sims title in history, but for fans of the premise or series, it still gets a recommendation, at least on the Wii.